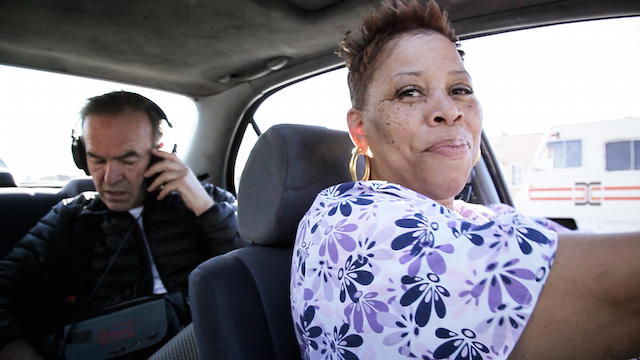 Tonight on HBO is another important and infuriating documentary about Los Angeles that's premiering to less fanfare than Going Clear. Nick Broomfield's Tales Of The Grim Sleeper explores the infamous serial murderer whose spree dates back as far as 1985 and whose victims—primarily prostitutes from South Central—could number in the dozens. Despite the potential magnitude of of the Grim Sleeper's spree, the case hardly got much attention until L.A. Weekly wrote about the murders in 2008.

Although the London-born, Los Angeles-based filmmaker—best known for Biggie & Tupac and Kurt & Courtney—has often been criticized for putting himself at the center of his documentaries, in Grim Sleeper he gives the individuals from the neighborhood more than enough space to tell their stories. Early on in the film, a local woman named Pam Brooks starts to tag along with Broomfield and his cameraman (his son, Barney) and becomes an essential member of the documentary crew. Through Brooks, locals—including survivors—begin to open up in front of the camera for them.

In 2010, the LAPD finally had a major breakthrough in the case and arrested then-57-year old Lonnie Franklin, Jr. The forensic evidence in the case is damning enough that Broomfield doesn't even bother to question whether Franklin is guilty or not. His excellent documentary explores not just the particular set of circumstances surrounding the case but also critically examines the institutional neglect from the police, civic leaders, and the media for 25 years. It is almost no wonder the killings went on for so long.

Ahead of Tales Of The Grim Sleeper's premiere on HBO tonight, director Nick Broomfield took the time to talk to LAist about being a fish out of water working in South Central, the film's reception by members of the LAPD, and how it has become a part of the larger conversation about the police. 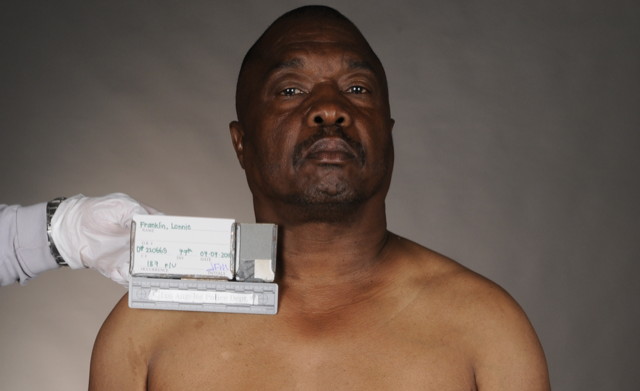 How did you get interested in the Grim Sleeper case in the first place?

I think I remember at the time of the arrest I read a series of articles written by Christine Pelisek in L.A. Weekly that were very amazing. I also really wanted to do this story because I had spent a lot of time in Johannesburg as well, and L.A. has always really reminded me of Johannesburg in being racially divided. I felt that this story could have only occurred in a very racially divided city. With that question of how was it possible for this to go on for 25 years... I felt it was a basis for a film.

Did you reach out to Ms. Pelisek to participate in your film?

I did! I did! But she was actually doing her own film for Lifetime and her agent advised her it would be a conflict of interest to take part in my film.

In the beginning of the film there's that part where Lonnie's friends Steve, Richard and Gary are taunting you from afar—calling you "peckerwood"—but aside from Lonnie's friends were you otherwise welcomed in the neighborhood? Did people not make much of your presence in the first place?

The remarks that aren't in the film, like, "I'm gonna cap your ass!"... I never took them terribly seriously. But the cameraman I had at the time decided he was going to leave the production. Much as I did try to reassure him that they weren't going to cap his ass, he decided to leave. That was a bit of a problem.

But I think all in all it went very well once people realized we were going to be around there for a while and we were taking the story seriously. For most of them that might've been the first time somebody really wanted to hear their point of view without a vested interest. Plus I think we all had a lot of fun together.

How long did you spend filming in those neighborhoods in South L.A.?

Initially we shot a solid three months, every day. Probably here and there for another year, because we were still waiting for the trial to happen. Which of course still hasn't happened.

Steve, Richard and Gary at first were quite defensive and denied many of the things Lonnie was accused of doing. Individually they all opened up to you and revealed more. Why do you think collectively they were all protective of their friend, but once you got them one-on-one they opened up?

Well I think collectively they decide to support their friend Lonnie. And then one-by-one, they called up and said, "Look, don't tell Richard..." or "Don't tell Gary, but I think I know something else." They literally did that.

I think the other thing was that making a film makes people quite introspective. It puts them under a microscope and they probably ask themselves questions they've avoided asking before—about their friendship and association with Lonnie. Like, "I remember those handcuffs hanging out of his car" or "Oh yeah what was with that .25 automatic [handgun]?" It was all those things that they remember, and started putting different thoughts together. And the more thoughts they put together, the more disturbed they were so closely associated with these murders. Now they want to distance themselves from what happened.

Pam Brooks becomes one of the central figures of the film. How did you meet her in the first place?

She was someone we met four days in. We had an office nearby and people would drop by. Pam would drop by and place dice with my son Barney, who took over as cameraperson. They developed a friendship all of their own.

Pam started coming out with us in the car when were in the streets. Of course we discovered that having her in the car meant that people would really talk to us. If it was two white guys—or even with Richard in the car—it was a whole different thing. But Pam was an amazing kind of ambassador into that neighborhood. She was able to get people we would never, ever be able to talk to tell us about their lives and their stories. 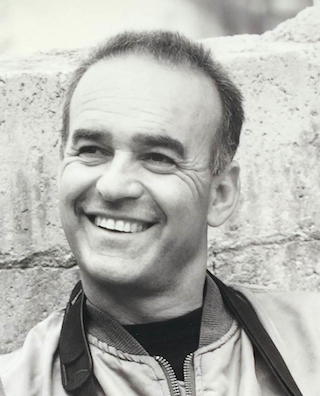 Filmmaker Nick Broomfield (Courtesy of HBO)
Was word getting out that here were these two white guys in South LA making a film about the Grim Sleeper so people just started dropping by?

Pretty much. We also were working with Tiffany Haddish, who was a local comedian. She's actually now rather famous, as part of Kevin Hart's Real Husbands of Hollywood. But at that time, she was just doing the odd standup at the Laugh Factory. She grew up on the street next to Lonnie's, and a lot of people liked her. Before we had Pam, we had Tiffany. Pam took over and she knew a lot of the women personally. We always had someone from the community with us.

I read in your Film Comment interview you mentioned a lot of things obviously didn't make final cut. I'm really intrigued by the female slave you say Lonnie had. Of all the crazy things Lonnie is alleged to have done that didn't make the film...

It was a very strange story. It was this woman he was driving in the back of his truck for a couple of weeks. I guess doing sexual favors to whomever wished. People just seemed to accept it.

It was one of those stories that raised more questions than it answered. It was so bizarre and so weird. Frankly what I thought the film was already about weird set of stories, and to suddenly throw in this story about a woman in the back of the van... it takes on a whole new other dimension. It raises so many questions which I couldn't answer. I don't know what happened to this woman. I don't know where where she came from... I don't know really why people...

I don't really get a sense of how other people in the community reacted to it. Except that I thought it would prejudice the audience against a whole community. Do you know what I mean?

Well I guess my main question was if you knew what became of that woman, but I guess not.

I don't know what became of her. I think only Lonnie can answer that. I think he must have sold her on to somebody else. It is one of the most bizarre stories I encountered. I don't know. One of those things in journalism is that you need to sort of vaguely answer the question yourself instead of just dumping information out there. Particularly if it's not properly researched. And I couldn't really get any answers.

I know you invited people from the neighborhood to a screening of it at AFI FEST. Who came out? Was it a lot of the subjects from the film?

I let everybody I could possibly know in the community. We had flyers at stores. I drove around to a number of houses to let people know. I called all the people whose phone numbers were still working. A lot of people came. The LAPD Grim Sleeper task force came. The DA came. It was a pretty good attendance. It was packed.

What was their general reaction to the film?

There was a lot of guffawing and screaming at the screen. It was the most lively screening I've had for a film. People would respond to things on the screen. I remember Enietra Washington, one of the survivors, coming out with a comment in the film, "Lonnie was a titty sucker." And somebody screamed out, "Never sucked my titties!" And other people were shouting out in other parts of the cinema. It was really unbelievable.

Did the people from the neighborhood you filmed think you were fair to them?

That question never even arose. There have been a lot of screenings in the community. Not only in South Central—but in Watts, Oakland, Ferguson. Margaret Prescott and the Black Coalition Fighting Back Serial Murders have used this film all over the country. Mainly with groups who are trying to question police activity in various parts of the country.

Have you gotten a response from the LAPD?

[pause] The LAPD were very complimentary, surprisingly enough. Dennis Kilcoyne, the lead detective who headed the task force for a number of years and is now retired, came up to me after a screening and said "It's a really good film." Which I wasn't expecting.

You were definitely hard on the LAPD in the film.

Well I think they deserved it! And there should be an inquiry into how this was possible. But I think it's very much a part of the national debate about police practices and how the police should be controlled and monitored. In other words I don't think it's just the LAPD—it's a nationwide problem.

When you started making this film, did you have that national conversation in mind?

No I didn't. I started the film before Ferguson, so it sort of became part of the zeitgeist. Which has been one of the most astonishing things about the film. It's now a part of the debate and moment.

Tales Of The Grim Sleeper airs Monday night at 9 p.m. on HBO.