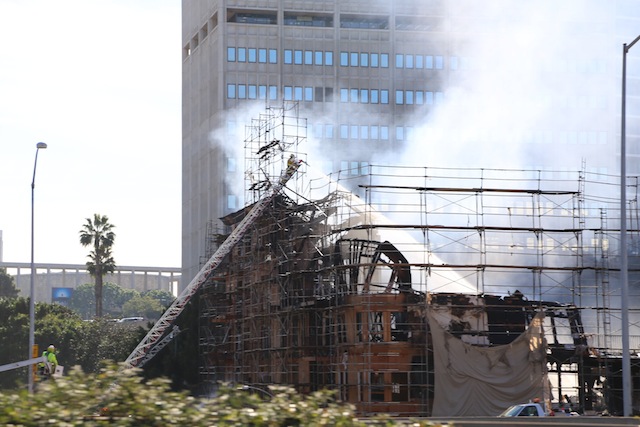 This building has seen better days (Photo by Eugene Lee/LAist)

Geoffrey Palmer is rebuilding his Da Vinci complex, mostly with insurance money he received after someone torched it. He defends his controversial complexes, calling their design one of 'timeless beauty.'

The wreckage has been cleared and developer Geoffrey Palmer is now moving ahead with rebuilding the portion of his Da Vinci apartment complex that someone lit on fire on December 8, 2014, according to Downtown News. The rebuild is being entirely covered by insurance money and should take about 10 months. Meanwhile, the part of the complex that wasn't set on fire will see its first tenants move in this month.

Palmer hasn't been the most popular developer, building a series of insular fortress-like complexes near downtown's freeways that critics feel cut off the tenants from the rest of the city. In a recent interview done via email with L.A. Magazine, Palmer defended himself and his buildings.

The few critics are usually those poverty advocates that feel justifiably upset at the gentrification of downtown, which we symbolize. Others are less sophisticated and don’t appreciate the award-winning classical architectural designs and timeless beauty we bring to downtown’s heretofore urban decay and blight. The proof is in our success. We continue to maintain the highest occupancy and rents in the area as we remain the leader and largest provider of downtown luxury resort communities.

Many critics would disagree with the "timeless beauty." Curbed called them "fucking ugly" and "vacuums designed to suck the life out of a neighborhood that has worked so hard to become lively in the past decade."

Larry Gross of the tenant advocacy group The Coalition for Economic Survival told KPCC that Palmer is the "symbolic anti-affordable housing developer in the city," bringing up a lawsuit Palmer filed and won against the City challenging the 1991 zoning requirement that would have forced him to include affordable housing in his Piero II project.

His complexes also often face inward with pedestrian bridges connecting them, shutting their tenants off from the rest of the city. On a recent walk, I noticed that the ledges of the parking garage 'windows' at the Medici had anti-homeless spikes on them, preventing anyone from sitting on them. (If you know of other spikes or anti-homeless measures around town, send us photos or tips here.) 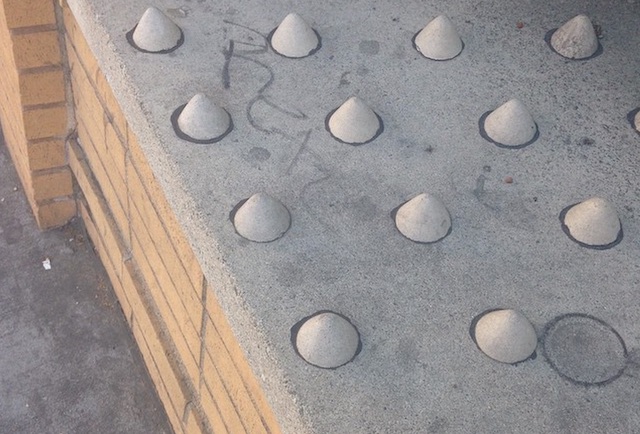 Spikes around the Medici in downtown L.A. (Photo by Juliet Bennett Rylah/LAist)

Palmer told L.A. Magazine that he has "no personal theories" as to who started the fire, "other than there is unfortunately senseless evil in the world." He also hopes the reward—now up to $170,000—might spark someone to come forward with information. Investigators have not made any arrests yet, but one fire official told neighborhood group that they had an suspect on video.