Fried chicken may be best known as Southern soul food, but Los Angeles has got more than enough soul of its own when it comes to the crispy bird game. While you can find KFC and Popeye's all over the Southland, you'd be crazy not to indulge in the home-grown cluck stars that have made Angelenos use extra napkins for decades.

Los Angeles has been a fried chicken town ever since H.R. Kaufman opened the first Pioneer Take-Out in Echo Park in 1961. Nowadays, most of the Pioneer Chicken stands are gone, but you can still get your fried chicken fix just about anywhere in the city. Whether you like high-end chicken with a solid pedigree or quick-and-easy buckets from old school chicken champions, there's something for every type of fried chicken fan in Los Angeles. From South Bay soul spots to classy Brentwood platters with Thomas Keller's DNA, here are our top picks for the best fried chicken in L.A. 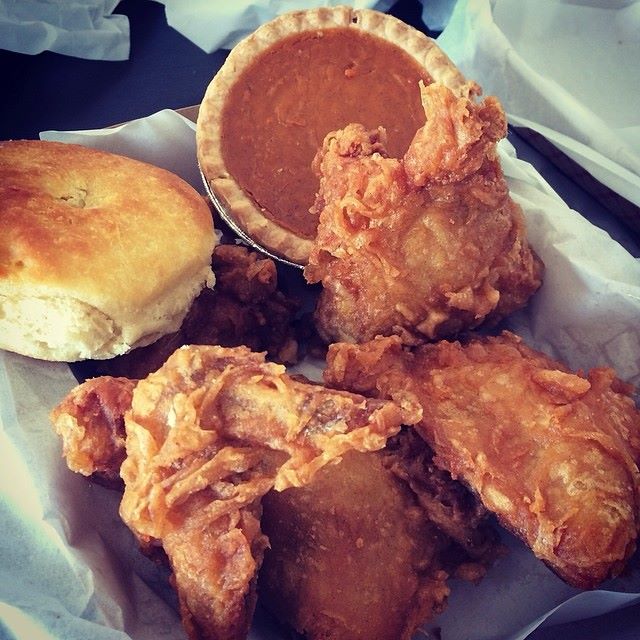 Culver City gets a lot of attention for the restaurants that have taken over Downtown CC for the better part of the last decade, but Honey's Kettle may just be the best that Culver has to offer. Owner Vincent Williams pressure-cooks his all-natural hand-dipped chicken in peanut oil and claims the cooking process makes the finished product healthier than most fried chicken. Instead of deep fryers, he uses stainless steel kettle drums to try to replicate the tradition of frying in black kettles over a fireplace. The finished product is a super-crispy crust that keeps the chicken completely moist inside without seeming greasy. 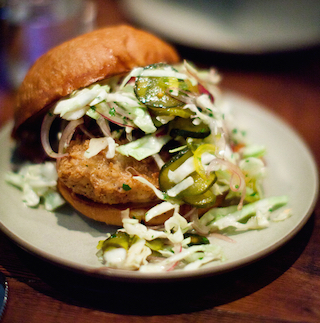 There's only one fried chicken dish on the menu here, but it's so good that you can't make a list of the best L.A. fried chicken without it. Jon Shook and Vinny Dotolo of Animal fame opened Son of a Gun as a tribute to their Floridian seafood roots, but they also decided to offer up their version of the famed fried chicken sandwich from Oakland's Bakesale Betty bakery. The result is divine. An oversized breast gets buttermilk-battered and fried, then topped with a vinegary slaw made from cabbage, bread and butter pickles, red onions, jalapeños, and pickle juice before perching atop a bun slathered in garlicky hot sauce aioli. As soon as you finish, you'll immediately start craving another. 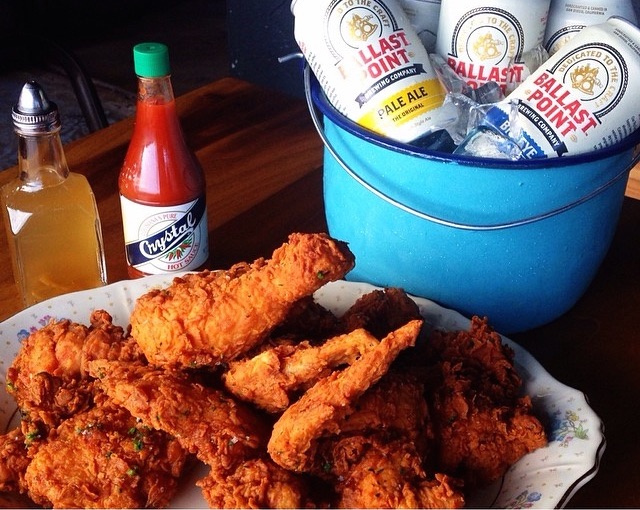 The name may sound like a Confederate-themed sitcom, but the fried chicken here is no joke. While the rest of this stretch of Sawtelle is known for ramen and other pan-Pacific delights, F&TLGS is carrying the torch of the American South with their limited-time-only fried chicken. You can't get it at dinner, so either head in for lunch or mosey back during happy hour to check out their three-piece meal that comes with hot sauce and a spiked local honey to customize each bite as you see fit. At $9 for the chicken and another $3 for a can of craft beer, you'll definitely be emphasizing the "happy" in happy hour. 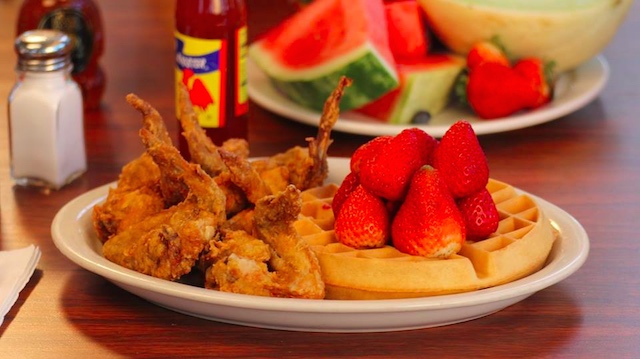 The Googie architecture of this Inglewood coffeeshop has been welcoming locals and food-lovers alike since George and Rena Panagopoulos opened the restaurant in 1958. More than just a stop on the way to LAX, Pann's is a throwback to the '50s diner scene and, while you can't go wrong with their homemade corned beef hash (weekends only) or the country-fried steak, the real star here is the fried chicken—especially their big, meaty wings. Opt for the classic chicken and waffles with a freshly-made Belgian beauty underneath or go for the full platter that comes with your choice of sides. No matter which route you choose, you'll wind up with a historically good plate of chicken. 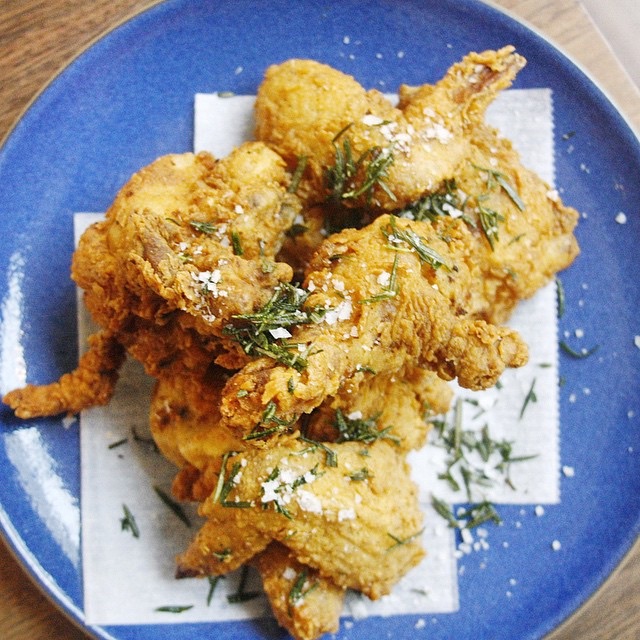 Years ago, the most upscale fried chicken in the country could be found every other Monday at Thomas Keller's Ad Hoc in Yountville, CA. Jeff Cerciello, one of the chefs responsible for that sought-after special, opened Farmshop in 2010 and brought the famous fried chicken with him. Now visitors to the Brentwood Country Mart can feast on the succulent bird every Sunday night. The menu changes regularly—a recent version saw juicy fried Jidori chicken served with Rancho Gordo lima beans, coquille black olives, parsley pesto, and piquillo peppers—but no matter how it's prepared, this is definitely fried chicken worthy of closing out your week.

Flossie's may not look like much from the outside, but this Torrance strip mall gem is serving up the best fried chicken in the South Bay. While the rest of the soul food menu can be tempting, it's nearly impossible to pass on Flossie's perfectly crunchy exterior that covers the juicy chicken inside like the tastiest cracklin' jacket around. Over the past few years, Flossie's started frying the chicken to order which means longer wait times, but an absolutely better final product fresh out of the fryer and ready to pair with mac & cheese, candied yams, and a slice of sweet potato pie. 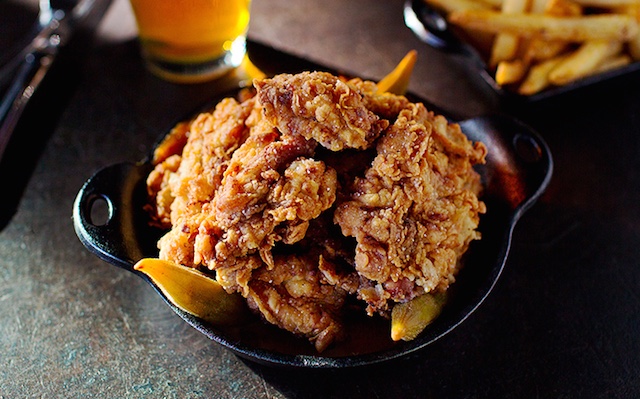 This gastropub mini-chain has made a name for itself with creative burger ingredients like ketchup leather and dashi cheese, but fowl fans know it for the smokey-fried Jidori chicken, available in both sandwich form and as an entree. Chef Ernesto Uchimura's chicken isn't just thrown into a fryer. It's cold-smoked with hickory wood then brined for six hours in buttermilk and spices. After it's fully brined, the chicken is fried and served with a smoked giblet milk gravy, sweet yam preserves, and pickled okra. It's one of the most labor-intensive fried chicken dishes in town and you can taste the effort in every bite.

A classic combination—from Roscoe's House of Chicken and Waffles, of course (via Facebook)

ROSCOE'S HOUSE OF CHICKEN AND WAFFLES

Roscoe's isn't just a restaurant. It's an institution. With seven locations scattered around LA and parts south (Anaheim, Long Beach), it's safe to say that there is nobody more well-known for the holy combination of crispy fried chicken and sweet, syrup-covered waffles than Roscoe's. The original Hollywood location opened in 1975, which means the people of Los Angeles have been happily devouring this fried chicken for forty years now. Go a little lighter with the Carol C. Special (one breast, one waffle) or load up like Redd Foxx used to with Herb's Special, a half-chicken fried golden brown on top of two giant waffles. You won't be leaving hungry.