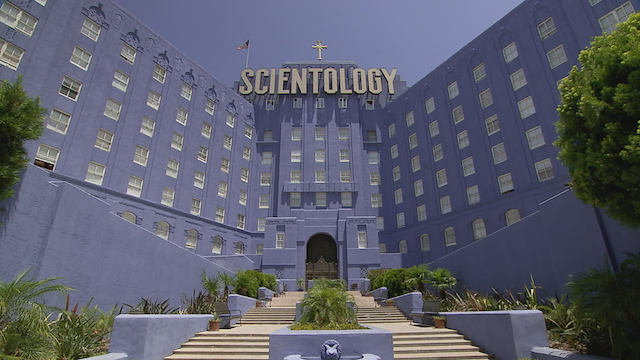 The Church of Scientology's Pacific Area Command Center in Hollywood. (Courtesy of HBO)

Filmmaker and outspoken Scientology defector Paul Haggis says somebody in the Church recently tried to get to him by pretending to be a Time magazine reporter.

Haggis says he got an email on April 7 from a writer named Mark Webber who wanted to talk to him about "the 'golden age' of film." However, once Haggis forwarded the email to his staff, they did a little digging when they felt something seemed off in the request. The Hollywood Reporter has the email reprinted, and it partly reads:


I am writing a piece for Time Magazine on the 'golden age' of film. - I would very much like to interview you for the piece and include "Crash" as a example of recent film that has that beautiful cinematic 'touch'.

Your cover is blown, Scientology spy! Godard never does interviews.

Further investigation by Haggis' team found nobody named "Mark Webber" with any Time or national clips, and Time's arts editor said they had nobody with that name on any assignment. Looking into the email itself, they found it had been sent from a Scientology-owned building on the 5100 block of Franklin Avenue.

"Mark Webber" disappeared once Haggis responded asking for a phone number, and Haggis says he's not sure what Scientology would get out of talking to him. "Was it bait and switch? Get me to agree to the interview about my work and then ask if it could be in person?" he told The Underground Bunker, a news blog devoted to Scientology news. He goes on to say that forcing devotees into "interviews" under false pretenses was a common tactic used by the Church, as was using quotes by their outspoken critics out of context in their propaganda.

Mike Rinder, a former senior executive in the church who is also now an outspoken critic, told The Underground Bunker that this was probably a simple case of reconnaissance by the Church. "It's an effort to get information... about what he may be working on, who he may be working with, anything Scientology-related," he said.

As nefarious as this sounds, this barely begins to scratch the surface of kookiness and evil the Church has been accused of doing, recently outlined the HBO documentary Going Clear.

Update [4/18]: Church of Scientology spokeswoman Karin Pouw says, "The Church knows nothing about this" and that Haggis' story is "fabricated." The Church's response to HBO's Going Clear can be seen here.