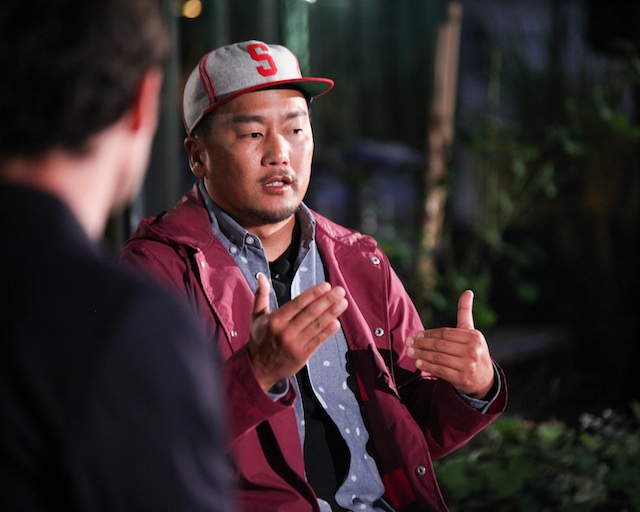 Chefs Roy Choi and Daniel Patterson's plan to open a healthy fast food chain has grown from just a seed of an idea to a straight-up food revolution. Over a discussion panel at the Line hotel in Koreatown on Wednesday night, Choi and Patterson went into what we can expect from their soon-to-be-opened Loco'l restaurants and what prompted them to become impassioned about changing the status quo.

They spoke by the hotel pool outside of Choi's latest venture, the beautiful greenhouse-like Commissary restaurant. WSJ. Magazine's Howie Kahn, who recently penned an in-depth piece on Loco'l, led the discussion about the duo's project. Choi said they hope to open up the Watts location in five months. They plan on starting construction in Watts in a couple of months, and a couple of months after that in the Tenderloin in San Francisco. Choi and Patterson had launched a Indiegogo crowdfunding campaign to fund Loco'l, and just last month, they raised $128,000, an amount well over their goal.

As for Loco'l's menu, it'll be something that will keep on changing. Patterson said they'll keep trying out new menu items, see what people enjoy and go off of that. "To have a fast food concept [where you're] constantly changing things, that's a whole new ideology," Choi said.

They've got nicknames for different categories in their menu, which run from $0.99 to $6. They'll have Foldies, a quesadilla-and-taco hybrid; $4 Burgs (short for burgers); $2 chicken tenders; and $6 rice bowls. (Kahn reported that the Burgs patties will be made partly of meat and partly whole grains with quinoa and barley mixed in.) And then there will be the $0.99 Yotchays, which Choi said means vegetable in Korean. Those will be individual items from corn chips to cooked-down greens. Guests will be able to buy as many Yotchays as they want and pile those into a bowl if they so choose to.

Loco'l won't have soda, but rather agua frescas and coffee. Patterson said they first thought about making their own sodas, but decided there would just be too much sugar in the drinks. "We’re just not going to do soda," he said. "[We thought], 'What are they gonna do? Not come in just because we don’t have soda?'"

Choi added that Patterson, who's a two-Michelin-star chef in the Bay Area, is the head chef for Loco'l's food and Choi is his sous chef. But in the branding and marketing end, Choi takes the lead. 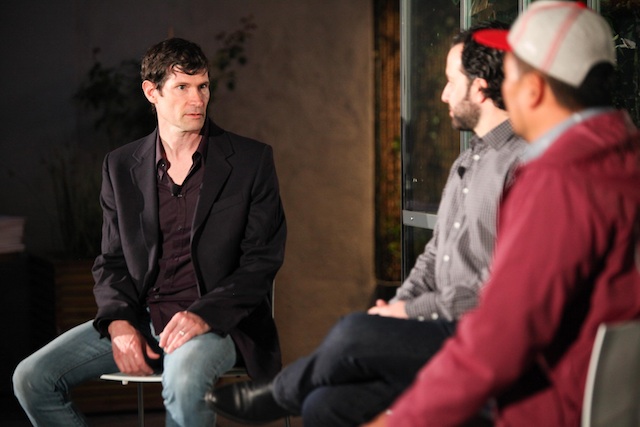 They teamed up after Choi gave an impassioned MAD Symposium speech at Copenhagen, Denmark in the summer of 2013. He talked about how chefs needed to make a difference and bring affordable and healthy food to communities that need it most, like South L.A.

At the Line, Choi went into how unhealthy fast food is, and that our children have been manipulated and brainwashed into believing this is the way to live. "It’s killed, poisoned our communities for the last two generations," Choi said. "That shit is real. To me, that’s fast food. But that doesn’t mean that that has to continue to exist."

Patterson runs the Cooking Project in the low-income neighborhood of the Tenderloin. It's a charity group that teaches kids how to cook. When the children told him there weren't any restaurants around them to get healthy options, that's when the seed of Loco'l was planted in his head. He was also at that same MAAD Symposium, was inspired by Choi, and called him two months later. The rest is history.

Related:
Video: Roy Choi Wants The Next Food Revolution To Start In Watts