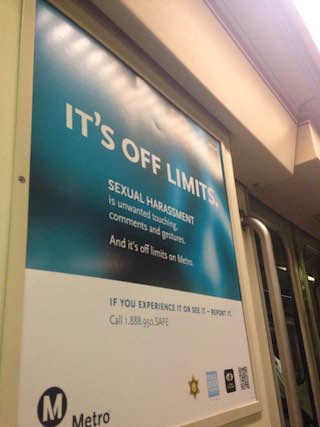 Riders are encouraged to report harassment they experience or witness (Photo by Juliet Bennett Rylah/LAist)
In an effort to curb the rampant sexual harassment riders report receiving while taking the bus and train in Los Angeles, Metro is launching a new campaign called "It's Off Limits."

A recent survey of 22,604 Metro riders found that 1 in 5 Metro users have been victims of sexual harassment. This can include indecent exposure or unwanted comments or touching. However, only 99 of these riders reported the harassment, resulting in 20 arrests.

The "It's Off Limits" campaign will encourage anyone who is either subject to or who witnesses harassment to report it via an app or by calling a hotline, according to City News Service. There will also be signs on buses and trains, as well as information displayed on video monitors. Metro board members will officially launch the campaign tomorrow at an 11 a.m. press conference at Union Station, however, the ads are actually already up. I saw one and took a photo of it over the weekend.

The Sheriff's hotline number is 888-950-7233, and the app—available for iOS and Android—can be downloaded here.