12 Under-The-Radar Artists Worth Seeing At Coachella 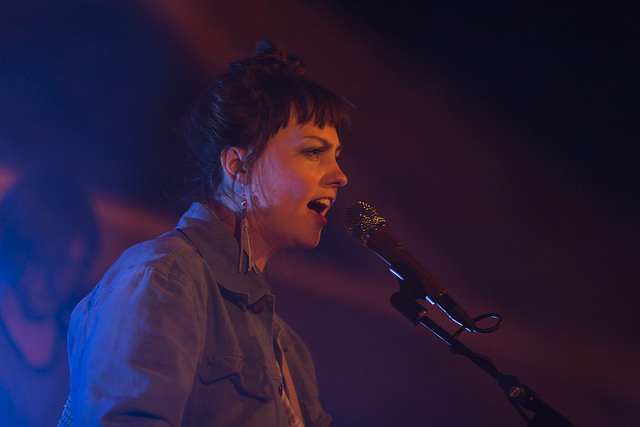 Coachella is happening this weekend, and sure, everyone who's going is jazzed to see Drake spill his sad-boy rhymes and Tame Impala burn brains with their psych-rock opuses. But now that set times have been announced, it’s time to plan your schedule, and there’s a wide variety of lesser-known artists to expose yourself to between seeing various DJs and headlining acts. Here are 12 of those artists who are worth seeing.

Ab-Soul: Though he runs in the same crew as Kendrick Lamar and ScHoolboy Q (both of whom appear on 2014’s excellent These Days… album), Ab-Soul’s remained somewhat underground by comparison. His lyrics range from dreamy, weed-stoked musings to more standard hip-hop fare, but when combined with the expansive production (courtesy of Digi+Phonics, Purity Ring and others), it adds up to a more experimental, psychedelic experience than you might expect.

Allah-Las: These L.A. lads churn out surf-rock nuggets with such seemingly effortless cool that it’s almost easy to overlook how detailed and well-made their songs are. Last year’s Worship the Sun pops with sandblasted riffs and warm, Dylanesque vocals, like some great lost garage-rock record unearthed at a Joshua Tree garage sale. For once at Coachella, desert boots are appropriate.

The Ghost of a Saber Tooth Tiger: The most elaborately titled artist amid a crowded field of ridiculous band names at Coachella (e.g. Night Terrors of 1927, The Gaslamp Killer Experience), TGOASTT produce warm, kaleidoscopic psych-pop about Xanadu and animals escaping the zoo, making Tame Impala seem down-to-earth by comparison. They can be excused for sounding Beatlesesque—the duo is made up of real-life couple Charlotte Kemp Muhl and Sean Lennon, son of John Lennon.

Eagulls: British band Eagulls play a very loud mixture of post-punk, hardcore and shoegaze at a metal-worthy volume, while George Mitchell’s highwire vocals knife through the mix with precision. It’s fitting they’re playing with fellow Coachella band Ride at the Roxy in L.A. right before the festival. Catch both earsplitting guitar bands if you can.

Jon Hopkins: Electronica producer Jon Hopkins is known for his work with Brian Eno and Coldplay, but his solo compositions offer their own scenic beauty to behold. His airy soundscapes and subtle beatwork should offer a nice breather when you’re coming down out of the EDM tents.

Benjamin Booker: Benjamin Booker’s soulful rock ‘n’ roll gallops by so quickly and furiously that he makes the Black Keys and Jack White seem like dad-rock by comparison. Booker’s band tears it up, but his sandpapery, shivering drawl is worth hearing alone.

Parquet Courts: Parquet Courts split the difference between stoner jams (no really, one of their best songs is called “Stoned & Starving”) and collegiate post-punk, taking the template set by CBGB-era bands like Television and Talking Heads and stretching them into intricate, extended tunes set to Andrew Savage’s verbose yelp. They’re best experienced live, when their songs take on a greater form, and, well, stoned.

Perfume Genius: Mike Hadreas’ queer swagger should offer respite from the cock-rock of bands like AC/DC performing at Coachella. On “Queen,” Hadreas sings, “No family is safe/When I sashay,” over slowly pulsating electro-pop. Hadreas’ voice alone can be quite powerful, too, peeling back the electronics to belt emotionally on tracks like “Fool” and piano ballad “No Good.”

MØ: Danish electro-pop artist MØ has a cooler vowel in her name than Björk, and her music imagines what that artist may have looked like as a millennial, moving lovely, bummed-out ballads of the Lykke Li variety to more complex beatwork and commanding pop vocals. She’s worked with Diplo and has covered the Spice Girls, turning the immortal “Say You’ll Be There” into a haunting stalker jam.

Angel Olsen: Though she’s plenty touted by the likes of Pitchfork, Angel Olsen hasn’t quite risen to the level of success of some of her contemporaries. That should change as more and more people hear her riveting 2014 album, Burn Your Fire For No Witness, and see her live. Olsen’s stunning voice falls somewhere between Emmylou Harris and Cat Power’s Chan Marshall, singing downtrodden breakup odes and biting garage-rock numbers with equal intensity.

John Talabot: Barcelona DJ/producer John Talabot stands out from the house DJ pack with his chilled-out beats and cloudy synthwork. Talabot hits the stage right about when the sun is at its hottest Sunday; his moody beats should cool you down on the inside even if you’re frying on the outside.