The Story Behind Joni Mitchell's Mysterious (And Possibly Fictional) Condition 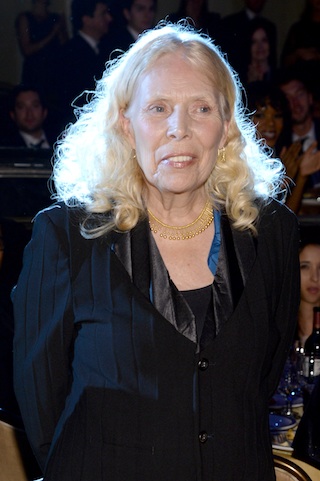 Joni Mitchell (Photo by Larry Busacca/Getty Images for NARAS)
It's still not clear what caused Joni Mitchell to faint in her Bel Air home earlier this week, sending her to the hospital. But the legendary 71-year-old singer has said in the past that she suffers from a rare and mysterious condition called Morgellons, something that has been a subject of debate on whether it's a real illness or not.

Scientists and the Centers for Disease Control and Prevention (CDC) are skeptical that Morgellons is an actual medical condition and believe it's more of a psychological problem. The people who believe it's a real illness say that it has some scary symptoms, including fibers (or even "specks, dots, granules, or worms") coming out of the skin causing tingling sensations that sometimes leads to lesions and scars, fatigue and problems with short-term memory, according to the New York Times.

In a 2010 interview with the L.A. Times, Mitchell said she has this "weird, incurable disease that seems like it's from outer space." She added, "Fibers in a variety of colors protrude out of my skin like mushrooms after a rainstorm: they cannot be forensically identified as animal, vegetable or mineral. Morgellons is a slow, unpredictable killer — a terrorist disease: it will blow up one of your organs, leaving you in bed for a year."

Mitchell has been so badly affected by Morgellons that it's caused her to have to put aside most of her singing career, according to Billboard.

"I haven’t been doing much lately because I’ve just come through about seven years of a flattening kind of illness," Mitchell said in a 2013 interview with The Star. "I’m not cured but I’ve found a helpful physician way outside the box. Western medicine says this doesn’t even exist, it’s a psychotic disease. It’s not."

As of yesterday, Mitchell was still in the hospital and undergoing tests, but is "doing fine," her spokesperson told the L.A. Times.

The Daily Beast reported that only 1,400 people in the U.S. have this condition, and that doctors and researchers are baffled as to what causes it. The CDC published a study in 2012 on Morgellons where they studied 115 people afflicted with it. They said that they weren't able to find any parasites or bacteria leading to the skin problems, and that they mostly found fibers, most likely cotton, on the skin of the patients. "No common underlying medical condition or infectious source was identified, similar to more commonly recognized conditions such as delusional infestation," the study said. However they did decide that it "significantly reduced health-related quality of life" for these patients.