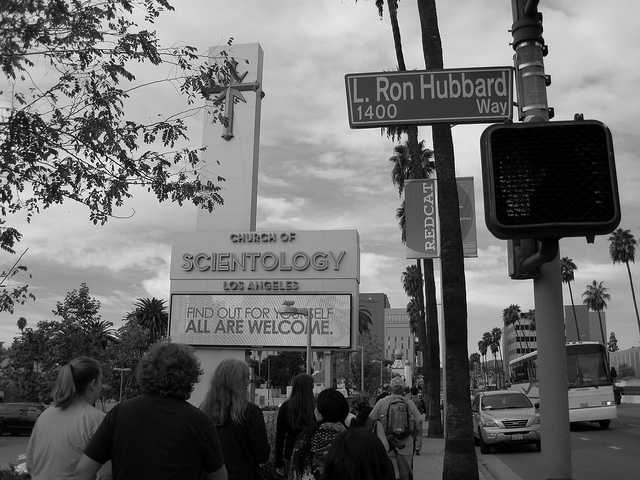 There are streets in Los Angeles that bear the names of all sorts of people like Polish national heroes, local socialist developers, the guy who brought water to Los Angeles, Cesar Chavez, a lesser-known labor leader, a banker and developer and more developers. The most baffling might be the stretch of Berendo renamed for Scientology's founder L. Ron Hubbard. This might be especially puzzling if you just watched the documentary on the religion that aired on HBO last night that paints a less-than-flattering portrait of the founder.

The Los Angeles Times dug into the archives to figure out what was going on when the city agreed to rename that short stretch next to the Scientology building in Hollywood. It happened in 1996, and while there was dissent, it sounds like it was pretty muted.

The Council President at the time John Ferraro, represented the area and managed to convince seven others to vote in favor of the proposal. One councilman Richard Alatorre defended the church: "The fact of the matter is, this is the leader of this church that has been a long-standing member of the community. They are involved in positive work—they have a lot of members."

Some of the council members trumpeted the church's anti-drug and anti-graffiti work, and a reverend from South Los Angeles showed up to talk up the Church's literacy programs in the inner city. Councilman Richard Alarcon, who last year was convicted of fraud and perjury, offered up this tepid defense: "We have, literally, thousands and thousands of streets named for people, most of whom I have no idea who they are."

Neighbors mostly didn't seem to mind the change (though we're assuming quite a few of them were church members): the Times reported that 183 neighborhood residents wrote to City Hall in favor, while only nine complained. The ones who weren't happy and spoke up at the meeting were described as "a handful of residents." They complained Hubbard was homophobic, and they called him a "crackpot" and a "charlatan."

It's worth noting that much of what is detailed in the damning Going Clear isn't exactly new. The Los Angeles Times published an in-depth series on the church in 1990, cataloguing the "slave labor" that powered the church and the criminal measures it took against critics and the government. There was even a section on how the church tries to court local politicians. It looks like the Los Angeles City Council wasn't a hard sell.

Scientology's in-house publication Freedom Magazine published an article on the street's official name change ceremony with the headline: "A New Street Makes Its Debut In The Land Of Legends." Kirstie Alley and John Travolta showed up to celebrate.

A representative from then-mayor Richard Riodan reportedly said, "The work on this street and its beauty have been inspired by the Church’s founder, author and humanitarian L. Ron Hubbard. His humanitarian works are contributing greatly to helping eradicate illiteracy, drug abuse and criminality in the city of Los Angeles."