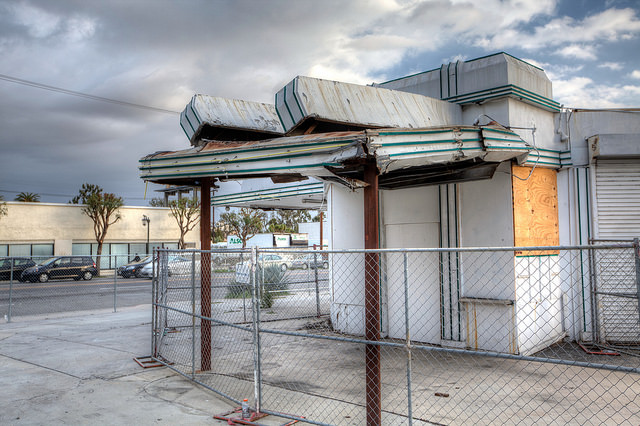 The Gilmore Gas Station at Hollywood & Willoughby, before Starbucks' renovation (Photo by mike-hume via the LAist Featured Photos pool on Flickr)

Starbucks seems to have learned a thing or two from their Sad Starbucks debacle.

Just as the ubiquitous coffee chain has fixed up the depressing stucco eyesore it opened a while back in Highland Park, Starbucks snapped up the 80-year-old Gilmore Gas Station at Highland Avenue and Willoughby and converted it into a snazzy drive-through location. Curbed points out the closed-down historic gas station was looking pretty dreary anyway, and Starbucks has restored the original wood and aluminum exterior of the place.

Love what @Starbucks has done with the rundown Gilmore Gas Station on Highland in Hollywood. pic.twitter.com/XwrlmZpGYH

The original art deco-style gas station appeared in the 1991 film L.A. Story, according to filming location blog I Am Not a Stalker. It was originally designed in 1935 by engineer RJ Kadow, one of the first and last of its kind, empty since the early ’90s but designated a Historic-Cultural Landmark since 1992, protecting it from demolition.

The new Starbucks should be open by mid-year and will include indoor seating and patio area. Maybe Starbucks ain’t so dumb after all.

If the name Gilmore Station rings a bell, that may be because the building at the site of the first Gilmore Station at 3rd and Fairfax still carries the same name, only now it houses a Trader Joe’s and other assorted shops. It was part of a larger area that once housed a dairy farm bought by farmer-turned-entrepreneur Arthur Fremont Gilmore in 1880, who struck oil in the early 1900s, opened the gas station chain and whose son oversaw the opening of the original Farmer’s Market on that land in 1934, where it remains today.