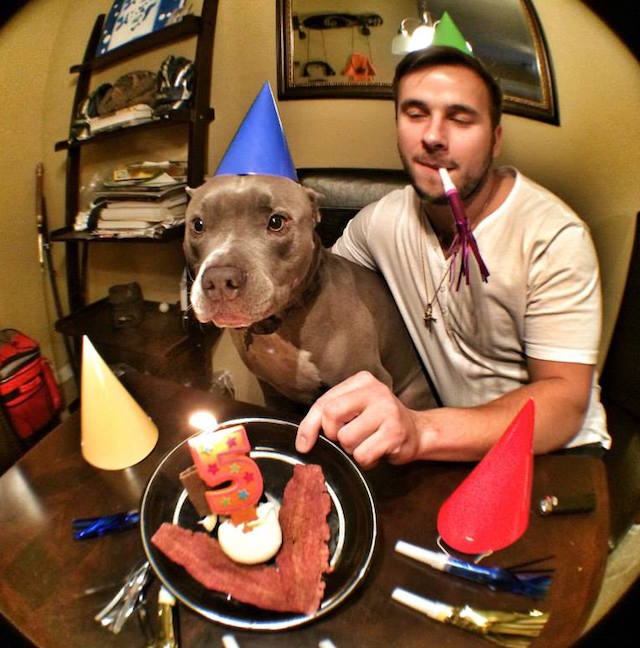 A San Diego man is livid after a police officer shot and killed his service dog of six years.

Ian Anderson, 24, said he was asleep when two police officers knocked on his door in the 900 block of Felspar Street in Pacific Beach at about 5 a.m. on Sunday, NBC San Diego reports. The officers were on a domestic disturbance call in the neighborhood, and Anderson believes they must have come to the wrong address.

The knocking also woke up 6-year-old Burberry, a pit bull and service dog to Anderson. Burberry barked at the noise and followed Anderson when he went to open the door.

"Instead of greeting the dog like anyone else would have, he jumps back, then shoots him," Anderson told Huffington Post.

Anderson's friend took video of the aftermath, during which Anderson can be seen sobbing over Burberry's body, lying in a pool of blood. The officer that pet the dog is identified in the video as Officer Jackson, and appears upset. The other, identified as Officer Bennett, refuses to give a reason as to why he felt the need to kill the animal. When asked why they were even there in the first place, Jackson says they'll need to wait for his supervisor.

Warning: this video is graphic and may upset some viewers.

Burberry was a registered service dog who Anderson got for anxiety and depression when his father died while Anderson was still in high school. And Burberry didn't just help Anderson: he also gave cheer to children with Down syndrome and autism. 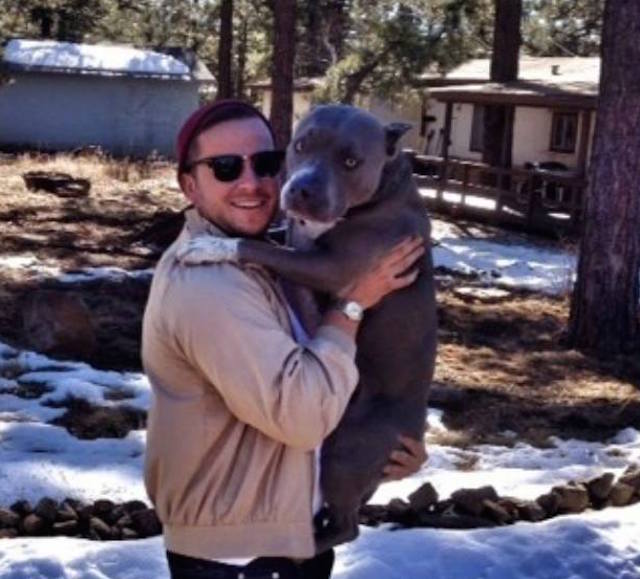 Anderson says his world has been destroyed by Burberry's death and he's also confused as to why the officer would fire a gun so close to his own partner, as well as to Anderson himself. "I wish I could have taken the bullet instead of him," he told HuffPo. "It could have been any of us, this cop was so trigger-happy. It could have been me that was shot."

An official with the SDPD told NBC that the shooting is under investigation. There were also no arrests or charges made in the domestic disturbance call that started the chain of events.

As those of you who knew Burberry already know, Burberry was the absolute best dog in the entire world and has never nor would ever hurt anyone or anything. It is absolutely asinine that the Officer is able to justify killing my dog. Not only was there no reason for the Officer’s to be at my house because they came to the wrong address, but there was absolutely no reason why the Officer should have felt threatened enough to use a lethal weapon to shoot my best friend and put myself and those around me in jeopardy. I know nothing will bring Burberry back, but it only seems necessary that this Officer is reprimanded for his disorderly actions, before this trigger happy Officer takes more lives. I am thankful for the lives that Burberry touched over the last 6 years—he never failed to put a smile people's faces. Now you can protect dad up in heaven for me. I love you past the stars Burberry, you'll always be my angel!

Anderson has set up a Facebook page for Burberry called 'Justice for Burberry' and an online petition that would require San Diego police officers to take a class in animal behavior.