Restored Rocky And Bullwinkle Statue Returns To The Sunset Strip 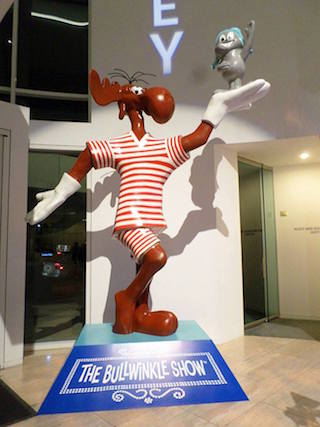 Holy Smoke! (Photo via ASIFA Hollywood)
Rocky J. Squirrel and Bullwinkle J. Moose will soon be coming home to the Sunset Strip after a three-year absence.

West Hollywood's Rocky and Bullwinkle statue first popped up in 1961 in front of Jay Ward Productions, the production company behind The Rocky and Bullwinkle Show—and Cap'n Crunch! Bullwinkle, holding Rocky on an outstretched palm, was posed to parody a billboard for the Sahara Hotel erected across the street that featured a showgirl, Curbed LA reports. Ward's family has now offered to donate the statue to West Hollywood, and the WeHo City Council voted to accept the gift last night.

While Jay Ward Productions stopped making new cartoons in the '70s and eventually closed in 2002, the statue remained until 2012 when DreamWorks Animation—who had bought the rights to the cartoon—worked with Ward's daughter to restore it. The updated statue was then moved into the Paley Center in 2014 as part of the Jay Ward Legacy Exhibit.

The statue's new home will be near a parking lot at 8775 Sunset Boulevard. WeHo City Council will have to appropriate $25,000 for installation, however, Gibson Guitar Foundation is putting up $20,000, WeHoVille reports.

Andrew Campbell, WeHo's Cultural Affairs Administrator, told LAist that WeHo is excited to have the statue back and offer it a permanent home. While WeHo is still working on the installation plan, Campbell says the statue may be unveiled in mid- to late July.