The Challenges Of Making A Scientology Documentary, According To 'Going Clear' Director 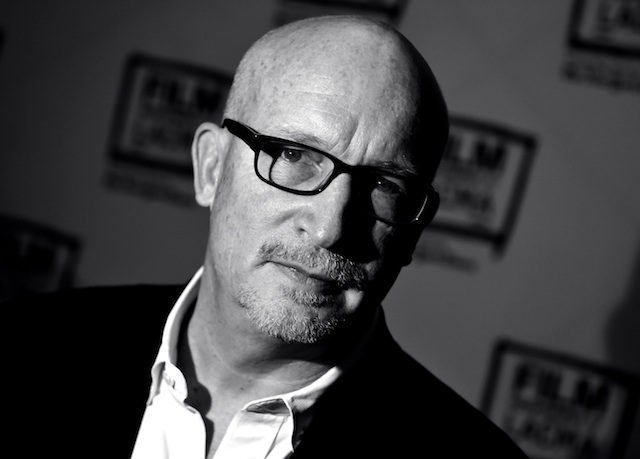 Alex Gibney's documentaries have tackled all sorts of controversial topics from WikiLeaks to Enron to the sexual abuse in the Catholic church. In his latest exposé, he paints a dark picture of the abuses inside the powerful Church of Scientology through interviews with high-ranking defectors and footage from inside the church's religious meetings.

Gibney spoke to LAist earlier this week over breakfast at the Four Seasons in Beverly Hills. The 61-year-old bespectacled director of HBO's Going Clear: Scientology and the Prison of Belief discussed the blowback he and the people in his film have received since he began work on the documentary, the hurdles of creating a documentary on a notoriously litigious group and the moral responsibilities he thinks stars like Tom Cruise and John Travolta have in standing up against the religion.

Going Clear is based on Lawrence Wright's bestselling 2013 nonfiction book with the same name. It tells the story of how Scientology's creator and prolific science-fiction novelist L. Ron Hubbard led the religion to where it is today, and gives us a glimpse into his own psyche. It features video clips of church leader David Miscavige and Cruise, Scientology's celebrity spokesperson, giving fervent speeches to large audiences of religious followers who break out in uproarious applause—scenes that the documentary compares to Nazi propaganda films. Going Clear's most damning stories of emotional and physical abuse come from interviews with ex-church members like former senior executive Mark "Marty" Rathbun, former spokesman Michael Rinder, 36-year-long devout member Sara Goldberg, Crash screenwriter Paul Haggis, and NBC's Chicago P.D. star Jason Beghe. Sylvia "Spanky" Taylor, a Scientology Celebrity Centre worker and handler for Travolta, details her and her baby's harrowing escape from the church.

It was a big feat for Gibney to make this film over the last two years, and he was careful about how he approached it, knowing that it could open him and his subjects up to harassment and lawsuits from Scientology members. HBO lawyered up as well. The network's Documentary Films president Sheila Nevins told The Hollywood Reporter in November that they probably had 160 lawyers looking at the film.

Early on, Gibney kept a low profile with his project and would use burner phones to contact his interviewees. He also planned secret rendezvous with ex-Scientology members. "Sometimes for the on-camera interviews we’d set up gear in somebody’s house and I’d make sure I’d be there hours before," he said. "Then the person would show up there so it was like they were just going to somebody’s house."

Even acquiring news clips from the media for this film proved to be difficult. While Gibney previously hadn't had any trouble getting news agencies to license him material, it was different with this subject. However, he was able to use the clips under the "fair use" doctrine that grants permission to use copyrighted material without getting permission from its holders as long as it's used in situations like criticism or commentary.

"I found it interesting that universally this subject—more than any other—provoked all the networks to decline to license," Gibney said. "I think at the end of the day, that tells you more about Scientology than it does about the networks, which is how ruthless they’ve been in trying to silence any criticism."

Gibney knew going in that he would face some blowback making this documentary, but this was nothing new to him. When he filmed We Steal Secrets: The Story of WikiLeaks, a movie that Julian Assange loathed, Gibney said Assange employed the same kind of character assassination tactics on the internet as Scientologists have. When you search for Gibney's name in Google, the first thing that pops up is a link to Freedommag.org, which leads to a series of "mini-documentaries vilifying everyone in the film," Gibney said. On the website's landing page, the first video is titled, "Alex Gibney Documentary 'Going Clear' Propaganda." Others have titles like "Marty Rathbun: A Violent Psychopath," "Mike Rinder: The Wife Beater," and "Sara Goldberg: The Home Wrecker."

Gibney also received lots of cards and letters from individuals and attorneys threatening "all sorts of things," he said; so far, nothing's happened to him personally. It's the people in his film who have apparently faced the most vicious threats.

In Going Clear, there's footage of Scientology members with GoPro cameras showing up outside Rathbun's home, harassing him, and taking surveillance video of his wife Monique. However, in the Freedommag.org video, it just shows Rathbun exploding in anger, screaming and pushing the men outside his home.

"Private eyes hired by the church are following them, trying to intimidate them," Gibney said. "In some cases, just trying to get inside their heads. It’s really the focus of a lot of what the church does now—is try to destabilize you."

Some of the hurdles Gibney faced in making this film was getting people to talk because they were afraid it would open themselves up to further abuse, which he said has sadly happened. He said that many who recently defected were scared to talk on camera because those who leave the church have to sign non-disclosure agreements, and sometimes others would suddenly receive large bills for auditing—Scientology's form of counseling. While members get auditing for free in the religion's Sea Organization—a wing of the church—when a dissenter leaves for reasons that the church doesn't endorse, Gibney said they're slapped with a bill that can go up to $200,000 for the back-auditing time. And that's something they don't want to deal with.

Most of the people interviewed in the documentary left the church years ago, but others who recently defected weren't ready to talk on camera yet, save for Goldberg. She publicly spoke out against Scientology last May, saying that the church tried to make her "disconnect" from her son, a practice that allegedly forces people to break contact with people who are critical of the religion. The church denies that any such policy exists.

In Going Clear, Gibney doesn't exactly go into what brought these people into Scientology in the first place, which we would've like to see. But in our interview, he talked about how auditing originally played a role in helping these people feel a sense of release, peace and comfort before it ended up trapping them. "The whole movie’s really about speaking out and how important that can be, especially from a therapeutic standpoint because I think it was valuable for people to do this auditing," Gibney said. "But they were caught inside the prison of belief. They were taken advantage of, partly because their secret testimony were used against them. And then when they [left the church], they found another way of curing themselves, which was to speak out."

While Gibney's subjects include dissenters and journalists, he said he wasn't able to get interviews with the current leaders at the church. However, Church of Scientology's spokeswoman, Karin Pouw, sent LAist this statement, painting a different picture of what happened:

Despite repeated requests over three months, Mr. Gibney and HBO refused to provide the Church with any of the allegations in the film so it could respond. Had Mr. Gibney given us any of these allegations, he would have been told the facts. But Gibney refused to speak with any of the 25 Church representatives, former spouses and children of their sources who flew to New York to meet and provide him and HBO with firsthand knowledge regarding assertions made in Mr. Wright’s book as that was all we had to guess from. Gibney’s sources are the usual collection of obsessive, disgruntled former Church members kicked out as long as 30 years ago for malfeasance, who have a documented history of making up lies about the Church for money.

Gibney says he reached out to the church and a number of individuals to be interviewed, but they all declined. "The church—very late in the game—came up with a strategy of sending 25 unidentified people to New York to talk with me," he said. "But it seemed a rather cynical gesture. I wanted to talk to certain people about certain things in the film. They decided they wanted me to make a different kind of film and talk to a whole group of different people. Mostly, the purpose of me talking to those people—I now know from subsequent videos that have been put out—has been to vilify the subjects in the film."

He was more interested in speaking to people who were in positions for power, like Miscavige, Cruise, and Tommy Davis, the former head of the Scientology's Hollywood Celebrity Centre. 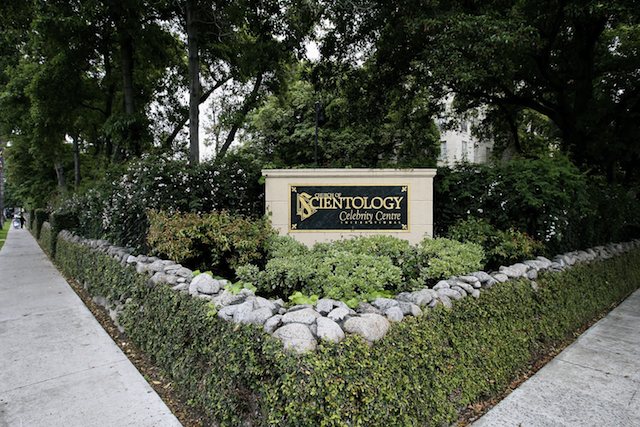 The exterior of the Church of Scientology Celebrity Centre International in Hollywood. (Photo by Getty Images/Getty Images)

As Gibney pointed out in his film, he thinks Cruise and Travolta have a moral responsibility to at least look into the allegations of Scientology's abuses and speak up about it since they are walking advertisements for the religion. He asserted that Cruise is very well aware that these issues exist as Cruise's attorney has received letters detailing the abuse and has the legal responsibility to pass the information on to him. In Going Clear, Taylor talked about how Travolta once got angry with her that she had let the church abuse her so badly, so Gibney believes Travolta is also aware of the alleged abuses. It's not clear what the real reason is behind Travolta's silence, but the film hints that the church has dirt on him from the audits, which we have all heard ourselves. Although Gibney said he's heard both Cruise and Travolta are nice guys, they're allowing these things to happen in their names, and people are joining Scientology because of them.

He said that Haggis decided to come out against the church after a woman approached him at a coffee shop in New York and told him how she was an actress and a fan of his work, and that she was thinking of joining Scientology because of him. A light bulb went off in his head at that moment and he felt he had to do something about it. In 2011, Wright would interview Haggis in a lengthy New Yorker article about his experiences with the church and decision to leave.

Gibney said that it's taken the people in his film a long time to come to terms with the terrible things they did as Scientologists, which included committing crimes and misdeeds at the behest of the church. A word that often comes up from the interviewees is "shame," something they feel after coming out from what Beghe calls the "Matrix of thought" that they get trapped in. Gibney originally thought his film would be mostly about abuse and abuses of power, but it became more about the psychological story of the prison of faith.

"I think for a long time people regarded Scientologists as alien beings and said, 'Oh, those are those crazy people,'" he said. "I think by following those characters that I did in the film, you see those people—they're smart people and they're tremendously empathetic. In a way, this is to say Scientologists are decent, caring human beings, but they, like we, can all be led to a very disturbing place if controlled by a kind of blind faith or manipulated by a leadership, whether it be a political movement or religion that has rather brutal aims."

'Going Clear' opens in Los Angeles, New York and San Francisco today. It premieres on HBO on March 29 at 8 pm.