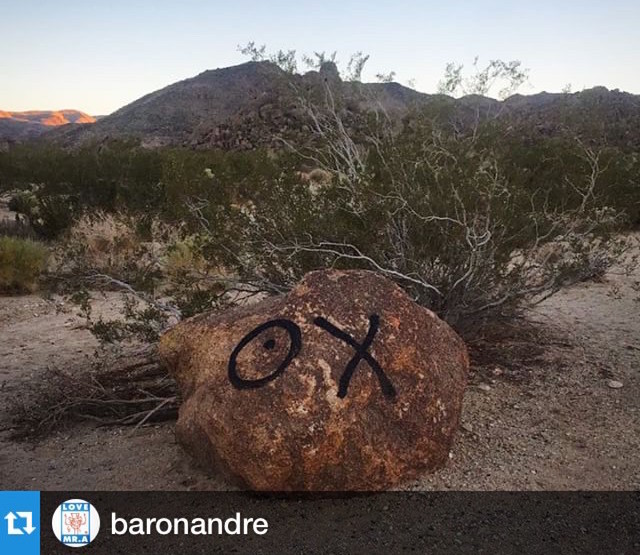 The boulder tagged by André in Joshua Tree National Park. The photo was originally uploaded to André Instagram account but later deleted. Modern Hiker now has it on theirs. (via Modern Hiker on Instagram)

Street art can be cool (your mileage may vary), but let's try to keep that in the streets and urban spaces?

André Saraiva, better known as just André, posted a photo to his Instagram account (now private) on Wednesday showing him having tagged a boulder with the 'eyes' of his trademark "Mr A" stick figure character. His photos revealed he was enjoying a trip in the park, and in the comments of the boulder photo, Modern Hiker (who originally broke the Casey Nocket story) took him to task. 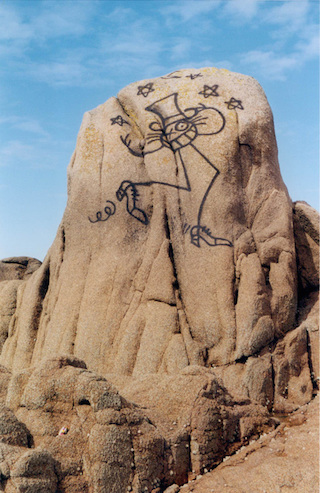 A rock tagged with André "Mr A" figure, from a photo taken in 2013. (via Andre Saraiva's personal website)
On Instagram, André replied, "This mr was made with love at friends privet back yard and not in your national park! [sic]" However, a thorough investigation by Modern Hiker and its readers revealed that the rock indeed was inside Joshua Tree, near the trailhead of the Contact Mine—confirmed by a reader in the area who took a photo and posted it on Facebook. André locked his Instagram account and deleted the photo shortly after being called out by Modern Hiker, but it has been saved for posterity on their own account.

Sadly, André is not the only person who has left their own mark on Joshua Tree. "We are a graffiti-heavy park, unfortunately," Jay Theuer told The Desert Sun in October. As the lead archeologist and cultural resource branch chief of Joshua Tree NP, he's spent time and resources scrubbing the park of graffiti. "Once damage is done, it can't always be reversed," he added. Modern Hiker contacted chief ranger Jeff Ohlfs of Joshua Tree, and he told the site that André was "in (their) sights."

André is a notable Paris-based street artist that was previously featured in the Banksy documentary Exit Through The Gift Shop. Although he usually tags urban spaces and walls, a photo on his website from 2013 shows that natural spaces aren't off limits to him.