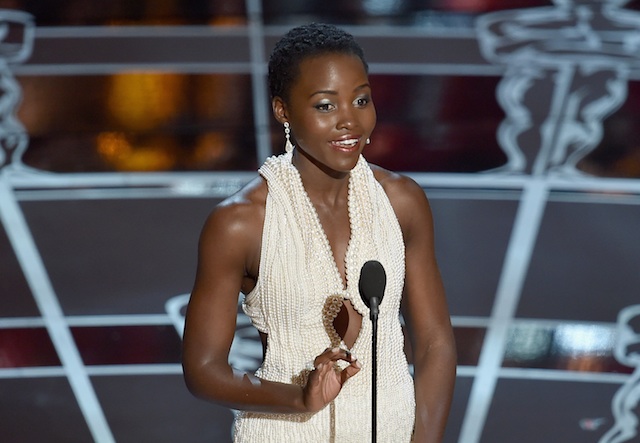 Lupita Nyong'o at the Oscars (Photo by Kevin Winter/Getty Images)

Lupita Nyong'o looked stunning in her Oscars dress—you know, the one that was covered in 6,000 actual white pearls. And someone apparently saw just how valuable a pearl-covered dress is and stole it right out of her hotel room in West Hollywood earlier this week.

The 12 Years a Slave actress told authorities her Calvin Klein gown was missing from her room at The London while she was out and about on Tuesday from 8 a.m. to 9 p.m., according to TMZ. The price tag of the dress is a hefty one: $150,000.

Nyong'o doesn't even own the dress—it was on loan from Calvin Klein, a source told the NY Daily News. As we all know, there's nothing more awkward and embarrassing than having to explain to someone how you lost something you borrowed from them.

A source also told the Daily News that Nyongo has a huge entourage who had access keys to her room.

L.A. County Sheriff's Dept. deputies are checking out surveillance footage from the hotel during the time Nyong'o left her room.

Update (2/28): The thief returned the dress... but it turns out the pearls were all fake.