One of the greatest parts of living in a city like Los Angeles isn't the weather, the beaches, or even the celeb sightings. It's about being in a city where you can literally travel through your tastebuds. We're home not only to a vast expanse of international communities but also the wide variety of culinary delights that comes with them. A perfect example of the great diversity our city has to offer is the simple sandwich. There are endless international iterations for these hand-held meals around town. One could even say that sammies are the language spoken round the world. Here are some of our favorites. 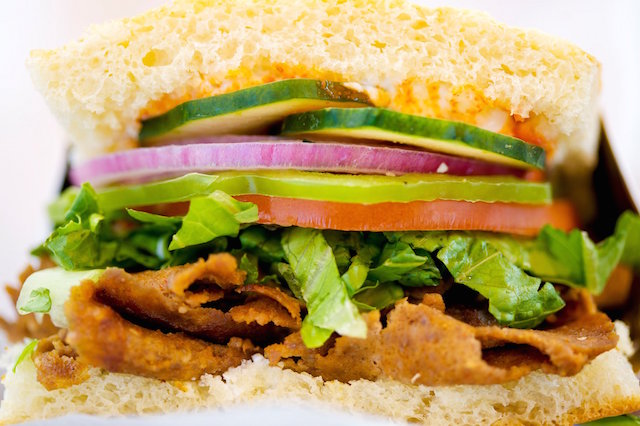 If you've spent any considerable time drinking throughout Europe, you'll know this Turkish sandwich as your go-to drunchies snack. The guys over at Spitz do a fantastic job of recreating the street food that they grew to love abroad, making theirs with super savory schwarma, garlic aioli, fried lavash chips, romaine, cabbage,
tomato, onion, green pepper, cucumber and tzatziki. You can choose either beef and lamb, chicken, or mixed meats. An added bonus is that their Little Tokyo location has an awesome happy hour, so you can wash it down with a local craft brew. 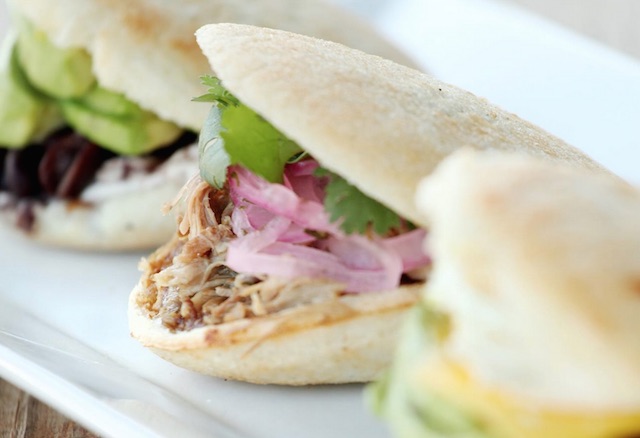 Though both Colombia and Venezuela both serve arepas—round flatbreads made of white corn flour—in Venezuela they are more often puffed up and sliced in half to be served as sandwiches. At Santa Monica's Cafe Bolivar, named after Simón Bolívar, you'll find Caracas-style arepas made to order. Their pulled pork version, pictured above, features tender shoulder cooked for 8 hours in Caribbean spices. Another favorite is the melted Gruyere and home-made chorizo arepa, with just the right amount of smokey paprika kick. Added bonus: arepas are wheat-free, gluten free and nut-free, meaning you can totally justify the minimum two per order the restaurant requires.

Middle Eastern food aficionados will be no stranger to the glory of laffa, which, when done right, is nothing to laugh at. This fresh, fluffy bread makes the perfect wrap for falafels and shawarma, and it's best when eaten fresh, which is exactly what you'll get at Joe's. They make their laffa to order, stuffing it with piping hot falafel made on the spot. Though the falafel could use a jolt of hot sauce, the ingredients are fresh and the bread even fresher. This Israeli sandwich is a meal in itself, and a steal at $7.25. 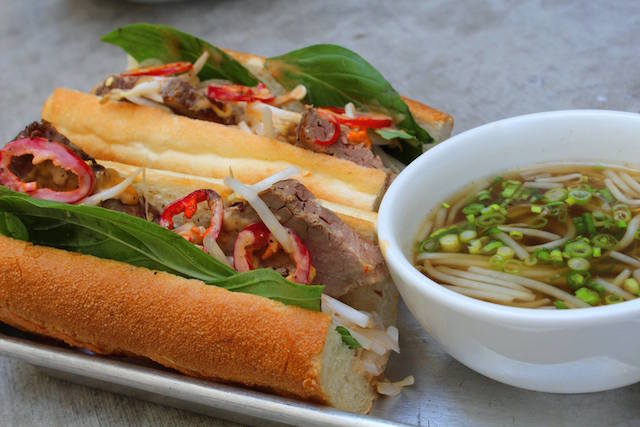 There are plenty of gourmet versions of this popular Vietnamese baguette—including great ones at East Borough, Gjelina Take Away, and Gingergrass—but if you're after something a bit closer to the prices that you'd find in Southeast Asia, you'll want to head out to Bánh Mì & Che Cali. It might be a chain, but it's way more consistent than Lee's, and with a much more appealing baguette. Plus they do two-for-one specials, meaning you can take one to go. Fair warning though: baguettes are always best when eaten the day of.

We were turned on to Super Torta DF by Bill Esparza, the city's de facto Mexican cuisine expert, and these behemoth sandwiches do not disappoint. This particular trailer parks in South Central Thursday thru Sunday, hawking several varieties of tortas, including the hulking torta cubano. This Jenga game of a sammie starts out with a thin milanesa that's stacked along with sliced pork leg, ham, hot dogs, yellow and white cheeses, vegetables, a smear of mayo and refried beans, sliced avocado, a chorizo omelet, chiles chipotles, and pickled jalapeños. That massive amount of stuffing sits inside a massive house-made telera roll. It's the ultimate Mexico City-style hangover cure. 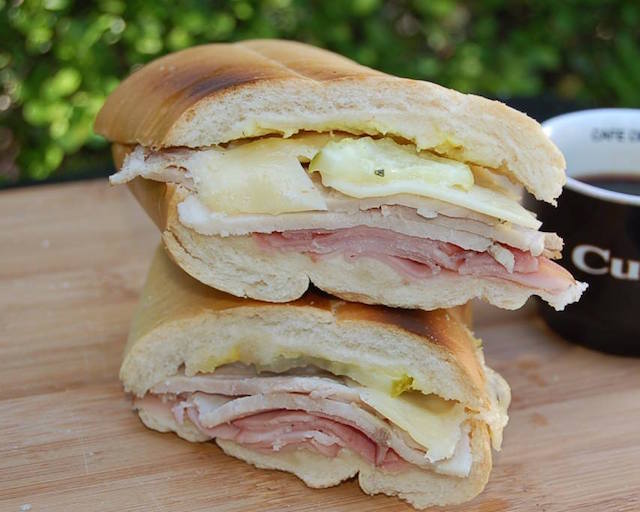 There are heaps of great Cuban restaurants in Los Angeles, but if you're after a classic Cuban sandwich like the medianoche, made with roast pork, ham, mustard, Swiss cheese, and dill pickles served on soft, sweet bread similar to challah, then our favorite spot to head to is old faithful Porto's.

Is there really anything more seductive sounding than a French ham-and-cheese sandwich covered in creamy béchamel with a fried egg on top? Put said sammie inside the gorgeous dining room at Republique, and it's game over, especially when made with James Beard-nominated pastry chef Margarita Manzke's bread. Also of note is another classic French sandwich on the lunch and brunch menu: the jambon beurre sandwich made with cornichons, thinly sliced ham, and Normandy butter on Manzke's perfect baguette.

While we anxiously await the roll out of Buddhabing's cart selling Beijing's best street sammy jian bing, we'll sate ourselves with the array of Pintung's Chinese rolls wrapped with pancakes instead of paper-thin crepes. There are plenty of great spots in the SGV for these scallion pancake-swaddled sandwiches to be sure, but what's awesome about Pingtung is that you get a wide variety of Asian street sammies in one spot, meaning you can take your tastebuds for an adventure without the jet lag. They offer beef, chicken, shrimp, and vegetarian rolls — the latter of which can be really hard to find at the markets in Beijing, as well as banh mi and pork belly bao sandwiches. 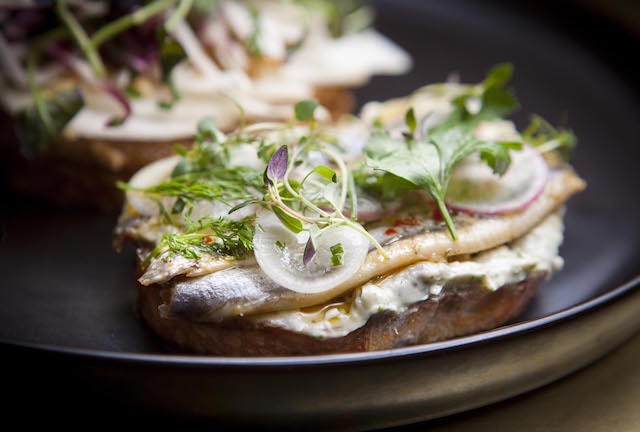 The Nordic food movement has really taken off, with one of its most ubiquitous dishes called smørrebrød—open-faced sandwiches typically made by topping hearty rye bread with butter and cured meats—showing up in countless restaurants and Instagram feeds. Though we love traditional Danish bakeries like Copenhagen Pastry and Hygge for pastries, the best tartine we've seen is the white anchovy at Cadet in Santa Monica. Kris Tominaga's take on smørrebrød is topped with delicate Spanish white anchovies known as bocarones marinated in olive oil, lemon juice, pickled garlic, and anchovy syrup atop a crusty piece of rustic bread along with radish, butter, and chives. It's perfectly balanced and has a wonderful punch of acidity, and will turn any skeptic into an anchovy-lover. 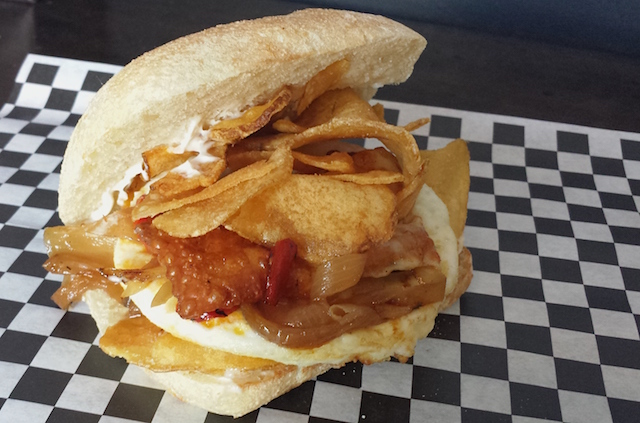 It's hard to find a great tortilla espanola here in L.A., but Michael Voltaggio has a fun take on the classic Spanish sandwich, using caramelized onion, chips, egg, manchego, mayo to make a great bite that riffs on that original. The chip/sweet onion/fried egg combo plays on the authentic Spanish omelette, which consists of potato, onion and egg baked into a torte shape. 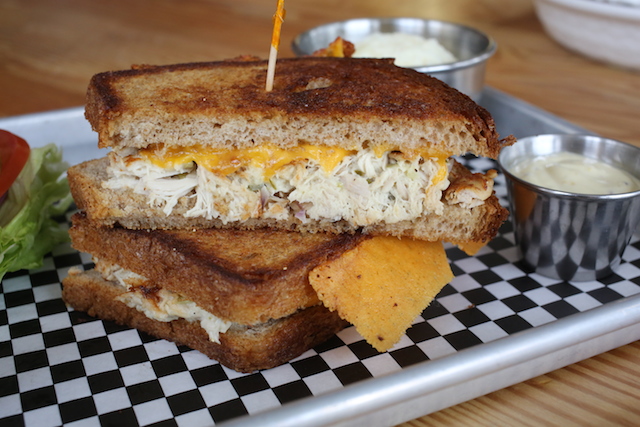 It's hard to pick one national sandwich for the good ol' US of A. Some might argue it's pastrami, but for me it's all about a tuna melt, a staple for diners and mothers across the country. And no one does it better than Cassell's in K-Town. It's made by poaching tuna slow and low instead of boiling it, rendering the fish super juicy and the fall-apart tender, unlike its tough canned cousin. There's just the right amount of mayo in the bare bones tuna salad, which is then sandwiched between generously buttered whole wheat slices and your choice of cheese, then grilled to perfection on the flattop.