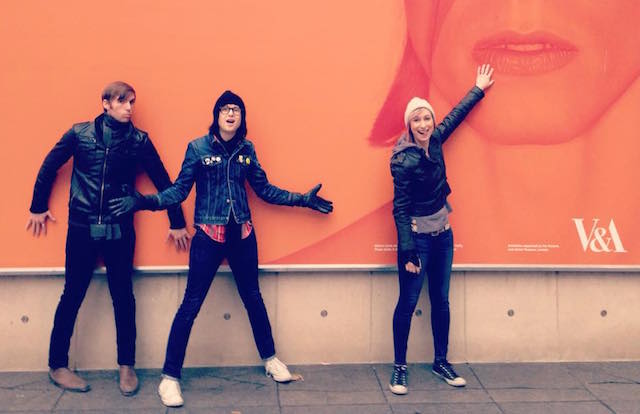 To be fair, Fredericks' band has been The Singles since 1999 (Photo via Facebook)

Los Angeles band The Singles is pretty upset that Scarlett Johannson and Este Haim just straight up and took their band name for their own pop group. They've shot off a cease and desist letter to the ladies letting them know it is not appreciated.

That may have delighted some, but a musician named Vincent Frederick was definitely not happy. Frederick, originally from Michigan, started a band also called The Singles in 1999. Since then, they've released plenty of music, played with Holly Golightly and The Weeks, and played about 100 shows in 2014 alone, according to a release from music publicity firm Pavement PR.

"I woke up one morning and learned from the news that our band name was literally just taken by someone else as their own," Frederick said in a statement. "It's hard to believe that any musician would do something like that to another band. Our band, The Singles, has an account on nearly all social media sites and our music is available in record shops, on iTunes, SoundCloud and other websites. Just a simple search on Google would have revealed that 'The Singles' was already a band name being used by another pop/rock band—our band."

How true is that? Well, The Singles do have their own website, a Facebook, a Twitter, a Myspace and a SoundCloud. The name also gets lost in the shuffle of countless compilation albums from bands like The Clash, The Pretenders and No Doubt all using 'the singles' as another term for 'greatest hits.' There's also a novel called The Singles about going to a wedding alone. In all fairness, it's a pretty bland name. It's not like we're talking about Cannibal Corpse here. Even though Frederick is right—his band has been established for quite some time—I'd go out on a limb and say I bet ScarJo's Singles have never heard of Frederick's Singles before. In fact, this recent bout of press is probably the best thing to happen to Frederick's group in a grip!

Wanting to be on the side of the little guy, I decided to check The Singles out. The first hit on YouTube is a video from five years ago for the pop-rock, Beatles-inspired track "Can You Go Out Tonight?" In it, Frederick repeatedly harasses a woman who is trying to get away from him for first half of the video, but then miraculously wins her over with the help of a giant penguin and a sweet guitar solo. She then comes to The Singles' show at a local Detroit-area venue and declares her love for them. The joke's on her, though, because despite stalking her all over town, the singer's got an Amazonian lady whose breasts are at his eye level already lined up.

But okay, okay. That was five years ago, before the idea of just leaving women alone in public was a trending topic up for debate.

Here's a newer video from the group. Maybe The Singles and The Singles can go on tour. They're both pretty catchy, and ScarJo is used to getting unwanted attention from dudes—namely John Travolta.