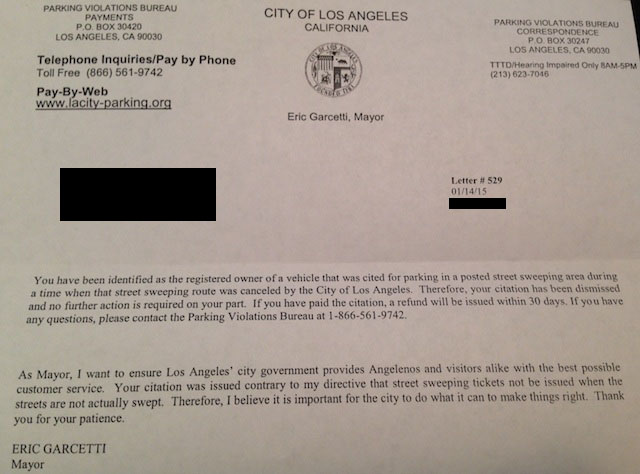 When Mayor Eric Garcetti discovered in November that parking officers were handing out bogus parking tickets in Los Angeles, he wasn't very happy about it. In fact, he said he was "pissed," and vowed that folks who were wronged would be refunded by the city. And hey, it looks like our mayor has kept to his promise. Kudos to him!

I recently received a letter in the mail last month from Garcetti's office, saying that I was cited for a parking ticket in an area that had relaxed parking zones, meaning roads where street cleaning has been cancelled and parking tickets aren't supposed to be handed out. It also said that the citation was dismissed, and that if I had paid it (which I had), then I would get a refund within 30 days.

And lo and behold, I received a check from the City of Los Angeles before the 30 days were up for the amount of $73. It's really happening, guys.

In the letter, Garcetti wrote: "As Mayor, I want to ensure Los Angeles' city government provides Angelenos and visitors alike with the best possible customer service. Your citation was issued contrary to my directive that street sweeping tickets not be issued when the streets are not actually swept. Therefore, I believe it is important for the city to do what it can to make things right."

Garcetti has been fighting the good fight to stop tickets being issued on relaxed parking zones. The city even launched a website in 2013 that shows routes where there's relaxed enforcement (meaning you can feel free to park on the street) on days where street sweeping has been cancelled.

Wrongly-issued parking citations had been handed out due to a communication problem between L.A. Department of Transportation (LADOT) and street cleaning services. LADOT says sometimes they aren't notified about street cleaning schedule changes until it's too late, and their parking officers go out handing tickets. However, after a CBS Los Angeles investigation that caught parking officers in the act, street services said they would work on better informing LADOT about their schedules.