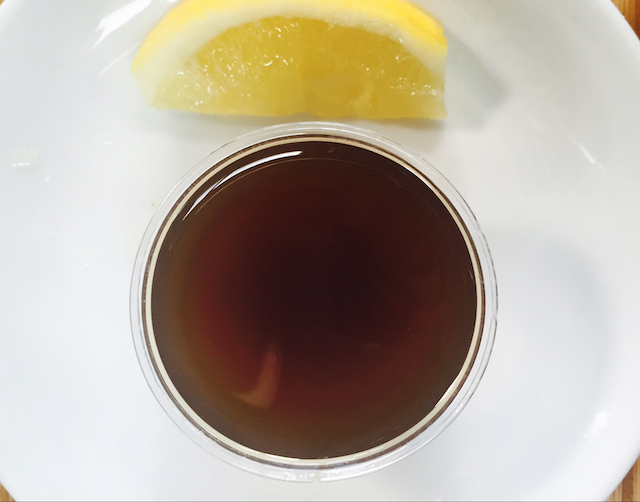 Photo of the Pure Black resin drink by Krista Simmons/LAist

Last week I ventured down to The Springs, that adorable new vegan restaurant/juice bar/yoga studio/co-working space in the Arts District everyone's raving about. The space is basically a 3D Pinterest board; if you're into the Ace Hotel properties, design, or clean eating in general, this is the perfect spot to perch for the afternoon to work. They've got some killer plant-based eats like the collard green-wrapped bahn mi, kombucha on tap, fantastic desserts, and apparently some really wacky elixir called PurBlack. 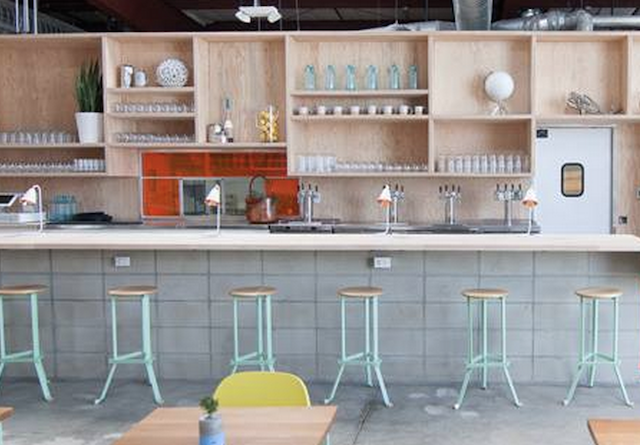 While sipping on my 'booch, I overheard the bartender talking up the drink to one of her customers, mentioning something about magma and minerals and ancient resin. It sounded totally ridiculous but also intriguing, so I flagged down the bartender for a full tutorial.

She went on to give me the 411 on a black resin called shilajit — which translates to "rock-invincible" — that is regarded by Ayurvedic healers in India for its restorative properties. It's also used in Greek culture, where it's known as mumijo or mumie. This resin pitch is made of humic substance, and it's very rich in fulvic acid, which is created by the decomposition of plant material. Translation: you're drinking really old, hardened compost. When the weather warms, the stuff oozes out of the ground — mainly in Himalayan mountains between India and Nepal — to be collected by its believers. At The Springs, they dilute PurBlack with water and sell it in a 1 oz shot form with a lemon wedge chaser for $4. 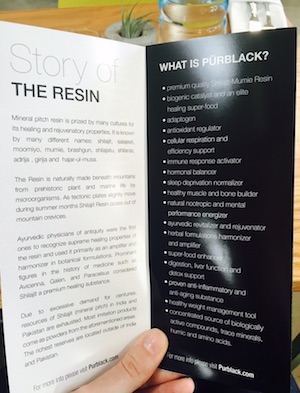 The PurBlack flyer boasts some of the drinks potential benefits (Photo by Krista Simmons/LAist)
PurBlack says that its high-grade resin combines the benefits of shilajit and mumie, and provides mental and physical benefits, including "improving brain function, cognition, emotional stability, and response to mental stressors," as well as serving as a "powerful, natural and safe adaptogen. Our Live Resin continuously repairs, builds, strengthens and protects a body at peak health."

Apparently there are lots of imposters out there, and I assume resin scraped out of an old hash pipe could be one of them based on the taste. It used to be a practical joke to make people guzzle bong water, and now we're paying a premium for it in the name of health?

I'm not saying it's total hocus pocus; this stuff has been used for centuries and there are even medical journals citing its efficacy. (Here's one from the International Journal of Alzhiemers talking about shilajit, and there are plenty of scientific journals cited on the PurBlack page.)

But it's admittedly a really bizarre-tasting drink, even when it's diluted and chased with citrus. What's more is that you're supposed to swirl the stuff in your mouth for as long as you can handle it because your gums are porous and are supposed to help you absorb the healing properties more effectively. And in order to really see the benefits, you're supposed to consume it multiple times daily.

Much as I love The Springs, I don't think my budget or palate could handle that. For now, I'll stick to the kombucha and cold brew.