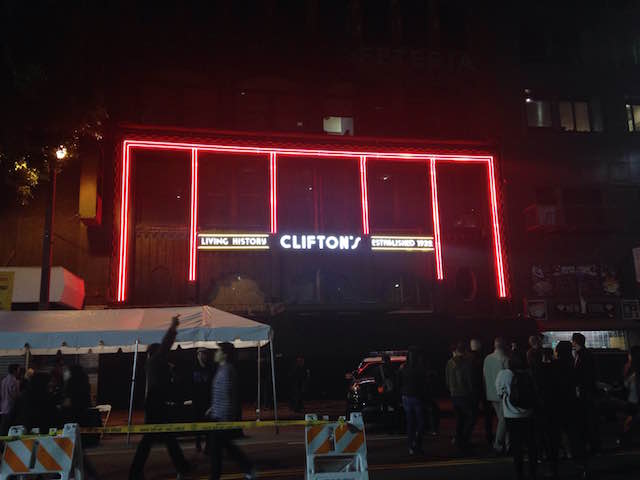 Clifton's was founded in 1931 by Clifford Clinton, hence the name. (Kind of like The Wiltern.) There used to be eight of these magnificent cafeterias, but now the only one that remains is the one at 648 S Broadway in downtown Los Angeles. Clifton's was purchased in 2010 by Andrew Meieran, owner of The Edison, and closed for renovation. Angelenos have been waiting a long time to once again visit the kitschy eatery, only to receive word that the grand reopening is being pushed back again.

Last week, however, a glimmer of hope appeared in a flicker of neon. We saw the sign ourselves on Saturday during the Night On Broadway event. We were part of a gaggle of pedestrians who stopped and paused to take a photo of the sign. The sign, in addition to the restaurant's name, reads 'Living History' and 'Established 1932.' This sign's design mirrors the neon sign that used to glow over the establishment's door. 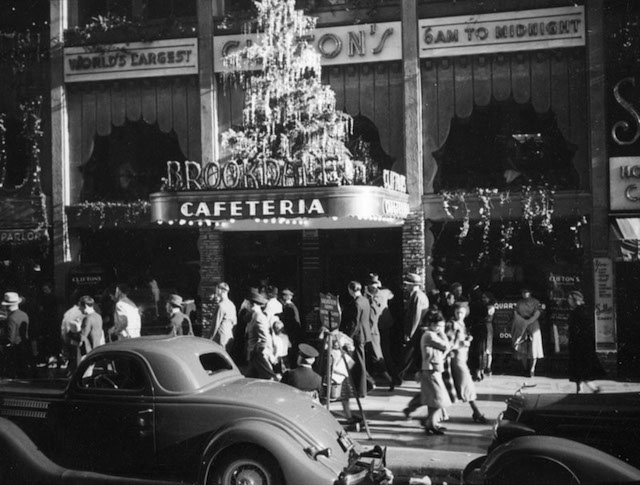 For many years, the original facade was covered by metal grates, which were were removed in 2012. Last week, DTLA Rising noted that workers could be seen installing the neon.

When Meieran bought Clifton's, he said he would be spending $5 million restoring the four-story restaurant, keeping much of Clifton's original look in tact. Other plans included reopening a bakery on the fourth floor and adding some new bars, as well as talk of the restaurant being open 24-hours and employing 100 people, some of them homeless folks who had gone through a training process. Being that Clifton's is huge (and old) and Meieran is allegedly a perfectionist, the four-year restoration does make some sense. We're happy to see a sign of life and eagerly await its return.