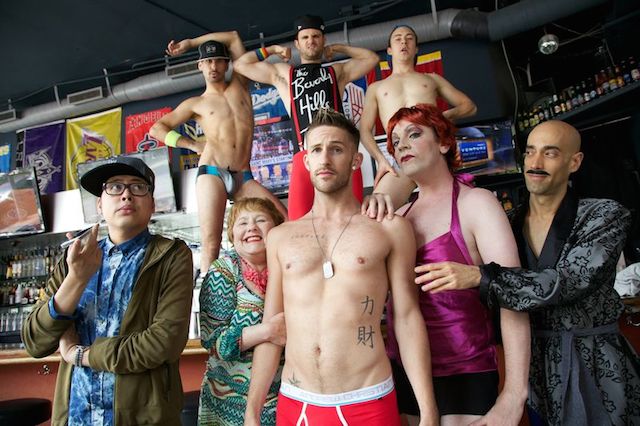 All the players (Photo courtesy of "Go-Go Boy Interrupted")

Drunken black-outs, waking up in a stranger’s bed after a night of go-go dancing, dreaded drag queen bosses and back-stabbing colleagues are all just part of the underground gay club scene depicted in a new series. It has all the makings of a soapy daytime drama, but it's actually a comic web series created by LA-based actor and comedian Jimmy Fowlie.

The Groundlings alum wanted to make a show based on his own experience working as a fresh transplant from the East Coast to Los Angeles and working as a go-go dancer at TigerHeat—renamed “Panther Warmth” in his series, Go-Go Boy Interrupted.

“It’s such a crazy world,” he recalls. “You have these entitled 18 year old boys and then you have these over-the-top drag queens. And Los Angeles, it’s such a youth-obsessed town and gay culture is extra-youth obsessed. So what happens to someone whose only goal is to be admired and get dollar bills thrown at them, when they age out of that profession? I ended up writing it as a show.”

In the series, Fowlie portrays Danny Carter, an alcoholic club dancer who gets fired from his job because he is turning 30. He’s replaced by the scheming Eliot, who isn’t even 21.

The gay community, Fowlie said, can be pretty vicious and judgmental. Danny Carter says at the top of the series: “We’re like women, except meaner to each other.”

While he’s moved beyond the alcohol-drenched go-go scene, Fowlie’s nostalgia for those wild days inspired the character Danny.

Go-Go Boy was a live show at the Groundlings up until January 5, featuring a series of wildly eccentric, roaringly funny sketches with the Go-Go Boy as the through-line. Now that’s over and Fowlie is trying to pitch it to networks and hoping it gets picked up. He’s toying with the idea of bringing the live show back, but for now, Danny Carter and his vivid, hilarious cohort of friends hang in limbo.

Fowlie's original vision was to follow the footsteps of Tina Fey, join the troupe of Saturday Night Live, then go on to make his own television series. He was one of the select few invited to audition for the famed NBC television show, but he wasn’t cast. Not to be deterred, he called in favors from his show biz friends, made the web series and released it on the internet anyway.

The response has been positive, and though he got good vibes and laughs from network decision makers, the show has been pigeonholed as “too gay,” he said.

Networks, he added, are risk-averse.

“At the end of the day, even if it’s not perfect, if it’s funny people will respond to it,” Fowlie said. “I think that’s the most important thing.”

In the meantime, you can catch Fowlie perform live at the Groundlings February 2 in the upcoming show, The Gale, or check out the pilot below: