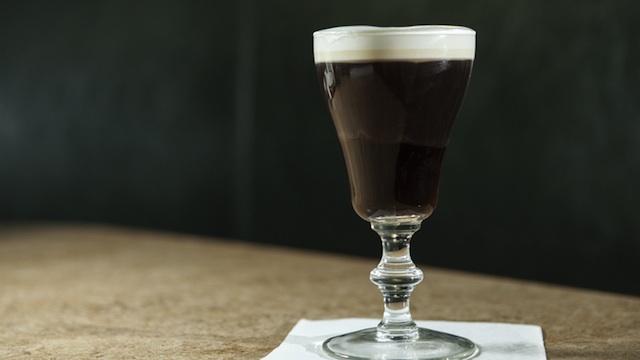 One of the most comforting things in life is sipping on a warm and creamy Irish coffee on a cold winter's night at a familiar old pub. It's been over 75 years since the Irish coffee was first invented in Ireland, and since then it's been imported over to the U.S. with bars all over the country still serving the drink. This includes our L.A. institution, Irish pub Tom Bergin's, which has been around since 1936 and is the second spot in the nation credited for serving the hot, whiskey-laced drink.

And in honor of National Irish Coffee Day today, LAist talked to Tom Bergin's owner Derek Schreck about the history of the Irish coffee and how the libation has changed over the years. Schreck also offers his Irish coffee recipe with some tips on how to make it right.

What are the origins of the Irish coffee drink?

Schreck: "A chef by the name of Joe Sheridan invented Irish coffee at the Shannon Airport in County Limerick, Ireland in 1938. It was in the old days of flying when float planes would land on the Foynes and passengers would be brought ashore in boats, shivering from the cold. So Sheridan decided to create a fortifying drink to warm them and calm their nerves. He filled the glass with hot coffee, stirred in a nice dose of Irish whiskey, and topped it with a floating inch of Irish cream."

What's the history of the drink being served at Tom Bergin's?

Schreck: "Shortly after Sheridan invented the cocktail, San Francisco columnist Stanton Delaplane brought the recipe from Shannon Airport in Ireland to Buena Vista Café in his native San Francisco. A few weeks later, he brought it over to Tom Bergin's, making us the second establishment in the U.S. where one could order an Irish coffee. It's been on the menu ever since."

How has the recipe changed over the years?

Schreck: "The Irish coffee recipe has changed a little, if at all, over the years. Due to its simple nature, the only variations are the types of whiskey, cream, and coffee used in the cocktail. Our recipe at Tom Bergin's is the original, right down to the use of Tullamore Dew Irish Whiskey. Tully is one of Ireland's more famous whiskies—outside the US market it is the most popular Irish whiskey in the world—and the whiskey originally called for in Irish coffee."

What's one of the most important things to do when making an Irish coffee?

Schreck: "It always baffles me how such a simple cocktail can so often be made poorly. Most places will simply take some whiskey, dump it in black coffee, and spray whipped cream on top. The most important thing to remember is that the Irish coffee is a cocktail, and must be treated as such. You'd never alter or omit steps in the making of an aviation or perfect Manhattan. Follow the recipe steps exactly using the proper ingredients and you'll end up with a delicious, warm, and comforting result."

What are some of the innovative seasonal variations on the drink?

Schreck: "Here at Tom Bergin's we like adding an occasional modern twist to our signature Irish coffee, capturing the flavors of the seasons such as pumpkin spice during the fall and gingerbread during the holiday months. Currently, we're featuring a gingerbread variation, which will be available on National Irish Coffee Day. All of our syrups are homemade from scratch and add a nice touch to the classic cocktail. And of course, the traditional version is always available."

Here is a recipe for Tom Bergin's Irish coffee, by Schreck:

Warm a toddy glass by filling it with hot water. Never build an Irish coffee in a cold glass. Once the glass is warm, dump out the water. Add your simple syrup and Tullamore Dew whiskey. Fill with dark roast coffee (Tom Bergin's uses a proprietary house blend—Tom Bergin's House Blend—from Picacho Coffee Roasters), leaving about a ¼" of room at the top. Whip the Irish cream until it is just thick enough to stick to an overturned finger. Gently float the cream on top.