13 Places To Eat & Drink While Watching The Super Bowl

Whether you're rooting for the Seahawks or Patriots this year (or just bitterly hate-watching), there are plenty of viewing parties throughout the city for the big game. We've got bars and restaurants with big screen TVs, drink and food specials, and of course, spots serving up wings. (We love wings.) We also have some hometown bars for the hardcore fans. Kickoff starts at 3:30 p.m. on Sunday Feb. 1. 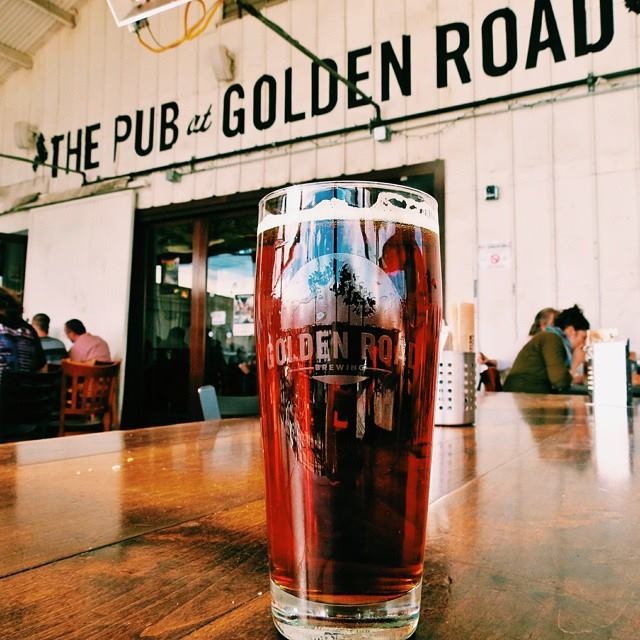 The pub at our local Atwater Village brewery, Golden Road, will be hosting a $30 all-you-can-drink special on Super Bowl Sunday. Plus, they're showing the game on full surround sound on all of their seven TVs, and will be throwing some raffles for prizes. And if you can take a breather from the game when it gets too stressful, you can play some cornhole or life-sized Jenga outside in their patio. They aren't taking reservations for this event, so it's first come, first serve.

Given their paltry sports history, it's no surprise that Seattle fans don't have many places to meet up in Los Angeles. But thanks to the work of diehard Seahawks fan Cedric James Morris, Backstage Bar and Grill in Culver City has been the SoCal spot for the 12th Man to meet up every Sunday. The founder of a Meetup group for local fans, Morris' dedication has gotten in-person appearances from former players, the Backstage a shoutout from coach Pete Carroll and Seahawks fans a discount on food and drinks. —Carman Tse

What better way to enjoy a football game than with some all-American BBQ? Bludso's Bar & Que over on La Brea Ave. in the Fairfax District will be airing the big game on their 12 TVs. And since the restaurant's co-owned by Jason Bernstein and James Starr, the dudes behind Golden State and the newly opened Prime Pizza, they'll be debuting their Prime Pizza buffalo chicken wings over at Bludso's—for $1 each. They'll also be offering drink specials. Reservations are required for this one, so book now before the spots fill up. 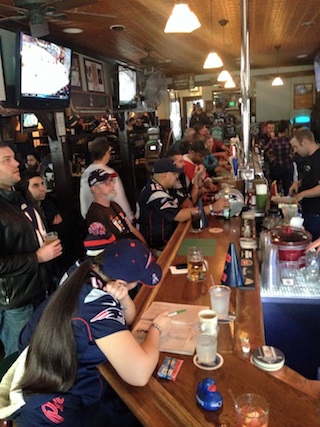 A shamrock emblazoned with all four Boston teams is the logo this Santa Monica Irish pub, so you know this is the spot year-round for your Sox, Celtics, Pats and Bruins games. Cozy in its modest size and with unassuming brick walls and a stately hardwood floor, any Northeastern transplant will feel right at home at Sonny McLean's. Their food menu even hearkens back to home, with "traditional New England, local California and Irish favorites with a California cuisine flair," including corned beef, bangers and mash, shepherd's pie, and a breakfast menu that features Sonny's Irish Potatoes and Eggs, of course. "Who says you're 3000 miles away?" —Carman Tse

If you don't want to leave your dog at home watching the Puppy Bowl while you watch the Super Bowl, Fat Dog's got you covered. In addition to their TVs already up in their Beverly Grove restaurant and bar, they'll be bringing in extra TVs so you can watch it outside in their dog-friendly patio. They'll be serving $3 draft beers from 2:30 p.m. until the game ends. And if you get the munchies, they have $5 surf and turf items. The surf items will include Maine lobster rolls, steamed snow crab, oysters on the half shell, and shrimp and grits. As for their turf, expect grilled bratwurst, Swedish meatballs, hot wings and beef tenderloin on a stick.

Pasadena's Dog Haus Biergarten will be celebrating the Super Bowl game with a pretty sweet set of food and drink specials. If you want to pre-game, they're hosting a build-your-own Bloody Mary bar (each drink $7) from 11 a.m. to 3 p.m. They'll also be offering all day special-priced beers from $2.50 to $4, $4 well drinks, $2 off specialty cocktails, and $1 off Haus wines. You can also get burger sliders for $1 a piece.

Tony's Darts Away and Mohawk Bend

This is for the vegans who want to partake in Super Bowl feasting. The owner of Tony's Darts Away in Burbank and Mohawk Bend in Echo Park are offering meat-free options along with craft beers on tap. On game day, Tonys Darts Away will be whipping up their Vegan Ball Park Dog, Vegan Whings, Vegan Curly Fries and Vegan Buffalo Wrap; and at Mohawk Bend, Vegan Sliders, Vegan Whings, Vegan Chili Fries and Vegan Nachos. They'll also have non-vegan versions of all those dishes. Mohawk Bend is also offering their happy hour food menu all day long. 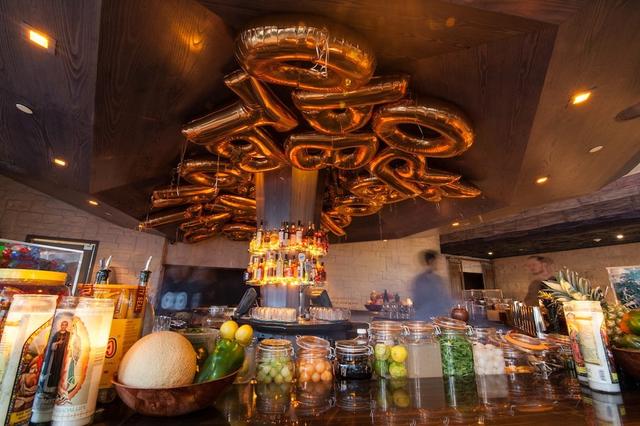 Pot Bar in the lobby of the Line hotel (Photo by Carrie Shaltz, courtesy of Pot Bar)

Pot Bar at the Line

Chef Roy Choi's Pot Bar in the lobby of the Line hotel will be celebrating the Super Bowl game K-Town style. They'll be serving up Korean pub food, $15 pitchers of beer, and $9 beer and shot specials. The doors open at 1 p.m., but you can bide your time until the game starts with beer pong, cornhole and Jenga.

Pre-gaming is an important part of the Super Bowl experience, and that's where Wirsthaus steps in. The German pub will be offering their "Kegs and Eggs (and Sausage)" brunch special for $27—which includes sausages, a side of fried potatoes and all-you-can-drink draft beer—before the kickoff from 1 p.m. to 3:30 p.m. And then you can watch the Super Bowl on their six big-screen TVs either inside or outside in their patio, which is dog-friendly. They've got a serious list of German beers on their menu, so you can cheer on your favorite team with enough beer to keep you going.

Historic Irish pub Tom Bergin's is one of those cozy L.A. institutions that you can't help but return to. Even though they're known for their Irish coffees, they've got some other drinks and dishes up their sleeves to keep you sated through the Super Bowl. The pub will be showcasing the game on their six TVs throughout the bar, and offering specials like $4 canned beer, $6 drafts, $9 build-your-own boilermakers, dishes like chicken wings (BBQ and Buffalo) or sliders for $8, and a smoked beer can cornish hen for $16. 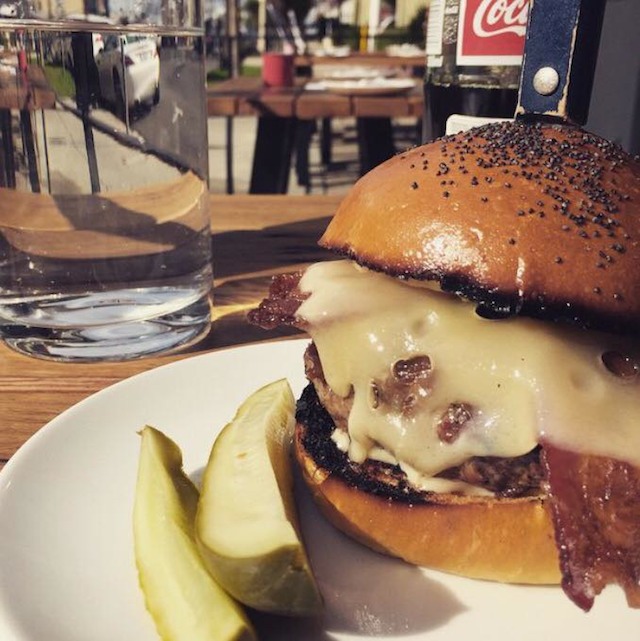 Barrel Burger at Barrel and Ashes (Photo via Facebook)

Barrel & Ashes is a hot new Texas BBQ restaurant addition to food scene out in L.A.. What makes it special is that the owners at the helm of the smokehouse are two chefs who've come from the fine dining establishments of French Laundry and Bouchon. So, if you want to eat well while watching the game, this is the place to be. They'll be ready for Super Bowl Sunday, blasting the game on their TVs throughout the restaurant and bar, and will be open all day from 11 a.m. to 11 p.m. They'll have 24 oz. beer specials, and be serving up some dishes like their Texas Nachos, wings (smoked, habanero BBQ and sweet BBQ), tri-tip sandwich and burgers. 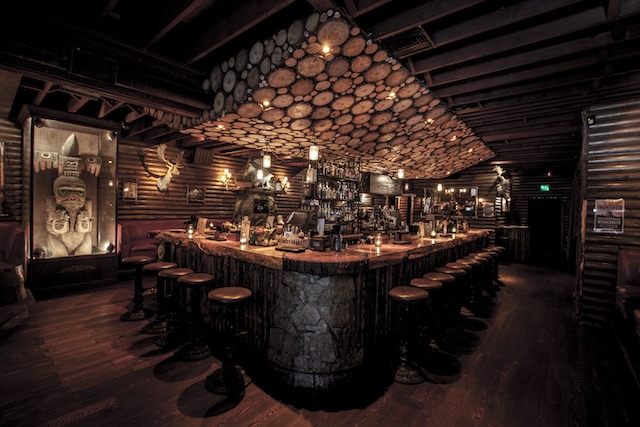 The bar recently installed some TVs and are prepped for the big game. They'll be open right when kickoff starts at 3:30 p.m. and will be offering $3 Olympia beers until happy hour kicks in starting at 5 p.m. and going until 9 p.m., where you can get drinks off of their $5 happy hour menu.

Plan Check is offering their gourmet take on Super Bowl favorites and fast food to all of its locations—Sawtelle, Fairfax District and downtown. They'll have items like Chorizo Chili Cheese Fries, Spicy Chorizo Chili Burger, 9 Layer Dip and Buck Fifty Buffalo Wings. Plus, they'll have special game day craft cocktails like a bacon-infused old fashioned dubbed "The Pig Skin" and "The 12th Man Punch Bowl" for big groups. And to top it off, they'll be hosting their first chicken wing eating contest during the pre-game. There will be prizes: sign up is at 2 p.m. and get your competitive side down at 2:30 p.m. If you want to make a reservation for a table, email Plan Check at superbowl@plancheck.com.