Over 100 Years Later, The Water Battle That Inspired 'Chinatown' Reaches A Truce 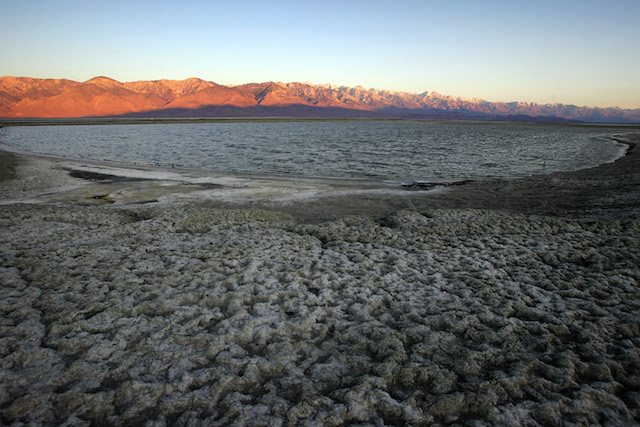 Over a century since Los Angeles grabbed land in the Owens Valley to steal water away for what would grow into a city of almost four million, a truce has been reached in a long-fought battle that resulted in its wake. The new deal will eventually save Los Angeles up to 10 billion gallons of water a year and control the dust and air pollution that has plagued the Eastern Sierra valley.

The dry dustbowl left behind by the draining of the Owens Lake is at the center of the deal reached between the LADWP and Great Basin Unified Air Pollution Control District. It became the largest source of particulate air pollution in the country, but communities in the Owens Valley were powerless to hold Los Angeles accountable for decades. Tensions grew between the urban and rural communities. "It’s not an understatement to say that resolving Owens was similar to resolving the Israeli-Palestinian conflict. Bad blood had just been passed on through the generations," vice chairman of the DWP William W. Funderbunk told the New York Times.

Passage of the Clean Air Act and state laws in the early Eighties finally got the city to sign an agreement in 1997 to clean up their mess. For the past two decades Los Angeles has used 25 billion gallons of water a year to flood the bed in order to cut down on the dust. A new, mostly waterless, method will instead rely on tractors to dig 3-foot furrows every few years in the mud and form large dirt clods that would bottle up dust. The process has already begun last month according to the LA Times.

Beginning in the early 20th century, individuals posing as farmers or ranchers began buying water rights and land in the valley 200 miles to the north on behalf of Los Angeles, a growing city that was in dire need of water. Owens Lake, a formerly 100 square mile body of water that was already being exploited for agriculture in the valley, soon turned into a dry lakebed once the Los Angeles Aqueduct began tapping the Owens River in 1913. The story is familiar to most as a fictionalized account from the 1974 film Chinatown. At a ceremony last month Mayor Eric Garcetti remarked, "The city has accepted its responsibility. We took the water."

For one particular person, it was a worthy battle won and fought. Ted Schade, the official in charge of air quality in the Owens Valley, had fought the city of Los Angeles for over 24 years to control the dust in the region. Upon the completion of the deal, he dropped the mic and tendered his resignation: "The fighting is over, and the path forward is clear. So, I'm resigning in December. My job here is done."