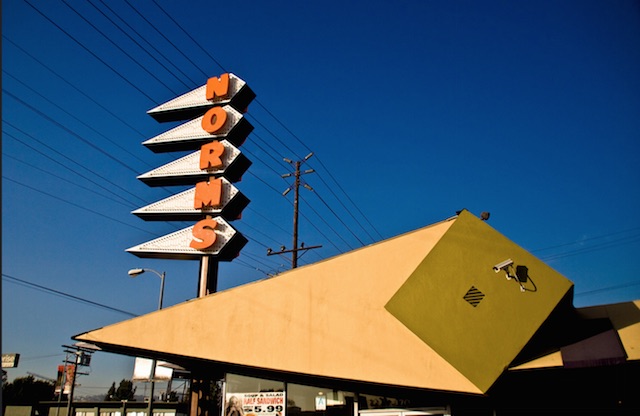 Today, L.A.'s Cultural Heritage Commission unanimously decided to consider Norms restaurant on La Cienega Blvd. as a potential historic monument, saving it from demolition for the time being.

The Norms on La Cienega Blvd. is probably familiar to even those who have never set food inside, given its big neon sign and distinctive Googie architecture. The restaurant's owners got a demolition permit from the L.A. Department of Building and Safety on Jan. 5, L.A. Times reports. Los Angeles Conservancy, however, had submitted an application to make the building a historic monument in December.

The Norms restaurant chain was founded in 1949 by Norm Roybark, a used car salesman. The first one was built on Sunset Blvd. near Vine St. in 1949, and the one on La Cienega opened in1957. The La Cienega location is currently the oldest surviving Norms.

This location as well as several others were designed by Armet & Davis, an architecture firm that would also design several other Googie coffeeshops and restaurants in SoCal—Pann's, Holiday Bowl, Corky's Restaurant, and numerous Big Boys and Denny's.

Regarding Norms. This is concerning. The display case is totally empty right now. #Save #NORMS ! pic.twitter.com/RzIctJPE4l

Norms remained in the Roybark family for three generations until they sold the chain late last year. The new owner, Jim Balis, told Los Angeles Magazine writer and history buff Chris Nichols that he wasn't sure why they sold, but Balis has a history with chains like Dunkin Donuts, Fatz and Stick Fingers Smokehouse. Balis is currently in the process of moving from Idaho to Los Angeles. He told Nichols, "We think [Norms is] a great company that has a great heritage and is an iconic brand in Southern California. We're very passionate about what it stands for."

In a statement from the Roybark family at the time of the sale, the family said, "The new owners were carefully selected to protect the legacy of Norms."

The La Cienega Norms is not owned by Balis, but by KDM Holdings LP, according to city documents. The owners said today that while they did obtain the demolition permit, they currently have no plans to tear the restaurant down, CBS reports. Regardless, Norms is now protected for 75 days, and then the final decision as to whether it is or is not a historic monument will be up to the City Council.