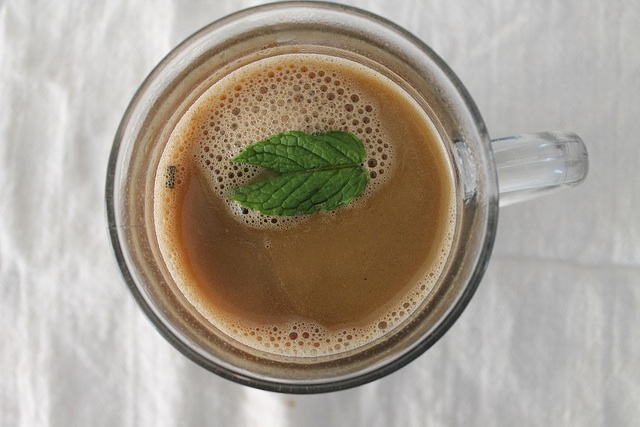 Bulletproof coffee (Photo by thedabblist via the Creative Commons on Flickr)

The buttered coffee beverage trend—dubbed Bulletproof coffee—that's supposed to help with weight loss is spreading its wings in Los Angeles now. The guy who popularized the drink in the U.S. is planning on opening his very first standalone Bulletproof Coffee shop in Santa Monica in February.

A lot of folks have jumped on the Bulletproof coffee train. Crossfitters on paleo diets love it, actress Shailene Woodley swears by it, and a Seattle barista has even created a weed-laced Bulletproof Coffee version since marijuana's legal in Washington.

Bulletproof coffee, a drink that's trademarked by Bulletproof Executive founder Dave Asprey, is a mixture of coffee; unsalted, grass-fed butter (which is used over regular butter because it has higher Omega 3s and vitamins); and medium-chain triglyceride (MCT) oil (a type of saturated fat that's easier to digest and prohibits fat storage that many body builders and Crossfiters have implemented into their diets), according to the New York Times and Livestrong.

It's Asprey's version of a yak butter tea he tried while he was traveling in Tibet (which already sounds like the start of film where a man takes a journey into his own self-discovery). He tells the Times that when you drink Bulletproof coffee, the high-calorie drink curbs hunger, promotes weight loss, and helps you stay mentally alert.

This isn't the first place in Los Angeles to serve this drink; Erewhon has been selling it for years, according to Eater LA. At Asprey's soon-to-open coffee shop, he'll also be giving customers the option to add a collagen shot (another health craze in liquid form) to their Bulletproof coffee that supposedly helps make skin look more youthful, Well + Good reported.

But wait, there's more. According to Well + Good:

Besides the coffee, food and supplements, Asprey’s building some innovative “bio-hacking technology” into the shop that will be great for your overall health. He’s installing lighting compatible with your circadian rhythms, a Whole Body Vibration platform for muscle and bone stimulation (which you’ll actually be able to purchase), and there’s a small seating area where the furniture and flooring will be “connected to the earth.”

However, there are some skeptics. Though Christopher Ochner, Ph.D., research associate at The New York Obesity Nutrition Research Center at St. Luke's-Roosevelt Hospitals, told Women's Health that MCTs could help with mild weight loss over time and regulate cholesterol levels, having too much of it could add too much saturated fat in your diet. Basically, moderation is key. He says 1 tablespoon of grass-fed butter and 1 tablespoon of MCT oil makes up more than 100 percent of your daily recommended intake of saturated fats.

"It's an extra 200-300 calories, so it has to replace some food or another caloric beverage," he says. "Otherwise, you would gain an extra 20 to 30 pounds each year by having a cup per day."

For that reason alone, Asprey won't be serving any breakfast items at his shop, as Bulletproof coffee is supposed to serve as a meal replacement. He does plan on serving a lunch menu though. Bulletproof coffee won't be a cheap drink though—it's supposed to cost the same price as a fancy latte. The store's expected to open as early as late February, according to Eater LA.

Bulletproof Coffee is located at 3110 Main St. in Santa Monica