Highlights From The 2015 Golden Globes 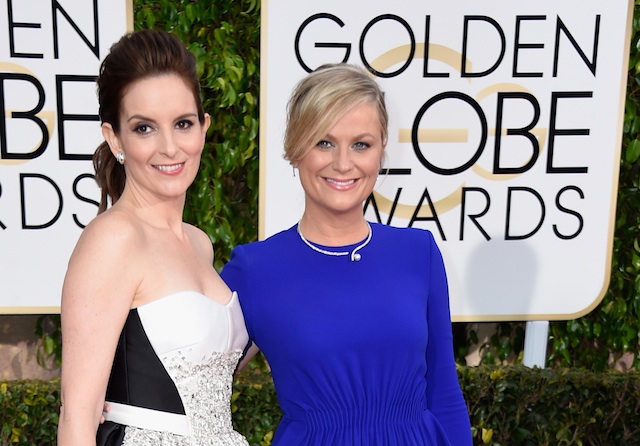 Tina Fey and Amy Poehler, the hosts of the Golden Globes (Photo by Frazer Harrison/Getty Images)

The Golden Globe Awards may be one of our favorite awards shows based on all the crazy things that happen with all the free-flowing alcohol they hand out to their celebrity guests. Tina Fey and Amy Poehler are hosting as their third and last time for the Golden Globes, and they're not holding back with any of their jokes, with a "Would you rather?" game on which actors they'd prefer to bone (an enthusiastic thumbs up from Fey to actor Chris Pine), and burning both George Clooney and Bill Cosby on stage with some jabs.

Here are the best, worst, and most hilarious and awkward moments of this year's Golden Globes.

Over on the red carpet, there was this sweet moment between Jennifer Aniston and Kate Hudson where Hudson got herself a butt rub and pat:

George Clooney's new wife Amal Alamuddin gets awkwardly interviewed by E!'s Giuliana Rancic. Alamuddin gives Rancic the side eye after Rancic takes a shot of tequila and then asks Alamuddin if she's tried it. Alamuddin's response? "I have tried it, yes."

There's also that really uncomfortable moment on the red carpet when NBC host Natalie Morales flubs and calls How to Get Away With Murder's Viola Davis..."Shonda" (as in Shonda Rhimes). Whoops!

You know that "woman dancing" emoji you've been using? Well, we found her:

It looks like Jeremy Renner is staring at Jennifer Lopez's boobs and then makes this gross joke about them, calling her breasts "Globes":

Margaret Cho poses as a North Korean in military garb, demands to take a photo with Meryl Streep. While Michael Keaton gets up to snap the photo, Benedict Cumberbatch jumps up to photobomb them. So much going on.

Fey and Poehler go there with the Bill Cosby rape allegations: "In Into the Woods, Cinderella runs from her prince, Rapunzel is thrown from a tower for her prince, and Sleeping Beauty just thought she was getting coffee with Bill Cosby,” Poehler jokes. The Cosby bit comes on around the 8:45-minute mark in the video below:

The entire Golden Globes crowd bubbles with excitement when Prince gets on stage to present an award for Best Original Song for a Motion Picture. He carries with him a vanity cane because he's Prince and he can do whatever he wants to do.

Prince made a surprise appearance at this year's #GoldenGlobes to present Best Original Song! https://t.co/KdCx55cNnD

Prince gets compared to Disco Stu.

Ricky Gervais has his own John Travolta "Adele Dazeem" moment when he announces Annie's Quvenzhané Wallis as "Kwevinjohnny Wallis."

Jeffrey Tambor, winning Best Actor for his lead role on Transparent says during his speech, "I would like to dedicate my performance and this award to the Transgender community."

Girls creator Lena Dunham (who we thought had deleted Twitter) has an awkward moment near The Normal Heart star Mark Ruffalo:

And Dunham also takes this photo:

Jemima got weird so we replaced her

How is this possible that this is Kevin Spacey's first Golden Globes win? Finally, he won for House of Cards, and then he swore on stage: "This is the eighth time I've been nominated, I can't believe I fucking won," he says at the 1:27-minute mark in the video below:

Stars are just like us, too! They make an ugly face when they cry. Model Chrissy Teigen might just become a meme for making her ugly crying face. She teared up when her husband, John Legend won a Golden Globe for best original song for Selma.

But Teigen knows how to play it cool and take a joke, and makes fun of herself:

If you thought everyone at the Globes looks extra sweaty and hot, you're right. According to Vanity Fair, the air conditioner wasn't on during the awards show at the Beverly Hilton, and everyone tried to cope by fanning themselves like crazy.

Why everyone at the Golden Globes looks so uncomfortably sweaty. http://t.co/DCOvrgM9Z4 pic.twitter.com/KKtyp2duq8

There was a bit of a scare when paramedics were called to the Golden Globes after Jane Fonda's boyfriend Richard Perry fainted at the table that they were sharing with Sienna Miller, Mark Ruffalo, and Channing Tatum. However, they called off the paramedics after Perry seemed to be fine; he was just too hot sitting under the stage lights.

And the award for "Best Portrayal of a Human Wearing Glasses" goes to Lupita Nyong'o (photo via @ditzkoff) pic.twitter.com/J5q6a7PnqL

Everyone agrees that Kristen Wiig and Bill Hader should be the hosts for next year's Golden Globes:

While Clooney gets awarded a lifetime achievement awards, folks on Twitter are upset that Batman and The Facts of Life aren't included in the retrospective. Just look at Clooney's luscious locks—how could they skip this?

And seriously, how could #TheGoldenGlobes forget Clooney's appearance on The Golden Girls? pic.twitter.com/ObLsda5qpD

Ruth Wilson from The Affair gets a Golden Globe for Best Actress in a TV Drama, and then gives a shout-out to her co-star Dominic West (McNulty from The Wire!) for his hot ass: "Dom, your ass is something of great beauty. Don't let anyone tell you otherwise."

Bill Simmons, Grantland founder, had a good point about The Affair winning:

We get more crying faces when Naomi Watts starts to tear up after hearing Patricia Arquette's winner speech for her Best Supporting Actress in a Motion Picture award for Boyhood.

What a difference a year makes for a Chris Martin-less Gwyneth:

Matthew McConaughey's beard is out of control:

Why was Matthew McConaughey pretending to be a Civil War general from Georgia just now?

Michael Keaton gets us all teary-eyed when he gives a heartfelt speech thanking Birdman director Alejandro Inarritu, talking about his childhood, and about his best friend: his son, Sean. Aw...

And in an awesome win, The Grand Budapest Hotel gets Best Motion Picture for Musical or Comedy, which spawned this photo. The internet is a wonderful place.

And finally, director Richard Linklater's Boyhood gets the top honors for Best Motion Picture, Drama. However, instead of doing an acceptance speech, Linklater has Jonathan Sehring, the head of IFC, give a speech. It may have something to do with how Sehring, who is known to have played a critical role in Boyhood, got cut out of a producer credit on the film from the Producers Guild of America last week due to their stringent rules on all the work a producer needs to be put in to get the producer title credit, according to the New York Times.