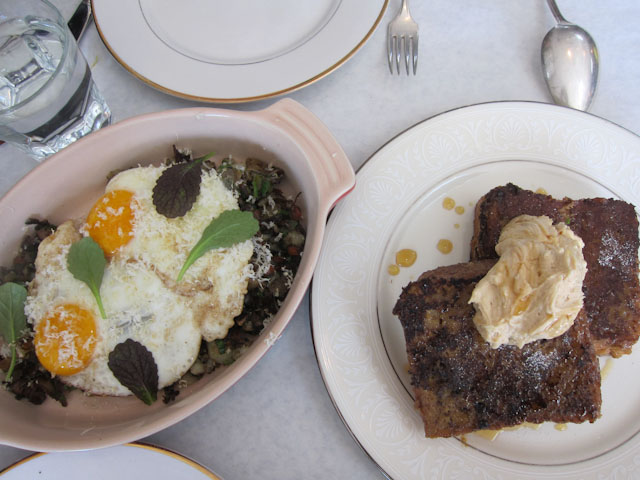 Just a stone's throw away from other bustling restaurants in Beverly Grove is a new French brasserie helmed by some heavy hitters in the food world—and they recently started offering brunch service featuring classic dishes with haunting flavors.

Terrine, an eatery focused on the amalgam of Californian comfort food and French dishes, opened its doors to the public early December, and up until last week had only been serving dinner. Now, brunch is served from Fridays through Sundays. The restaurant is the brainchild of co-owners, restauranteur Stephane Bombet (Faith & Flower, Picca) and chef Kris Morningstar (Ray's & Stark Bar, and also a judge on Esquire's Knife Fight). They've also got on their team wine director François Renaud and cocktails barman Ryan Wainwright, both from The Tasting Kitchen. It's a mega-team to say the least. 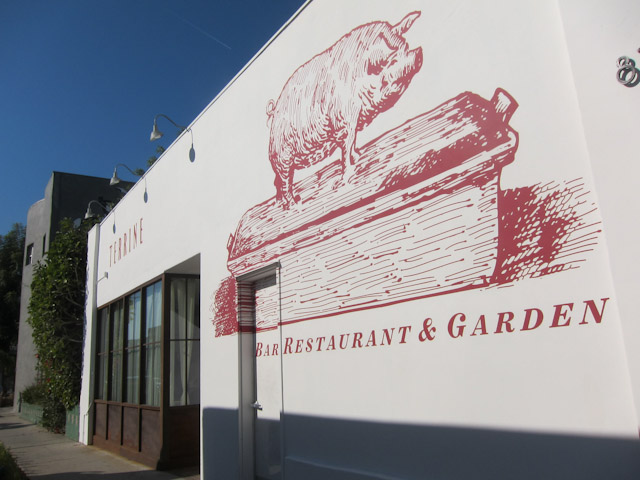 The signage outside of Terrine (Photo by Jean Trinh/LAist)

The restaurant is elegant, yet unpretentious and casual. The design is a world of difference from the garish look from the previous tenants, Sirena. When you walk in, lots of natural sunlight fills the main room from its big windows in the front and in the back, which looks out to a garden patio with a huge tree as the centerpiece. There are metal elements everywhere, from the copper bar to the brass frames around the many mirrors that adorn one of the walls. There's an impressive wine collection on display by the bar. Outside, there are lights strung around the tree that get lit up at night, and plenty of white-covered tables with red-orange-covered cushy benches and chairs. 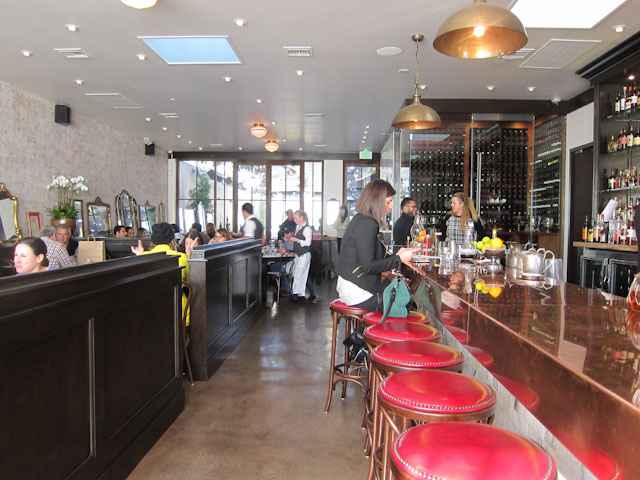 Inside Terrine (Photo by Jean Trinh/LAist) 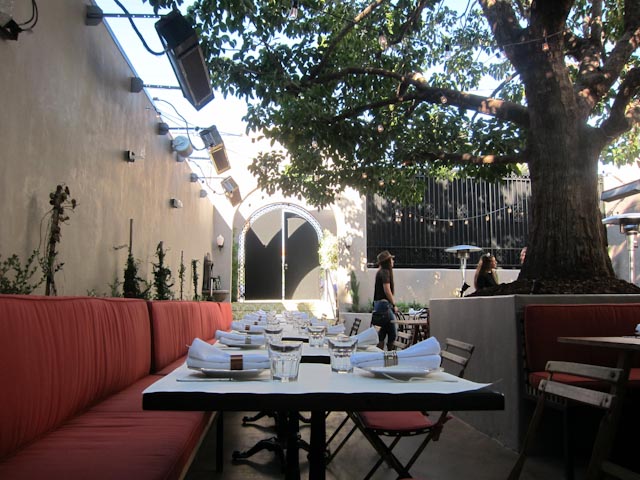 Outside in the back garden at Terrine, with a 20-year-old tree providing shade (Photo by Jean Trinh/LAist)

Morningstar tells LAist what guests can expect from their new brunch menu: “Similar to the dinner menu, the goal of our brunch is to take familiar dishes that our guests crave and then give them bold, addictive flavors. A few examples would be Pain Perdue with sea salt caramel frosting or the Smoked Beef Brisket Hash with fresh horseradish."

We were surprised to find that one of our favorite dishes we tried is a salad—the Frisee Aux Lardons. (We have to admit we sometimes favor the heavier meat dishes for brunch.) It's a light salad with complex flavors and textures that are still making us crave it days after we took our first bite. The frisee is accompanied by strips of bacon chunks and a slow-cooked egg that you get to break open and mix into the salad, giving it a creaminess from the almost-runny yolk. The mustard vinaigrette gives it a punch with its tartness, perfectly rounding out the whole dish. 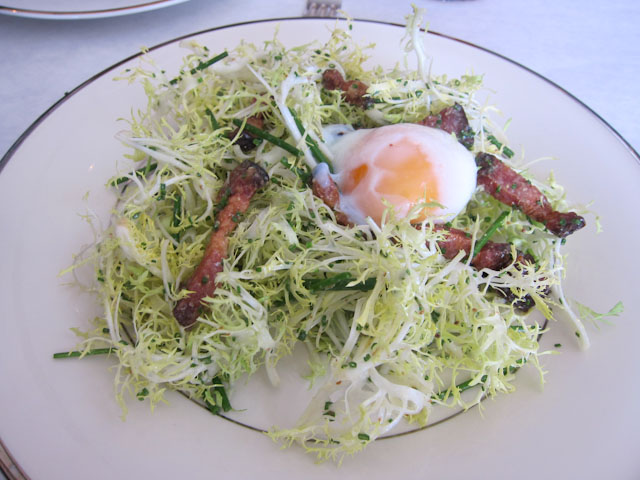 The Frisee Aux Lardons at Terrine (Photo by Jean Trinh/LAist)

There's also their House Smoked Brisket Hash that comes out in a beautiful presentation, with what feels like a light snowfall of elegantly grated pecorino and leaves likes petals atop two sunny-side up eggs resting on the hash. It's something that reminds us of the classic brisket hash dish with an extra ooph of horseradish.

We thought we'd fall head over heels in love with the Pain Perdu, a vanilla-battered French toast with caramel frosting, maple syrup and sea salt, it was a little bit of a letdown. The toppings outshine the actual French toast, which is a little chewy and dry for our taste. But the frosting and maple syrup combination is to die for, and something we wish we could spread over everything.

Terrine boasts a decently-sized menu for brunch with lots of other Californian-meets-French brunch favorites (including their take on huevos rancheros and fried chicken and grits), pizzas, and charcuterie plates, using all local and fresh ingredients. They also have a cocktails menu made specifically for their brunch, with classic drinks from a Bloody Mary to their take on the Pimm's Cup, as well as sparking wine staples like the French 75 and their Winter Champagne Cocktail—a light one perfect for brunch with lemon and spiced cranberry cordial. They're not revolutionary libations, but they're familiar and made well with high-quality ingredients. 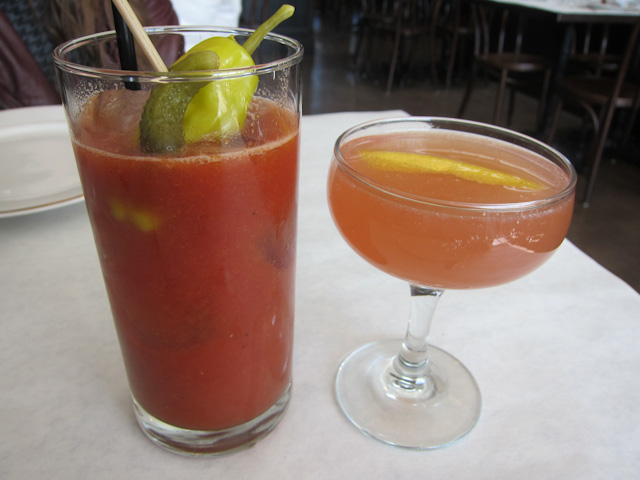