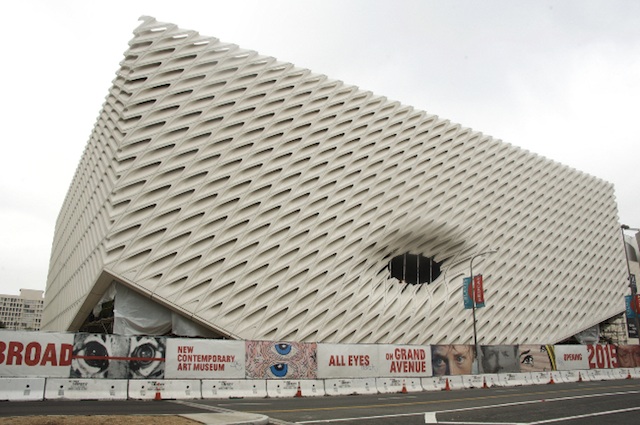 The facade of the Broad Museum downtown was finally unveiled today after months of construction delays and being hidden behind scaffolding.

The white lattice-like "veil" that wraps around the building on Grand Avenue (near the Walt Disney Concert Hall and MOCA) looks like a giant, futuristic honeycomb with a peculiar hole in the middle. According to a statement from The Broad Museum, the indentation in the building is an architectural feature called "the oculus." However, over at LAist, we think it resembles a bellybutton, a Hannibal Lecter-esque mask, or the Eye of Sauron from Lord of the Rings.

It's a two-story, 120,000-square-foot building designed by New York firm Diller Scofidio + Renfro. The veil is constructed from 2,500 fiberglass concrete panels and 650 tons of steel. When it's open, the museum will have a restaurant, a partnership with restauranteur Bill Chait (of Bestia and Rebulique), according to Downtown News. There will also be a 24,000-square-foot outdoor courtyard with olive trees, and a 105-foot escalator and 318 skylights on the top floor.

Here's a time-lapse video of the scaffolding coming down:

The museum, which is slated to open in fall 2015, will carry 2,000 pieces of contemporary art from the personal collection of philanthropist Eli Broad and his wife Edythe. Last year, Broad announced that general admission to the museum would be free.

It's been a long time coming for this museum, which began construction in 2012. The opening of the museum, which was originally slated for 2014, was delayed due to a series of issues with the honeycomb veil, which in the end didn't turn out the way the architects had originally envisioned, according to the New York Times. They had to ditch their original design plans after the German fabrication company they hired to create the veil weren't able to deliver an "acceptable version of the veil" to the Broad, according to the L.A. Times, and due to its complexity and costs. The museum says the problem has delayed the opening by at least 15 months, and has added at least $19.8 million more in costs. Broad has a lawsuit pending against the German company.