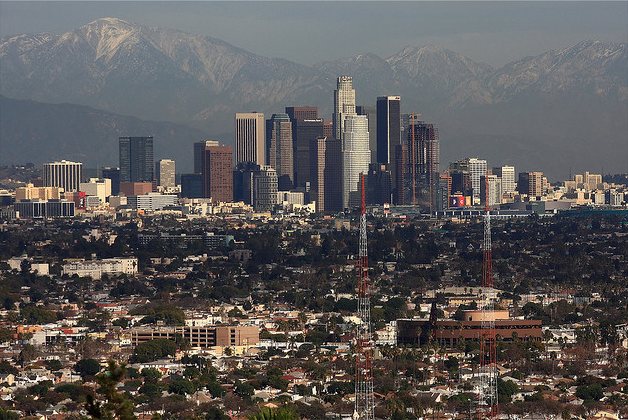 Brrr! It's cold in here. (Photo by KingoftheHill. via the LAist Featured Photos pool on Flickr)

Before you get into your party outfits for New Year's Eve, you might want to consider layering up a bit because it's going to be a chilly night in Los Angeles.

The National Weather Service is reporting that we can expect "cold and wintery weather" from Tuesday through Thursday this week. As for Dec. 31, we'll be seeing highs in the mid-50s and lows in the high-30s. (We're actually getting seasons in our city!) And if you're one of the folks who are planning on camping overnight for the annual Rose Parade, make sure you bundle up because the temperatures are expected to be around the same in Pasadena that night and on New Year's Day.

The cold storm that's coming by way of Canada is expected to bring snowfall to the Antelope Valley and the low-elevated areas of the Los Angeles and Ventura County Mountains late Tuesday night and dwindle by Wednesday afternoon. In addition to the snow, there are expected wind gusts to be blowing at 10 to 20 mph.

There's also light rain expected in the L.A. Basin during this week. As for people who are thinking about traveling on the roads during the holiday, KPCC reports that mountainous routes like the Cajon Pass in San Bernardino County, the 5 Freeway near the Grapevine area, and the mountain pass over the 14 Freeway near Santa Clarita could be getting up to several inches of snow.

In case you're still deciding on what to do to ring in the new year, we have plenty of indoor options on places to party here. If you're down to brave the cold for Los Angeles' biggest New Year's Eve Party at Grand Park downtown, here's all the info you need to know about what's in store and how to get there.