Metro Says If You Charge Your Phone In Their Stations, You're Stealing Their Electricity 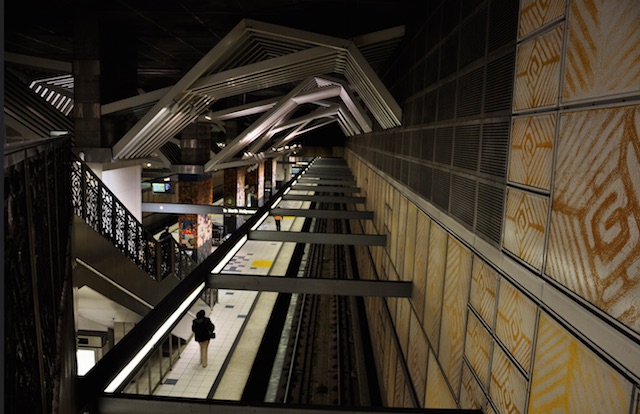 If you've ever stopped to charge your cell phone in a Metro station, you should know that Metro considers that stealing and it's not okay with them.

You may have noticed on your commute that there are several seemingly available outlets in Metro stations. And maybe you found it sort of reassuring to know that if your phone ran out of juice and you needed it, you could charge it in a well-lit space with security cameras. However, Metro spokesperson Paul Gonzales confirmed to KPCC that three people have been arrested and charged with theft of utilities for doing just that.

KPCC was responding to a tip from riders that passengers were being ticketed for charging their phones using the outlets found on the train platforms. Gonzalez said that while no tickets were actually issued, there were those three arrests.

"The electrical plugs are for maintenance use only, not for the general public. It's not free electricity," he said.

It should be noted that utility theft business was not the only charge for those folks; authorities also found them in possession of drugs and counterfeit money.

Gonzalez also said that with trains running every 6 to 12 minutes, you don't have much time to charge your phone. However, I'm sure many of us could think of multiple scenarios in which we would voluntarily wait for the next train to charge our phones if they were dead or low. Just knowing that you can call 9-1-1 if you have to is reassuring.

Gonzalez said that if riders bring the subject of public charging stations up to Metro, they will consider it. You can let Metro know how you feel about this or any other issue by visiting their comment/complaint page here and tweeting at them using @metrolosangeles.

Update, 1:45 p.m.: Mayor Eric Garcetti, who is also Metro Board Chair, has told Metro to stop arresting people for charging their phones, KPCC reports. As long as it's not interfering with any Metro operations, riders can feel free to use the outlets for a quick charge.

"This is simply common sense," the mayor said in a statement. "I want our law enforcement resources directed toward serious crime, not cell phone charging."