Someone Fell Off The Trolley At The Grove, Shoppers 'Just All Walked Around As If It Was Normal' [Updated] 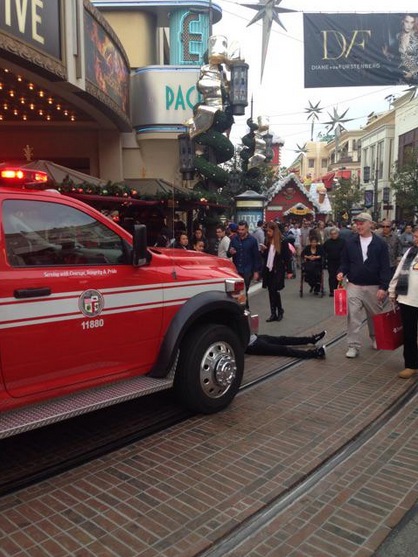 Street artist ThankYouX tweeted out this photo yesterday afternoon of a LAFD firetruck parked in front of the Pacific Theatre at the Fairfax neighborhood shopping plaza that is normally extremely crowded with holiday shoppers this time of year. The photo shows a person lying on the ground close to the trolley tracks. ThankYouX tweeted that a man had fallen off of the trolley. He later told LAist that the incident happened around 4 p.m., and that he saw a trolley pass and then saw the man on the floor.

"It was weird how nobody was really paying attention they just all walked around as if it was normal," ThankYouX said. "He appeared to be there by himself."

Brian Humphrey, the Public Information Officer at LAFD, tells LAist that their department received a call from a passerby saying that a person had fallen ill in front of the movie theater. However, he described the person as an adult female not a man. They spent half an hour with her; however, she did not need to be taken to a hospital for any treatment.

LAist also gave Caruso Affiliated, the company that owns the Grove, a call about the incident, but haven't heard back yet.

UPDATE 3:50 p.m.: Liz Jaeger, a representative of Caruso Affiliated, tells LAist that nobody fell off or was injured by the trolley. She says that the LAFD was responded to an unrelated incident in front of the movie theater.