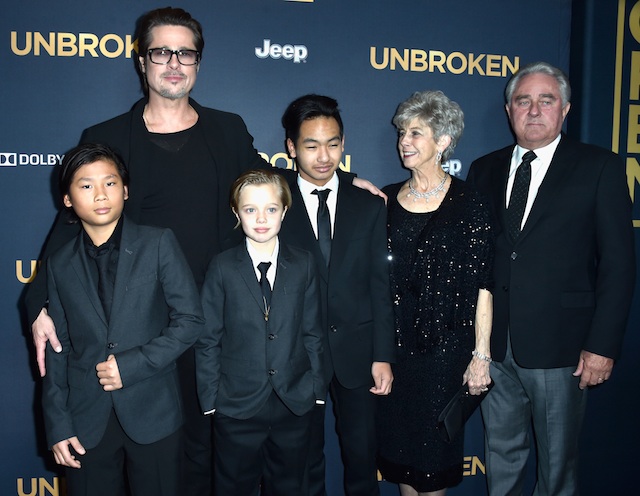 Brad Pitt and Angelina Jolie's children walked the red carpet in Hollywood last week for the premiere of their mother's film Unbroken—and their two sons and 8-year-old first-born Shiloh donned suits and ties.

Shiloh has striking blue eyes and short blond hair, like a little doppelganger who could be a stand-in for a young Pitt. Shiloh was assigned the female gender at birth, but the Jolie-Pitts, being pretty much the most understanding and loving parents, have supported Shiloh's decision to dress in suits—as well as respect Shiloh's wishes to be called John.

In an interview with Vanity Fair (via Daily Mail) in 2010, Jolie said. "Shiloh, we feel, has Montenegro style...She likes to dress like a boy. She wants to be a boy. So we had to cut her hair. She likes to wear boys’ everything. She thinks she’s one of the brothers...She dresses like a little dude. She likes tracksuits, she likes [regular] suits."

Pitt said back in a 2010 interview that when he would address his then 3-year-old by name, Shiloh would ask to be called "John," and since then the name has stuck with the family, according to The Telegraph.

A source told the Evening Standard in 2012 that Jolie was furious with Pitt's mother, Jane Pitt, for buying John girly clothing, and finds it disrespectful.

The Telegraph interviewed Linda Blair, a clinical psychologist and author of The Happy Child, who said that exploring different genders is perfecting normal and it's important not to overreact as a parent. The way the Jolie-Pitts are acting is setting a fine example.

“My reaction to a parent who’s saying 'my girl’s in jeans and doesn’t act like a girl', or 'my boy’s in dresses', is to say: watch, accept and see," Blair said. "Then, if it’s an attention issue, it’ll go away. If it’s exploration then they’ll have permission to do that. If it’s real, you’re giving them the time they need to make up their minds.”

The Advocate and other outlets are referring to John as "they" until they get a better sense of how John wants to identify in the meantime.