Vin Scully Nearly Lost Dodgers World Series Ring In Costco: 'I Feel Like Such A Dummy' 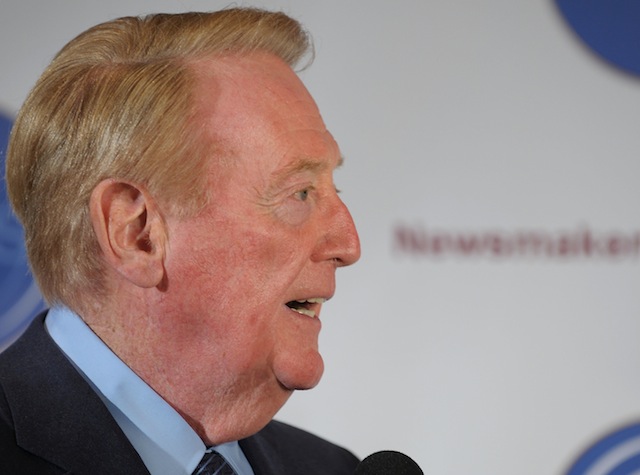 We didn't need a gumshoe for the job to solve the mysterious case of Vin Scully's missing 1988 Dodgers World Series ring—because our beloved Dodgers announcer found it minutes later in a Costco bag holding his package of ribs.

It could have been a private and less embarrassing affair like when someone thinks they've lost their glasses, and chuckle when someone tells them the pair is sitting on their head. But on Thursday, this tweet was sent out from the official L.A. Dodgers' account:

And then nine minutes later...

Great news! Vin Scully's 1988 World Series ring has been found. (This was not a drill — Vin thanks everyone for their concern.)

But it's Scully, and the whole ordeal was amusing and endearing. He even talks in the third person. "I feel like such a dummy," Scully told the L.A. Times while laughing. "Only Scully could lose a ring while putting meat in a bag."

Scully lost his treasured ring, which is one of the six he has procured over his 65-year career, while he was shopping with his wife, Sandi, at Costco. It meant a lot to him because he had given all the other rings to his children, so it was the only one he had left. It had slipped off while he grabbed a package of ribs and put it in a bag. When he realized his ring was missing, he freaked out and asked Dodgers publicity sage Steve Brener to help him, which led to the missing ring tweet.

When the Scullys returned home, his wife found it nestled safely in the same bag as the ribs.