Move Over Boba, We're All About These Sweet Addictive Vietnamese Drinks 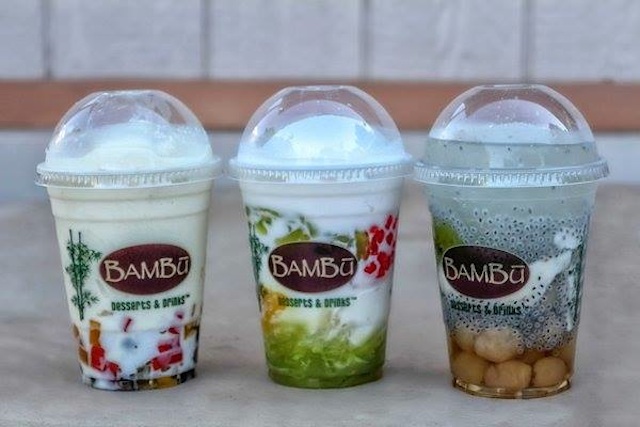 We've had so many milk tea boba drinks over the years that they've lost that special je ne sais quoi. So we're pleased to let you know about the next trendy drink that you can slurp up in a big straw. While Vietnamese "chè" desserts and drinks aren't anything new, they're quickly becoming as popular as boba in the mainstream—especially with the BAMBU Desserts & Drinks chain spreading its wings throughout the nation.

BAMBU, which was started by four sisters in San Jose back in 2008, now has over 40 locations. In SoCal, they've got spots in Cerritos, Irvine, Rowland Heights, and Westminster—and they opened their closest L.A.-centric one in San Gabriel over the summer. They're becoming the Lollicups of the Vietnamese "chè" world.

The term "chè" refers to a variety of different sweet Vietnamese desserts, drinks, soups and puddings that can either come out hot or cold. Oftentimes we'll find the desserts and drinks sold in clear plastic cups at Vietnamese grocery stores and fast-casual restaurants. They usually contain different, layered combinations of ingredients like coconut milk; pandan and grass jelly; red, white and green/mung beans; fruits like lychee and longan; basil seeds (similar to chia seeds), and even some taro.

Over at BAMBU, they focus specifically on making iced drink-and-dessert combinations that have different variations of these ingredients. The drinks have lots of fun textures (from chewy to creamy), and since they're equal parts dessert and drinks, they fit in big to-go cups. You'll be able to suck all the ingredients up in huge straws you'd normally find in boba drinks. These drinks are presented in layers of different colors. You can also customize them and let BAMBU servers know if you want to add or take out certain ingredients or make it less sweet or sweeter. Some of our favorite already tested-and-true combinations include their #1 Bambu Special, which is a refreshing one consisting of coconut juice, coconut, pandan jelly, longan and basil seed, as well as their #10 Hạt Lựu Sương Sáo Bánh Lọt, which has red tapioca, grass jelly and pandan jelly.

For the folks who aren't ready to venture into the chè drinks, they've also got a variety of milk teas and smoothies to keep you sated.

Drinks are about $4 to $5. And remember to bring cash, unless you plan on spending at least $10, which is their minimum for credit and debit cards.