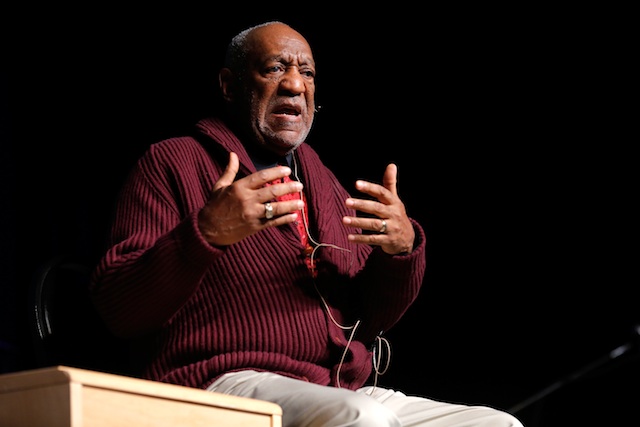 Another woman has come forward accusing Bill Cosby of drugging and sexually assaulting her. While the comedian and actor has faced over 20 similar accusations for incidents that happened over the last few decades, this one could be the first that could possibly be filed within the criminal statute of limitations in California.

Chloe Goins, 24, told the Daily Mail her account of the harrowing events that unfolded at a Hugh Hefner Playboy Mansion party in Los Angeles in 2008. (Goins is choosing to speak out publicly using her full name.)

At that time, Goins was 18 and her girlfriend invited her to the party. As they were chatting with Hefner and Cosby, Goins says that Cosby left the conversation to grab the women drinks. Soon after finishing most of the drink, Goins says, "Everything kind of went a little foggy, I started feeling sick to my stomach, and just dizzy."

When Hefner realized Goins wasn't feeling well, he offered one of her rooms for her to lie down in, Goins says. That's when Cosby, who Goins says seemed like a nice and harmless person at the time, offered to show Goins the room.

Goins claims that she blacked out, but woke up "butt naked lying on my back on a bed" with Cosby licking her toes and pleasuring himself with his pants around his ankles. After she woke up, he allegedly jumped up, put on his pants and left her in the room alone. She believes that he had been groping her and licking her breasts because her skin was moist.

Although she says she doesn't think he raped her, she says "I can't be 100% sure what he did to me, I was completely out of it."

Goins' friend confirmed her story with the Daily Mail. And her lawyer told the Daily Mail that Goins will soon be giving a statement to LAPD detectives. The Hollywood Reporter has reported that they haven't been able to reach an LAPD representative for a comment as of Monday evening. Cosby's lawyer, Martin Singer, also has not responded to The Hollywood Reporter's request for a comment on the latest allegation.

If Goins is a case of sexual battery not sexual assault, that could make a difference. Professor Robin Wilson of the University of Illinois College of Law told PEOPLE for a previous story that the typical statute of limitations for sexual battery is two years.

Recently, another woman Judy Huth, filed a lawsuit saying that Cosby forced her to perform a sex act on him at the Playboy Mansion in 1974 when she was just 15 years old. Cosby filed a $33,000 countersuit against her, claiming she's trying to extort money from him. LAPD officials said earlier this month that they are now investigating this allegation after Huth filed a report with them.

While Cosby, now 77, has mostly stayed mum on the slew of drugging and rape allegations, he broke his silence last Friday in an interview with the New York Post. "Let me say this," he said. "I only expect the black media to uphold the standards of excellence in journalism and when you do that you have to go in with a neutral mind."

His wife, Camille Cosby, also spoke up for the first time on Monday about the allegations and released a statement to the media, defending her husband. She said, "He is the man you thought you knew."

This comes on the heels of some high-profile women who have spoken up about their disturbing experiences with Cosby, which include models Beverly Johnson and Janice Dickinson.