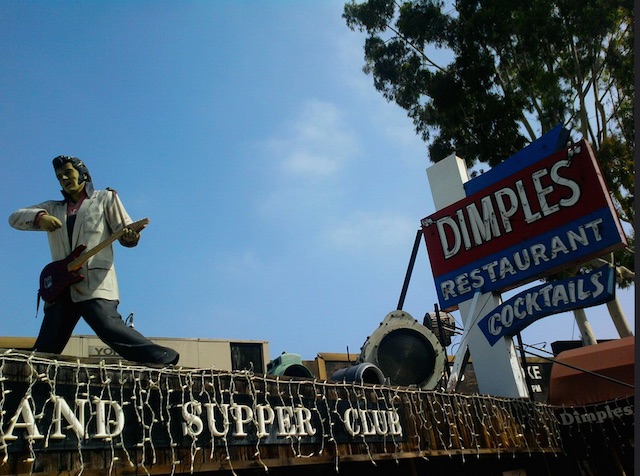 (Photo by melissssaf via the LAist Featured Photos pool on Flickr)

Dimples has billed itself as America's first karaoke bar since opening in 1982. Now this Burbank staple is shutting down to make room for a massive residential development and a Whole Foods.

We were alerted to Dimples' fate by Kimberly Snow, who has been pouring drinks and managing the bar there for 12 years. She told us that Dimples wasn't going under; rather, the bar was being pushed out to make room for Tarlaria Project, a blockwide development that will feature luxury residential units and a Whole Foods. Though Dimples knew this was coming, she told LAist that they thought they would have longer in their space. Now, however, Snow says it looks like the last songs will be sung sometime in mid-January March 31. She encourages those who want to visit Dimples one last time to check the bar's Facebook page, Twitter or Instagram for details.

"I just want everyone to know so they can get just one last great Dimples memory," she said. "It's so near and dear to so many people."

Snow says she knows many people who met their significant others or best friends via Dimples stage. She said they'd like to find a new location for Dimples—preferably in Burbank, North Hollywood or perhaps Hollywood—but with such little time left to go, she can't say for certain if Dimples will reemerge or not.

Dimples has had an odd past. The owner, Sal Ferraro, originally owned two Burbank bars—a night club and Dimples, a swing dancing bar. When swinging dancing wasn't pulling in the crowds, Snow tells us he decided to open a dedicated karaoke bar. As Snow admits, they may not have been the first bar doing karaoke elsewhere in the U.S., but as far as she knows, Dimples was the first joint to have karaoke every night of the week. And if there is a bar that can beat Dimples to that claim, no one seems to have heard of it.

The cheap drinks beguiled performers to take the stage and belt out the ballads, which would be broadcast on the Internet for anyone who cared to watch. First-time singers could don the many props offered on the stage, then take home a CD of their performance. Its proximity to Warner Brothers and other entertainment industry hubs meant the occasional famous guest—Britney Spears, Charlize Theron, Katy Perry—would stop by to do a number.

In the spring of 2013, Bar Rescue came calling for Dimples. Ferraro, in his 80s these days, had a reputation for dad jokes and being, shall we say, a little uncouth. He liked to try to make women sing "My Humps" by the Black Eyed Peas and offered a shot for birthdays known by unamused bartenders everywhere as "a blowjob shot." The bar was also in debt. Jon Taffer of Bar Rescue suggested Ferraro maybe knock that dirty old man schtick off, the New York Daily News reports. Bar Rescue also redid the karaoke system, renovated to include more seating and cleaned up the cluttered decor.

Looking at the more recent Yelp reviews, Dimples seems to have sustained the dive requirement of being the type of place people either love or hate. Start practicing your favorite karaoke jam and follow Dimples on Facebook here if you want one last hurrah.

Update: Dimples received an extension on their lease. Their new closing date is March 31.