The Hitmakers Behind 'Like A G6' Made Videos About Koreatown's History 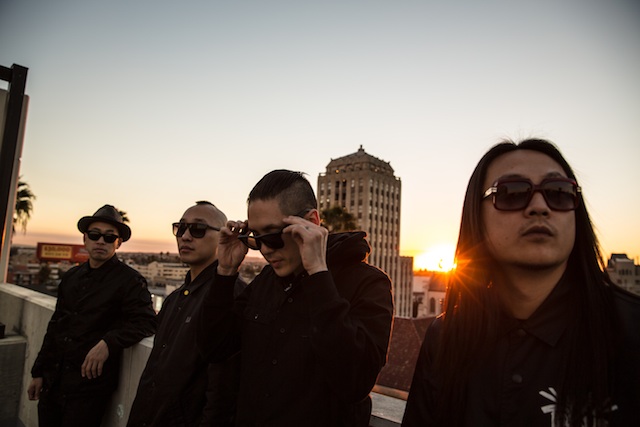 It had been two years since Far East Movement (best known for their hit "Like a G6") returned to Koreatown after a whirlwind international tour. When they got back, they found that their old stomping grounds had transformed. The bars and restaurants they once frequented could no longer afford to stay open seven days a week, and some had shuttered and changed hands of ownership. It was in this context that the members of this hip hop and electronic music quartet decided to back to their roots: in late October they dropped an album and two mini-documentaries (one of them released on Wednesday) that pay homage to this place they had called home, looking back at the history, including the L.A. Riots, that shaped it.

Their latest EP, KTOWN RIOT, was inspired by their formative years in the neighborhood. Kev Nish (whose real name is Kevin Nishimura), tells LAist that the founding members of his crew, Prohgress (James Roh) and J-Splif (Jae Choung), who are all now 32, first met in a Koreatown bar when they were teens. (DJ Virman, 31, whose real name is Virman Coquia, would later join Far East Movement as their fourth member in 2008.)

"There was this local bar that would allow youngsters to kind of chill there," Nish says. "It was very underground. We would all just go there. We’d have cliques of friends that would just meet up in parking lots and just freestyle and loiter and just kind of be kids."

Nish recalls some of the local hangouts they'd hung out at—from a club called Vibe that was on Western Avenue near 7th Street (which has since shuttered) to their go-to late night eatery, Hodori (still around!) and Mana for Korean BBQ (Mana has since moved out of the area to Little Tokyo).

When the guys started performing and recording music, Nish credits Koreatown for being the first community that didn't throw their flyers on the ground. Before they were Far East Movement, they went by the moniker Emcees Anonymous. They threw their first show at Cafe Bleu, and eventually, they would host their first Koreatown community concert, dubbed Movementality, in 2003 with a lineup of different artists at a bar called Atlas (now known as Novel Bar). The line went down the block, the show sold out, and the crew proudly put the money they collected from the entrance fees into a glass bowl and paper bag. They marched the cash over to a local drug rehab center that had helped friends of theirs in the past get back on their feet and handed the money to the pastor.

"For us, even back then, we wanted to bring different types of music and artists that we respected and loved," Nish says. "We wanted to bring it to the community. We just felt that wasn’t happening around that time, so we threw a concert and everyone [did it] out of love."

Even now, Far East Movement says they're still looking to uplift the community. They threw their annual Spam N Eggs music festival nearby at the Park Plaza Hotel in Westlake in October, bringing with them a bevy of artists, including electronic music producer and DJ Tokimonsta and rapper Dumbfoundead. In conjunction with their EP release, the guys also put out a five-minute documentary in October, called "K-Town Riot Part 1 (Respecting The Past)." They interviewed movers and shakers like Chef Roy Choi (of Kogi BBQ, POT and Chego fame), and who Nish calls "OGs of Koreatown" that included people who lived in Koreatown during the L.A. Riots in 1992. These folks shared their harrowing experiences from that moment in history. The video is comprised of old footage of buildings burning, Koreans and Korean Americans holding rifles on rooftops like snipers protecting their businesses while they were getting looted, and photos of those lives who lost their lives in the melee:

Prohgress was in grade school at the time of the riots and lived on Crenshaw Boulevard, right in the thick of it all. Prohgress told Nish he remembers his family said they couldn't go home to Koreatown, and they all had to drive to a relative's house in Orange County to get away from it all. "All the ashes were all over their window shield as if they were snow," Nish says. "His parents were just living in fear, not knowing what was going to happen."

Prohgress' father was a radio host at Radio Korea during the riots. (He is still on air today, Nish says.) At the time, listening to Radio Korea was the only way Koreans who didn't listen to English-language radio were able to get information about what was going on in in the streets, according to Nish. They were able to get news on what areas to avoid and find out information about their businesses that were getting looted and set on fire.

"It was just so interesting to me [because] it felt like the way the community was operating was like [they were in] a war," Nish says.

This all explains how they got the name of their album, KTOWN RIOT. "The riots is an idea—especially people from the old school—people that really paved the way had all gone through. And [it's] something that always stuck with them. If we could redefine that and bring some positivity toward something like that, that could be really cool."

They have so much footage and recorded interviews that they used it to put out a second mini-documentary, which released this week. It focuses on the growth of Koreatown up to today:

Nish has noticed some recent positive changes in the Koreatown community, with the addition of The Line hotel and more eateries and bars coming into town. He describes Koreatown as always being "fairly underground," and not as welcoming to other cultures in the past. Nish is Chinese and Japanese-American, but he says he fit in Koreatown when he was younger because his group of friends were all of Korean descent.

Nish says, "You go to restaurants now and it’s 50 percent Asian and 50 percent any other ethnicity and that’s just positive. It’s something we’d probably always wished for. It’s cool to see."