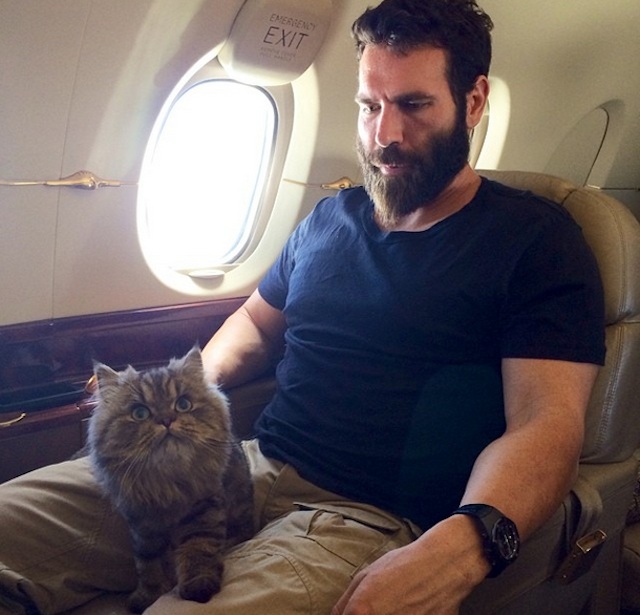 Dan Bilzerian, in a plane with a cat (Photo via Instagram)

LAX police arrested Bilzerian, 34, on an out-of-state warrant at 8:30 p.m. when his plane landed, according to LA Weekly. TMZ got their hands on the criminal complaint and found that the arrest warrant had been issued in Clark County, Nevada a month ago but had been kept under wraps. Bilzerian apparently had ammonium, aluminum powder, and ammonium nitrate mix, which when mixed together, would make TNT, according to the complaint.

He was charged with possessing an explosive or incendiary device with the intent to manufacture it. Bilzerian was booked late last night at the LAPD's Pacific Division, and is being held without bail.

Bilzerian, who is popular on Instagram with over 5.7 million followers, is known for posting photos of his lavish lifestyle, with a good number of them being snapshots of him in fast cars, on yachts with women in thong bikinis, and his collection of guns and rifles. He was an ex-Navy Seal candidate who had got out of his program just days before graduating.

This arrest comes on the heels of Bilzerian recently making headlines for allegedly kicking model Vanessa Castano in the face at LIV nightclub in Miami Beach, reports TMZ. He was banned from the club and she has since filed a police report. Nik Richie, the founder of a website called TheDirty.com, posted an Instagram video that night, with the caption:

This will probably make @danbilzerian more famous but I really don't care. He got kicked out of a famous Miami nightclub last night for assaulting a woman. This idiot kicked a woman in the face like it was no big deal. It's sad when you think you're invincible to society. To all you #danbilzerian worshipers thanks for the support. It's obvious Fake Equis is a Ravens fan. #RayRice — I heard the girl called the police and this American hero ran before the cops showed up. Classy right @steveaoki

2 girlz attacked a girl I was with to the point they gave her a black eye and threw her off the table and went after her, b/c they wanted to get closer to me. I know girls never fight over you b/c you're a loser and everyone hates you, and nobody wants to fuck you, but how about you get your facts straight instead of publishing nonsense like your garbage website.

Update 4:55 p.m.: An official at the L.A. County jail’s inmate reception area told KTLA that Bilzerian was released at 1:16 p.m. today, despite reports that said he was supposed to be held without bail. Also, the official said that the charges were dropped; however, Clark County District Attorney’s Office spokeswoman Audrie Locke tells KTLA that the charges have not been dropped, and that she doesn't know why Bilzerian was released.

The L.A. Times reports that Bilzerian is scheduled to be arraigned in a Clark County court in January.