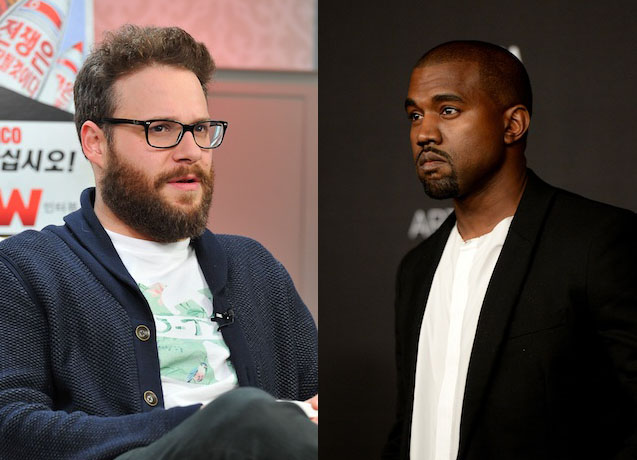 Seth Rogen and Kanye West have had some surprisingly positive developments in their friendship over the past year. They've broed out so much that West (being West) apparently rapped his entire unreleased new album to The Interview actor in a limo.

In a recent interview with Rolling Stone, Rogen described the experience:

...West cornered Rogen at a New York hotel and invited him to his limo van for a listening session with a twist. "There's no lyrics, only beats," Rogen said. "So he raps the whole album, and after each song, he stops it, like, 'So what do you think?' We were in the van for two hours!"

When Rogen and his buddy James Franco filmed a parody of West and Kim Kardashian's over-the-top ridiculous "Bound 2" music video last November, instead of hating it, the couple took it in stride. Kardashian even praised it on Twitter, saying "You nailed it!!! Sooo funny!" She later added, "Kanye says what's up! He loves u guys! He laughed so hard at this."

Franco said in an interview on ABC's The View in April that West enjoyed it so much that he even asked the two actors to perform it at their wedding.

In September, West hosted a listening party for his soon-to-be-released album (which doesn't have a release date just yet) in Paris, according to Consequence of Sound. Rapper and singer Theophilus London Instagrammed a photo of himself with West, with the caption: "So shortly after this picture I Only remember kanye playing his new album 3 times in a dark room of 20 people last night and moshing drunk with mad babes haha."

You be you, Kanye.