Finally, There's An App That Breaks Down Koreatown Food And Brings It To Your Door 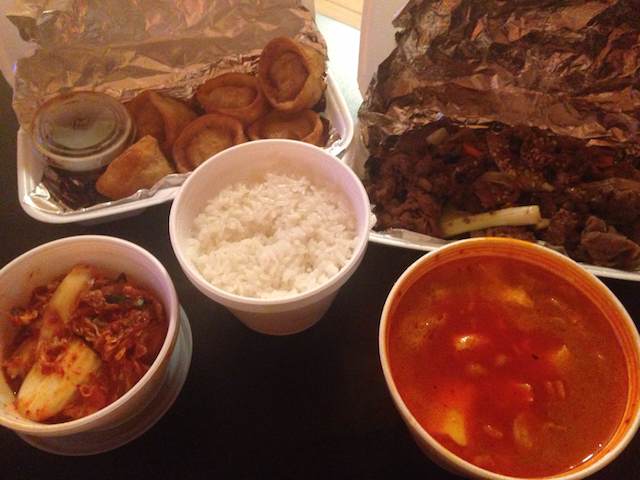 If you live near Koreatown, then you know you have a bevy of delicious food options in any direction. However, you might have noticed that many Korean restaurants aren't popping up on most mobile delivery apps. Some don't offer menus in English and can be intimidating to the non-Korean speaker. RushOrder has specifically targeted Ktown to provide the easy order and delivery of authentic meals from over 50 area restaurants.

Henry Choi of RushOrder said that the company decided to hone in on the Koreatown scene only recently, though the app has been around since winter of 2014. He and several other team members grew up or lived in Koreatown and were familiar with the cuisine, and were able to curate a list of the best restaurants to approach.

"One of our goals is to make Korean food more accessible to the non-Korean speaking demographic with translated menus, and by avoiding the need to call in orders, which may present language barrier issues for a lot of these places," he told LAist.

RushOrder's Eric Kim said that Koreatown has been an untapped market for delivery apps for the past decade, pointing out that GrubHub's been around since 2004 (before Facebook!). And while these other apps can get you great Thai food or a pizza, or even $20 worth of milkshakes, Korean cuisine tends to be absent. Similarly, Kim said that RushOrder also wants to tap into the other similar markets, like Chinatown or the San Gabriel Valley, for the same reason.

"There are also a lot of hidden treasures that won't be on these other mobile apps," he said.

RushOrder invited us to try their app out, so last night we put in an order at one of their recommendations, BCD Tofu House. Other restaurants on the list include the German-Korean fusion of Biergarten, Korean fried chicken joint KyoChon, numerous other traditional Korean eateries, as well as non-Korean restaurants offering sandwiches, Brazilian fare, desserts and more. Admittedly not as intimating as for a non-Korean speaker as some of the other eateries in the neighborhood, BCD Tofu House does have several traditional Korean options. We tried the kimchi dumplings, original soon beef tofu stew and the galbi (bbq short rib).

The app showed me when the order was received, when it was being prepared and when it was ready for delivery. I also received a text that let me know when the driver was on his way.

The food came hot and neatly packaged in less than an hour, and I was able to pay and tip all using my phone. There is a small service fee added to the total (ours was $0.89, and some restaurants may also charge a delivery fee.

RushOrder is available for download now on both iOS and Android platforms. The app is free.