We found a number of notable happenings in November, so we're ready to help you plan your social calendar. Read on for all our event picks and details.

MUSIC FEST: Red Bull Sound Select Presents: 30 Days in LA starting on Saturday night with Gemini Club and Wrestlers opening for Cut Copy at The Luxe Hotel Parking Lot. Red Bull brings 60 music acts (from San Fermin to Death from Above 1979 to Chet Faker) to 30 different venues throughout the city. There's even a concert at Madame Tussauds.

MUSIC: KROQ sponsors a Clockwise residency at the Satellite for three Wednesdays and one Thursday beginning on Nov. 5. Check out Clockwise's Nov. 5 show for the debut screening of the video for "Hopeless" plus a DJ set by KROQ's Kat Corbett. Tickets: $10. The shows are 21+.

FILM FEST: AFI Fest 2014 takes over the Dolby Theatre, the TCL Chinese Theatres, the Egyptian Theatre and the Hollywood Roosevelt Hotel from Nov. 6-13. Several highly anticipated films anchor the festival, including A Most Violent Year (director J.C. Chandor), Inherent Vice (director Paul Thomas Anderson), The Gambler (director Rupert Wyatt), Foxcatcher (director Bennett Miller) and The Homesman (director Tommy Lee Jones). Dozens of other features, documentaries and short films round out the slate. There are free individual tickets to many of the screenings, but passes guarantee admission (and run from $375-$5,000).

FILM + TALK: The Hammer Museum presents Love Has Many Faces: An Evening with Joni Mitchell on Nov. 6 at 7:30 pm. Mitchell introduces a screening of The Fiddle and the Drum, a ballet film set to the songs of Joni Mitchell and choreographed by Jean Grand-Maître of the Alberta Ballet Company. "The ballet reflects Mitchell's lifelong concerns about the Earth's ecological destruction and human warfare through sound, movement, and video installation." There's a post-screening discussion, and since it's also Mitchell's birthday, a celebration in the museum's courtyard follows. Free.

LA CONFERENCE: de Lab, one of the city's leading design education nonprofits, presents its first Making LA Conference from 9 am to 5 pm on Nov. 7 at the Los Angeles River Center and Gardens. Part design conference and part urban exploration, more than 30 speakers will discuss four critical areas currently facing L.A.: Water, Transportation, Community and Density. Guests from "Moby to the Mayor of Compton, will explore the projects and visions currently shaping the future of Los Angeles."

BENT-CON: Now in its fifth year, Bent-Con 2014 (Nov. 7-9) is a convention for gay comic book, sci-fi, fantasy and horror fans, bringing them together with LGBT and LGBT-friendly comic-book artists, writers, creators, publishers, directors and producers. In addition to the vendors in the exhibition hall at the Burbank Marriott Convention Center, hear panels, speakers and other programs that explore LGBT storylines and characters. One highlight this year is the comedy/variety show The Dinner Party Show, hosted by Christopher Rice and Eric Shaw Quinn with special guest Anne Rice. Passes: $25-$45 for single days; $60-$70 for three-day pass.

DESIGN CONVENTION: DesignerCon 2014 returns to the Pasadena Convention Center on Nov. 8-9 featuring two days of toys, art, apparel, ephemera and more. The convention is a great mixture of pop, urban, street and underground art with more than 300 vendors. There are also art shows, panels, presentations and exclusive releases during both days (Saturday, 9 am-6 pm and Sunday from 10 am-5 pm). Admission: $5-$7 per day or $10 for both days.

THEATER: The Hyprocrites, a Chicago-based theater company, performs a 12-hour staged reading of their theatrical adaptation All Our Tragic. Held at the Getty Villa on Nov. 8 and 9, the performance is broken into two, six-hour installments that "combines the 32 surviving Greek tragedies into a single epic narrative by dividing the plays into four themes consisting of two acts each. The themes include pyromantics, politics, patriotics, and poetics. The performance creates a modern festival of Dionysus, the immersive, durational-theater experience of the Ancient Greeks, designed to encourage civic conversation about important contemporary topics by incorporating music, politics and eating." All Our Tragic runs 11 am to 5 pm each day with a lunch break and intermission. Tickets: $25 per day or $45 for both.

ART: More than 60 Inglewood artists open their studios to the public on Nov. 8 and 9 for the 8th annual Inglewood Open Studios weekend. The artist-run, self-paced tour features art in all media, including drawing, painting, sculpture, mixed-media, photography, printmaking, installation, video and performance. Free shuttles will be provided by the city of Inglewood at various stops along the tour, which runs from 12-5 pm. 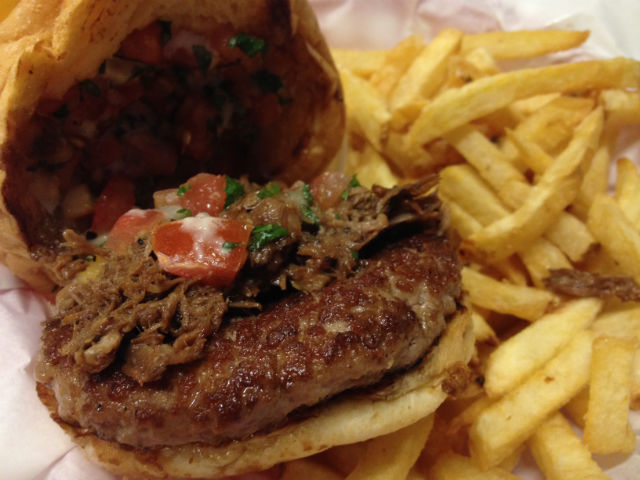 The Oinkster is one of the participating restaurants at the East Side Food Festival. (Photo: Adobo burger, by Christine N. Ziemba)

LIT AWARDS + FESTIVAL PEN Center USA helps protect the rights of writers around the world, and on Nov. 11, the organization celebrates with its 24th annual Literary Awards and Festival. The gala is being held at the Beverly Wilshire Hotel and hosted by Aisha Tyler. Amy Poehler presents Norman Lear his Lifetime Achievement Award. Cocktails at 6:30 pm and dinner and the program begins at 7:30 pm. Tickets: $400-$5,000.

MUSIC FEST + CONFERENCE: YouBloom LA is a music festival and conference taking over venues in Northeast L.A. and Pasadena. During its run from Nov. 13-15, 80+ live bands play at The Highland Park Ebell Club, La Cuevita, Cafe Nela, Griffins of Kinsale, The Old Towne Pub and many more. The conference, which tackles topics about the music business, takes place at The Highland Park Ebell Club. The program segments include: PR & Social Media Marketing Skills; Brand Creation and Control of Multi-Platform Content; Record Keeping and Taxation in Music; crowdfunding and more. Conference price: $25, $15 to students 21 and younger. The gigs are free.

DIANE VON FURSTENBERG: Legendary fashion designer Diane von Furstenberg talks about her new memoir, The Woman I Wanted to Be, on Nov. 18 at the Skirball Cultural Center. Presented as part of Book Soup at the Skirball, she'll discuss her childhood in Brussels to her 1972 entrance to the fashion world to overcoming cancer. A book signing follows the event. Tickets: $30+ tax and includes a copy of the book. 7 pm.

ANIMATION FEST: Cinefamily presents Animation Breakdown 2014, a festival of international animation, including shorts and features from a mix of both old and new works. The festival opens on Nov. 20 with Son of the White Mare a "pop-art fairy tale with an incredibly unique style and sound design, from Hungarian animation wizard Marcell Jankovics ." It closes on Nov. 24 for a program with jazz luminary Bob Dorough—the composer/singer of Schoolhouse Rock—for an intimate performance of songs from the series. Tickets for each program: $12/free for Cinefamily members.

NO BUDGET FILM FEST: No budget? No worries! cARTel: Collaborative Arts LA (the folks behind Brokechella) presents The 5th Annual No Budget Film Festival, which takes place at Mack Sennett Studios on Nov. 21-23 in Los Angeles. The program includes 33 films, with The Past is a Grotesque Animal opening the festival on Nov. 21. Tickets: $10 for screenings, panels or workshops, $20 for opening and closing galas (includes food and drinks) and $85 for a pass for the entire weekend.

AUTO SHOW: The Los Angeles Auto Show returns to the Los Angeles Convention Center and is open to the public from Nov. 21-30. Organizers are expecting nearly 60 debuts of new vehicles. Check out the trends and innovations in upcoming models and vehicle categories (luxury, performance, hybrid, electric, hydrogen fuel-cell etc.). Tickets: $5-$15, with passes at $75.