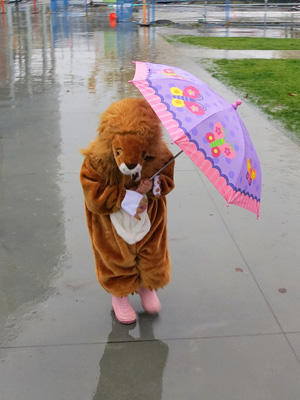 Rain on Halloween makes us all sad lions (Photo by ruthanddave via the Creative Commons on Flickr)
In a best-news-worst-news scenario, it looks like it’s finally going to rain in Southern California. But it’s going to happen on Halloween.

L.A. County will likely see scattered showers by midday Friday, with a 70 percent chance of rain Friday night, according to the National Weather Service. There’s a 20 percent chance the rain will last through Saturday, but it doesn’t look like it will continue after Saturday.

So that sucks. But at only a half-inch of rain forecasted for L.A., you can still head out with an umbrella. And we definitely need this rain.

Temperatures will also be four to seven degrees lower than today, in the 60-to-low-70 range, so pack a jacket along with that skimpy costume. The NWS also points out that roads could be extra slick since due to months of oil build-up on roads, since there hasn’t been significant rainfall in a while. So, along with dealing with all the drunk drivers out there on Halloween, be extra careful.