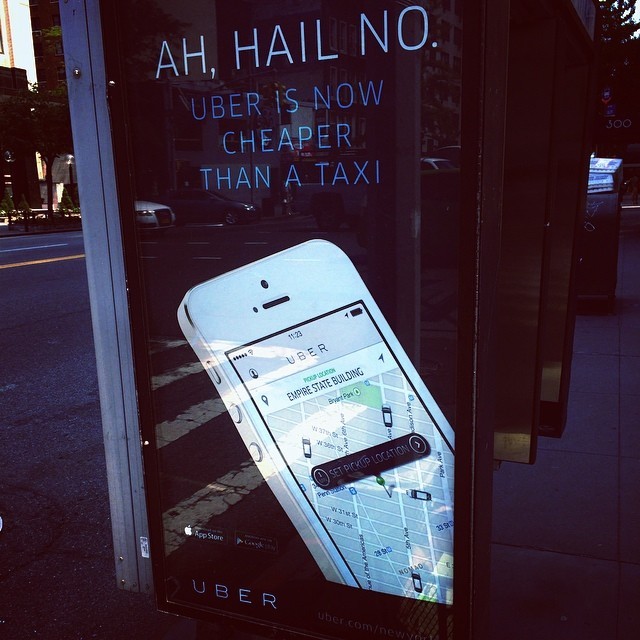 "Ah, hell no." Really. (Photo by Jason Newport via the Creative Commons on Flickr)

An Uber passenger in Los Angeles says her driver recently took her on a frightening ride that was nearly 20 miles out of the way to a dark, abandoned parking lot before bringing her home. And when the woman told Uber's customer service about the harrowing incident, she claims they glossed over the fact that she was kidnapped and only apologized for the "inefficient route."

However, Uber says there's a different side to that story. Uber representative
Eva Behrend told LAist: "Early reports on this ride are inaccurate. Based on the information we have at this time, this driver called 911 to ask for assistance with an intoxicated rider who requested an extended trip. However, we have refunded the rider's trip and reached out to the rider for additional information."

The woman, who is shaken up by the ordeal and doesn't want to be named, told Valleywag that she left a party early that morning and ordered an Uber. She entered in her home address in the ride-sharing app before she was picked up at 4:48 a.m. However, she claims the driver took her completely out the way—almost 20 miles out—to an empty parking lot. She profusely complained, and when she tried to get out of the car, the driver allegedly locked the doors to stop her from leaving. But it wasn't until she started screaming that he took her home, the woman says.

Valleywag posted a screenshot of the woman's phone (which can be seen here), that shows the out-of-the-way route. It appears that she was picked up in Westlake, taken to Eagle Rock, then the Valley before she got dropped off in Eagle Rock. It also shows that the ride took nearly two hours.

When the woman contacted Uber about her freaky situation the next day, she says the only response she got back from customer service was an email apologizing for the "inefficient route" and saying that they made a "fare correction"; they refunded part of her fare. However, the next day, Uber reportedly refunded the full amount, still with no mention of what had happened to her.

The woman told Valleywag that she is now working with an attorney and the LAPD.

This isn't the first time that Uber passengers have complained about their rides with the company. In San Francisco, one Uber passenger says his driver attacked him with a hammer. Closer to home one passenger complained that her Uber driver would not let her out of the car until he gave himself a five-star rating on her phone. A woman claimed in December that her Uber driver wouldn't give back her iPhone she left in his car unless she gave him $500.

Uber has received a lot of complaints about surge pricing and overcharges. Back in August, Uber passenger Alan Dumpit told LAist that his driver promised him a low rate and charged him and his friends a whopping $814. Dumpit says he had a hard time getting Uber customer service to acknowledge the real problem at hand or even find a live person to talk to. However, Uber eventually refunded him the premium charges he and his friends were billed.

The Better Business Bureau have given the ride-sharing app company an 'F' rating partly due to Uber's failure to respond to some of the complaints (with several of them on surge-pricing) that they've received.