12 Cool New Video (And Real-Life!) Games We Tried And Loved 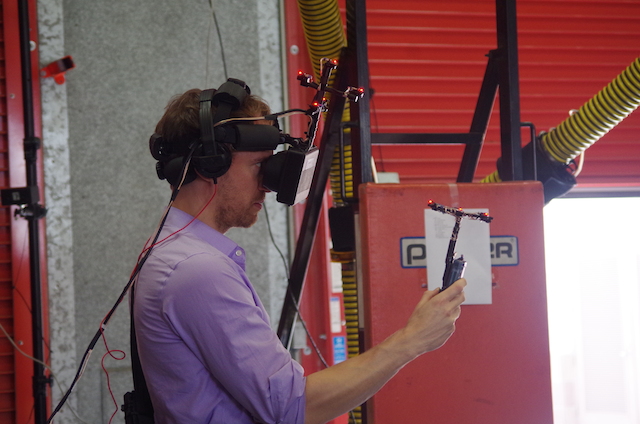 IndieCade, an annual gaming conference with a focus on independent games and developers, rang in its seventh year in downtown Culver City this past weekend. Over 150 games were on display and up for play, including video games, virtual reality, board games and alternative sporting matches held in real life. While there were still your traditional video games about slashing and shooting your way through monsters, there were also several thoughtful games dealing with politics, science and topical situations like 'sexting.' We stopped by on Sunday to check it out. Below are a few games we enjoyed.

Use of Force: This was not a light-hearted or fun game. Former Newsweek journalist Nonny de la Peña presented a jarring virtual reality film that recreated the death of Anastacio Hernández-Rojas, who was beaten to death by border police at the U.S./Mexican border near San Diego. She calls the experience "immersive journalism" as it allows the user to observe the story from the point of view of a bystander. She has another such work called Hunger in L.A. that tells the story of a homeless man who suffered a seizure at a food bank, only to be mocked by first responders, using audio from the incident, Fast to Create reports. A portion of Hunger in L.A. can be watched without a VR headset here.

Antimatter Matters: This board game comes from Portland's Elbowfish, a company comprised of David Galiel and his daughter, designer Leana Galiel. Anitmatter Matters teaches quantum physics by asking players to find all the components to build an atom. While collecting quarks and what-not seems simple at first, other players can use the laws of the universe to thwart you. This game can be ordered online along with their other board game, Jux, which has players building a narrative with an infinite number of possible story arcs.

Soulfill: This an odd game that stands to make some people very uncomfortable. The simple mobile app from developer Jason Marziani of Little Wins challenges the player to make eye contact with strangers. Specifically, the game is meant to be played on a subway, like those found in Marziani's hometown of Philadelphia. You can download the app on your phone (it's free on iOS and Android), then you'll use headphones to listen to the game's commands. For your first quest, you'll hold your phone at your side, double tapping to keep a tally of each time eye contact with a stranger is made. Challenges and interactions vary as the game goes on.

FRAMED: This upcoming puzzle game for iOS and Windows is simply played, clever and a lot of fun. The game is a noir-style comic and you're trying to evade capture. You must move the panels around to achieve a favorable outcome, or you risk getting caught...or worse.

Tumball: Tumball, produced by Tender Claws, is pretty ridiculous, but worth it. You have a 'ball' that looks like a tumbleweed, and each player has a leaf blower. And with these items, you play an oversized game of croquet. Its operating system is "real life." You can't buy your own pre-fabricated Tumball (yet), but you can find or fashion one. If you do, here are the Tumball rules. 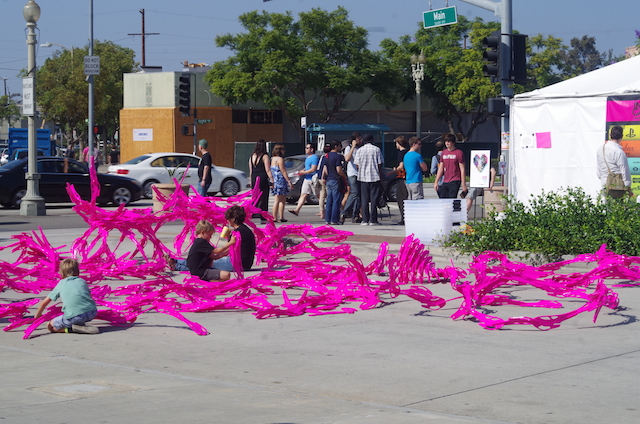 Bloom - The Game: A number of plastic pieces, all identical, can be used to create a variety of shapes. This game, which can be openly played by the public, was developed by Alisa Andrasek and Jose Sanchez from The Bartlett School of Architecture at UCL in London. The structure grew over the course of the afternoon as people stopped by to build. You can buy your own pieces online and make a fort.

Sext Adventure: This was an odd one, and one for adults only from developers Kara Stone and Nadine Lessio. Send a text to a provided phone number, and you're led through a Choose Your Own Adventure-style courtship with a bot who, if you're lucky, sends you a naughty, pixellated image. But, the raunchy game doesn't come without some robot philosophy. Want to play? Just text anything to 323-489-3406 to begin.

Sunder: This PC game from DigiPen Team Mocha is a puzzle platformer where two players battle monsters and maneuver around obstacles. However, there's one big difference. Sunder requires two players. Each player wears either red or blue-tinted glasses, and therefore, can only see one half of what's going on. Players have to work together to help each other navigate the world and beat the monster boss, as only one player can see their enemy. This game was created by DigiPen students Eduardo Chaves, Nicholas Fuller, Kai Hsiao and Kenneth Tan.

Keep Talking and Nobody Explodes: Much like Sunder, communication is key. This upcoming indie game is for PC and Oculus Rift. One player, who is wearing a VR headset, can see a bomb which must be disarmed. However, that player does not have the manual. The player's teammates do; however, they can't see the bomb. Keeping calm seems to be a great strategy, but we observed a lot of yelling and laughing from this part of the room.

Elbow Room: As many people as can fit around a standard keyboard (PC or Mac) can play this game from Deep Dark Hole. Each player gets chooses one key on the keyboard. The keys appear around a circle on the monitor with a needle in the center, much like a clock. When the needle moves over your letter, you press your key. This seems simple at first, but players can double-tap and reverse the needle. Miss your turn three times and you're out.

Nova-111: In this turn-based puzzle game, you are a scientist exploring a world full of monsters as you look for your fellow scientists who are in dire need of rescue. You tunnel through rocks and learn the various ways in which you can defeat your enemies, a lot which has to do with the way time moves, and the way that can change. This game will be available for play on PC/Mac/Linux and consoles in 2015.

Metrico: A little man runs around, trying to navigate infographics that change with his every move in this recently released Sony Playstation Vita game. There's probably at least one person your holiday shopping list that deals with infographics all day long, right? This well-designed game is harder than it looks.

Check out all the games from this year's IndieCade here.