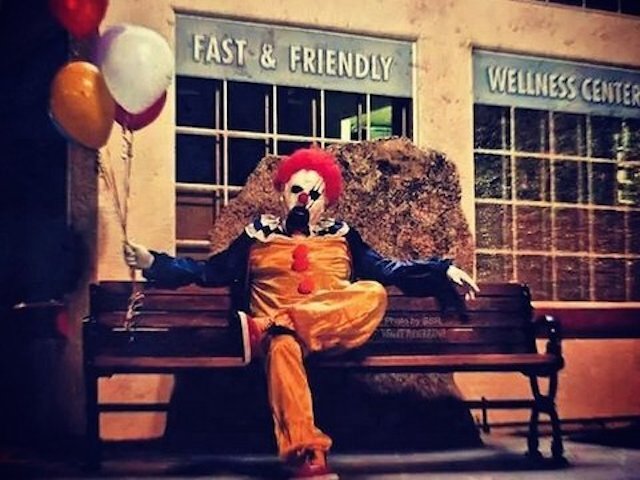 The mysterious Kern County clowns have not gone away, and in fact, may be getting creepier.

The 'Wasco Clown,' the OG Kern County clown if you will, turned out to be a husband and wife doing an art project together. He'd dress up like a clown clutching a handful of balloons, she'd take creepy photos of him lurking in the dark and they'd post the photos to social media accounts. They told Kern Golden Empire they intended to post photos of the clown throughout October.

The ominous clown worked to stoke the Halloween spirit, but then, other clowns started popping out of the proverbial woodwork. These clowns appeared in Bakersfield and Delano, and along with them came urban legend-style reports of clowns carrying bats, machetes, axes and even a gun. The Wasco Clown couple said they are not proponents of violence, and they have nothing to do with these other clowns.

Saturday night, police were told that a clown with a gun was hanging out near Valhalla Drive and Belle Terrace in Bakersfield at about 8 p.m., L.A. Times reports. Police did not find the clown. One child recently said he was chased by a clown carrying an axe, though that report has not been substantiated.

One clown was caught chasing teenagers around and was arrested on suspicion of 'annoying a minor' last week. That clown turned out to be a teen himself, who told police that he was just copying the other clowns.

Baskerfield Police Sgt. Joseph Grubbs is just tired of all this clowning around. He told the L.A. Times that they've received about 20 recent reports of armed clowns, and that police fear the situation could escalate. "We will make arrests on this. We want this to stop," he said.

Any Bakersfield Captain Spauldings or Pennywises out there who were prepping their Halloween costumes might want to rethink their outfits.