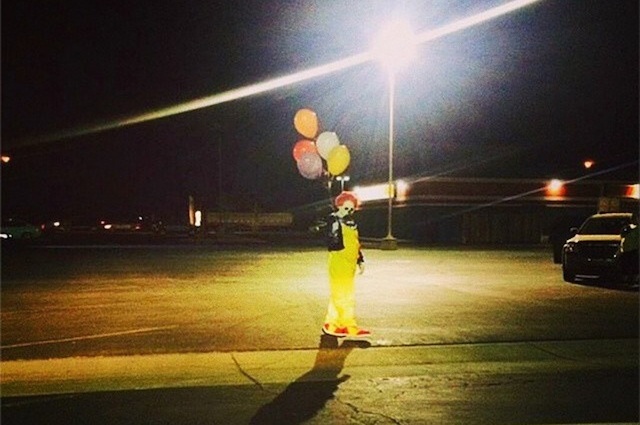 He prowls the streets at night (Photo via Instagram)

The Wasco Clown has been terrorizing (or delighting) our neighbors to the north in Kern County by wandering around late at night since October 1. He's even got his own Instagram account, where he can be seen prancing around with a fistful of balloons.

Where should I go tonight Bakersfield 🔪🔫 Delano 🔫 Wasco 🔪

Being October, the clown isn't necessarily so out of place, and he's garnered a number of responses on social media and in real life, with several people in Wasco saying they've spotted him around the small agricultural town northwest of Bakersfield, Kern Golden Empire reports.

Some people are terrified:

Others, not so much:

that wasco clown is a fake bitch

Not to be outdone, Delano and Bakersfield have their own clowns. The Delano clown appears on the Wasco Clown's Instagram, and is a totally different clown. While it's not clear if these two clowns are the same person in different costumes, the Instagram account claims that there are multiple clowns. In fact, the account says, they're "all over."

The clown has already managed to achieve urban legend status, as a boy in Wasco claimed he was chased by the clown, who was wielding an axe. Others said they saw the clown committing unspecified crimes, though so far, the Kern County Sheriff's Department says these reports are unfounded.

Others say that the clowns are just trying to get people in the mood for Halloween. If that's the case, it appears to be working.

Haha I have to admit this Wasco Clown is freakin genius. pic.twitter.com/KHPhQDSNPO