Twin Peaks Is Making A Damn Fine Return In 2016 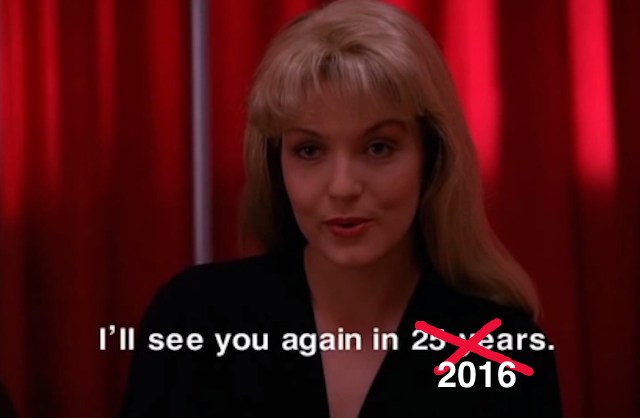 Last week Twin Peaks creators David Lynch and Mark Frost both Tweeted the same thing, at the same time: "Dear Twitter Friends: That gum you like is going to come back in style! #damngoodcoffee." With this being the 25th year anniversary of Laura Palmer telling Agent Dale Cooper: "I'll see you again in 25 years," fans of the show rightfully got excited for a comeback. This morning the duo returned with a less cryptic message—"it is happening again"—linking to this YouTube video showing Laura Palmer, the words "25 years later," and eventually those familiar notes from Angelo Badalamenti:

The show is returning as a limited series on Showtime. According to Deadline, the "nine-episode series will go into production in 2015 for a premiere in 2016 to mark the 25th anniversary of when the series finished its run on ABC. In a fact that will delight Twin Peaks devotees, Lynch and Frost will write and produce all nine episodes, with Lynch set to direct every episode." They believe it "will be set in the present day, more than two decades after the events in the first two seasons [and will] continue the lore and story of the original series." And it's a pretty safe bet that damn fine Kyle MacLachlan is on board:

Hanging at lunch with my pal DKL supporting the work of the @LynchFoundation. Great afternoon! pic.twitter.com/TYzHnWZc0W

UPDATE: Lynch and Frost released a statement saying, “The mysterious and special world of 'Twin Peaks' is pulling us back. We’re very excited. May the forest be with you.” According to Showtime (via via Hitffix), they will air the previous two seasons leading up to the return.