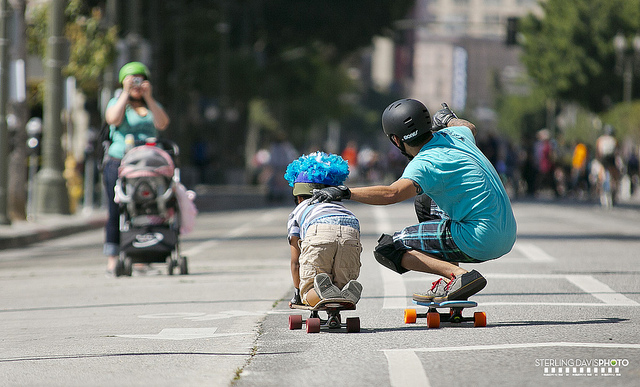 LAist gets a lot of event announcements, and we comb through them all to bring you a curated list of what’s happening in LA this weekend, including these 24 events. Check out our October Guide for details on additional events this weekend like CicLAvia, the Engadget tech event and more.

We'll be back on Monday to help you plan the week ahead.

ART + BOOKS: La Luz de Jesus presents How many artists does it take to screw Henry & Glenn? It’s an exhibition and book signing of the art of Henry & Glenn Forever & Ever, featuring art by Tom Neely and more than 50 contemporary and underground artists. The subjects of Neely’s comic book are Henry Rollins and Glenn Danzig (with a little help from Hall and Oates). The graphic novel is a tongue-in-cheek romance/love story between the music icons. The exhibition features “dozens of pinup art and full-color covers from the original series along with many original comic art pages and new pieces inspired by Henry & Glenn.” The artists’ opening reception is on Friday from 8-11 pm. The works remain on view through Nov. 2.

DANCE: The Getty presents two works by dancer, choreographer and filmmaker Yvonne Rainer, Oct. 3 and 4 at 7:30 pm, in conjunction with the exhibition Yvonne Rainer: Dances and Films. The works include a new in-progress commission as well as a recent piece. Tickets: $15-$20.

COCKTAILS: The Art Deco Society of Los Angeles (ADSLA) meets once a month for Cocktails in Historic Places. This month, ADSLA meets at the Federal Bar in NoHo with a no-host bar. Learn about the history of the location, network and socialize with ADSLA members and nonmembers. Come early for a happy hour at the bar from 3-6 pm. The event is free to attend.

VARIETY: Carpe Noctis bills itself as "The Darkest Vaudeville Show in Town" with twisted and outrageous acts. The show has an eight-night engagement (four weekends) beginning this Friday and Saturday with shows at the Complex Theatre in Hollywood. The festival experience runs from 10 pm-3 am in two-to-four theatres simultaneously, featuring twisted burlesque, knife throwing, Coffin Cabaret, ballerinas & machetes, games, EDM, sound and visual installations and more. Tickets: $15-$22.

INDIE FILM: The Sublime and the Beautiful, a feature that premiered at Slamdance, examines grief when a tragedy strikes David Conrad's family in the days before Christmas. His marriage is near its breaking point and his “desire for retribution leads him into uncharted moral territory with the question: what can we forgive?” The film plays exclusively from Oct. 3-9 at Arena Cinema. The 6:30 pm Friday show features musical songs by Lili Haydn followed by Q&A with director Blake Robbins. Tickets: $10.

BOOK SIGNING: On Saturday at 2 pm, Dark Delicacies in Burbank hosts a signing for the autobiographical My Faces of Death by John Alvin Schwartz. When Faces of Death hit video, it was a rite of passage to watch it. The film purportedly showed clips of human deaths (this is before YouTube, remember), and spawned numerous sequels from Schwartz.

SONGWRITING: Now we don’t know a lot about this show, but we hear that Top Tunes’ The Songwriters Game at Busby’s East features songwriters banging out songs in 17 minutes. The songwriters are: Annie Boxell, Billy Kent, Adam Michaelson,, Stefani Scovolo, Anthony Starble and Ted Wulfers. Contest commentators are Eric Schwartz, Suzanne Whang and Paul Provenza. 8 pm. Tickets: $10 at the door.

MUSIC: Said the Whale play the Bootleg HiFi on Saturday night with opening acts Irontom and Badflower. Door at 8 pm, music starts around 9 pm and tickets: $12.

MUSIC: The funk-punk-rock band Living Colour are celebrating their 30th anniversary with a new album, Shade, and a tour. The group (singer Corey Glover, guitarist Vernon Reid, bassist Doug Wimbish and drummer Will Calhoun) plays the Roxy on Saturday at 8 pm. All ages show. Tickets: $30.

FILM: Saturday is going to be great at Cinefamily. First up, they’re going to show a Lon Cheney silent double feature with West of Zanzibar, followed by The Unknown at 1 pm. Later that night, SpectreFest continues with a Nacho Party—with works by director Nacho Vigolondo. At 9 pm, they’ll screen the L.A. premiere of Open Windows, with Confetti of the Mind: Nacho Vigalondo Shorts. In person: Vigolondo, and cast member Sasha Grey, plus Elijah Wood via Skype. Tickets for each program: $14, free for members.

PERFORMANCE ART: In conjunction with Doug Aitken's Still Life exhibition, Regen Projects presents a the artist’s site-specific performance on Saturday from 4-8 pm. “Stretching two blocks of Santa Monica Blvd (between Highland Blvd and Las Palmas Ave), the performance will feature LA-based street sign spinning performers and text written uniquely for this work.” A book signing of Aitken's 2014 monograph 100 YRS happens concurrently with the sign spinning from 6-8 pm on the rooftop of the gallery.

THEATER: Fell Swoop Playwrights presents Haunted: A Weekend of New Plays on Oct. 4 and 5 with works featuring secrets, ghosts, family curses and fallen fruit. There are different staged readings each night, including one short piece and one longer piece. Saturday: Hope House by Kyle T. Wilson, Broadripple is Burning by by Korama A. Danquah. Sunday: Wet by Abbe Levine, Picture Perfect by Michelle Meyers. At Spirit Studio Silverlake (enter through parking lot behind Barbarella's). Doors at 7 pm, with readings at 7:30 pm. Free, but donations welcome.

ART: The William Grant Still Arts Center in West Adams opens Return of the Mecca: The Art of Islam and Hip-Hop, a new art show on Islam and hip-hop, from its early jazz roots and the golden age of hip-hop through to today. The collection includes 200 LPs and cassettes, a media room, and rare archival clippings, posters, footage, original photos by Jamel Shabazz, Ernie Paniccioli, Eric Coleman, B+ and others. The show, part of the citywide LA/Islam Arts Initiative, runs through Nov. 22. The opening reception is on Saturday from 3-6 pm.

TV: The Paley Center holds weekend screenings of TV shows from the archives and on Saturday and Sunday, the center screens Superhero Classics at 2 pm. On the program: The Adventures of Superman: "Superman on Earth" and "The Perils of Superman;" Batman: "The Purr-fect Crime" and "Better Luck Next Time;" The New, Original Wonder Woman. Free with admission.

BIKING: CicLAvia returns to a completely different Heart of L.A. route on Sunday, Oct. 5 between 9 am and 4 pm. This edition’s path traverses familiar parts of DTLA, but extends to Echo Park, the Broadway Theater District, Boyle Heights and into East L.A. The streets are closed off for you to ride, walk, board (anything without a motor) for free. Participate at your leisure for as long as you (and your legs) want. There are plenty of places to pick up eats, drinks or other treats along the way.

VARIETY: Famous Monsters of Filmland and Captured Aural Phantasy Theater present Come Aboard Our Lovecraft at El Cid on Sunday night. The troupe showcases live performances of H.P. Lovecraft stories and horror comic books performed in the style of an old-time radio/variety show with a live soundtrack and projections. Tickets: $10 at the door. Show starts at 8:30 pm.

PIE: The 6th Annual Good Food Pie Contest at the Fowler Museum is on Sunday from 2-4 pm. Hundreds of bakers will bring their pies to be judged (and eaten). Listen to DJ sets by Anne Litt, visit Fowler galleries, participate in family programs and taste pies. Free and open to the public.

CLEOPATRA: There’s an 80th Anniversary Screening & Art Show on Sunday at the Egyptian from 5-11 pm to commemorate the 80th anniversary of the premiere of Cecil B. DeMille's Cleopatra (1934) starring Claudette Colbert. The screening is at 7 pm, but there’s an art show featuring ancient Egyptian inspired "pin-ups" and a party in the courtyard with drinks sponsored by Golden Road Brewery and Diabolo French soda. Tickets: $9-13.

- Your Ultimate Guide to October Events