Being the birthplace of the movie industry and the home of Hollywood, it is our natural right as Angelenos to have one of the best selections of movie theaters in the country. There's a place for movie fans of all flavors. From swagged-out multiplexes playing the biggest blockbusters and highly-touted Oscar contenders, to retro arthouses screening double features of beloved classics and obscure rarities on 35mm, it's inevitable you'll be seeing a movie sometime this week if you live in L.A. Oh, and lest we forget that fans of horror, cult, and grindhouse films wouldn't want to be in any other city in the world with plenty of theaters hosting regular midnight screenings. So whichever one of these moviegoers you are, at least one of the following theaters will suit your needs. 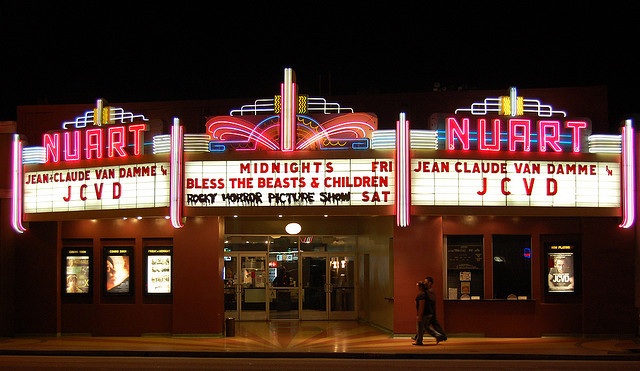 The Nuart (Photo by Burns! via the LAist Featured Photos pool)

NUART THEATRE
This single-screen theater in the Westside is the culmination of everything any moviegoer in L.A. needs. Their first-run programming is always an exclusive engagement of something high quality—be it an indie, foreign, classic restoration, or documentary film. As a chaser to any screening, you can visit Cinefile Video next door to rent nearly any movie that ever existed. On Fridays and Saturdays, respectively, the theater loosens up a bit "'round midnight" with CineInsomnia screenings of cult classics and a weekly screening of The Rocky Horror Picture Show, featuring the shadowcast Sins O' The Flesh.

NEW BEVERLY CINEMA
So you might've heard that some things changed at this place pretty recently. As a result, the New Bev did not reopen in time for us to check out the renovations, but we'd be remiss to not include it on this list anyway. Their first month of exclusively 35mm screenings looks to continue the tradition of badass programming—ranging from classic Hollywood to grindhouse double features—that made this theater such a local institution in the first place. At $8 for a double-feature, it remains the best bargain in town.

CINEFAMILY
Who says that film culture has to be stuffy and boring? Cinefamily's eclectic hodgepodge of events includes live performances, midnight movies, cutting-edge animation, and the definition-defying Everything Is Festival. If it's too schlocky, weird, or goofy for any of the other theaters on this list, then it'll screen at Cinefamily. Once upon a time their chairs were the worst seats in town, but a Kickstarter fundraiser took care of that (and also upgraded their equipment).

Cinefamily operates out of The Silent Movie Theatre at 611 North Fairfax Avenue in the Fairfax District. (323) 655-2510 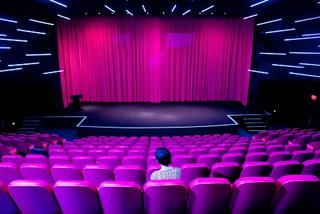 The Billy Wilder Theater at the Hammer Museum

BILLY WILDER THEATER
The home of the UCLA Film & Television Archive, the Billy Wilder boasts the best programming in town. With access to UCLA's vast film archive, every academic quarter the theater screens rarities and classics that can go as far back as the beginnings of the medium itself. In-depth retrospectives of careers, genres, or national cinemas are the best crash course in cinema history you could ever get, and don't forget to see what lost films get restored in their biennial Festival of Preservation. Our only complaint is that us taller patrons would like if it the pink seats had just a little bit more leg room.

LAEMMLE ROYAL
We long for the days when the Royal used to be a single-screen house, but times have changed and at least the Laemmle Theatres remain dedicated to screening only "quality film without regard to genre or provenance." The original screen is still there, albeit with stadium seating and two considerably smaller and cramped screens have been added to the site. While it may not get movies as major as the ones that premiere at the Arclight, Landmark, or AMC theaters, the Royal serves as the marquee theater of the Laemmle chain and almost always gets the L.A. premiere of the latest films from arthouse favorites like James Gray, Catherine Breillat, and Apichatpong Weerasethakul. 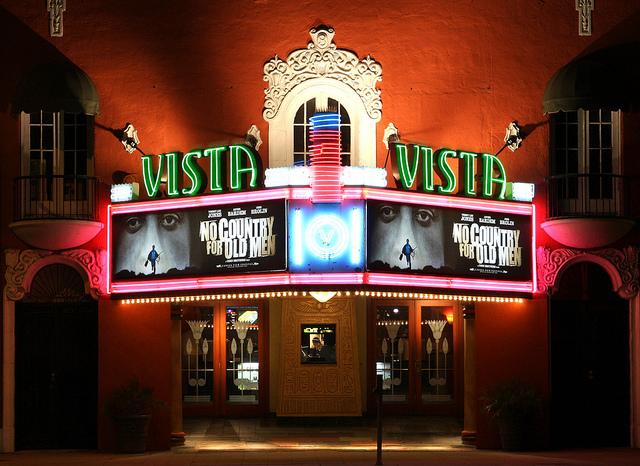 Photo by James Ian L.A. via the LAist Featured Photos pool on Flickr

THE VISTA THEATRE
A local favorite, and not just for its old-school charm. The Art Deco style movie palace remains a spacious single-screen theater, ensuring they have "the most legroom in Hollywood" while you take in the latest blockbuster through their loud Dolby Digital sound system and Sony Digital 4K projection on their 50-foot screen. Be sure to catch a movie on opening night, as "Epic Manager" Victor Martinez dresses up in costume so "the show starts on the sidewalk." Located on Sunset in Los Feliz, you're never too far from a good spot for pre- or post-movie libations and nourishment.

SUNDANCE SUNSET CINEMA
OK, so it's pretty gauche that you can get wine and a charcuterie plate served to you while you're watching a movie at this West Hollywood spot. But you have to admit, that's kind of awesome and excusable given the quality indie and arthouse fare they get as exclusive engagements. As a result, all screenings are 21+ at this tony spot. 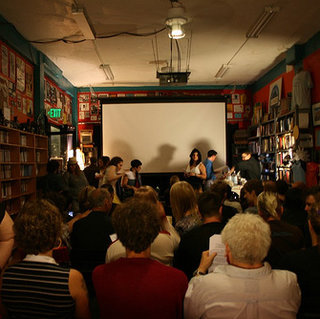 ECHO PARK FILM CENTER
This Echo Park locale can serve as a 60-seat 'microcinema' for screenings of found footage and avant-garde works on 16mm, but first and foremost it is a classroom and gathering point for budding film artists. The EPFC regularly hosts classes and workshops (free for teenagers and seniors), and can also provide you with equipment to rent and use if all you're missing from making your masterpiece is a Super 8 camera. Their Filmmobile also brings the cinema to you, with pop-up screenings and events announced the day-of on their Twitter feed.

AERO THEATRE / EGYPTIAN THEATRE
The American Cinematheque's programming doesn't run as deep as the UCLA Archive, as wild as the New Bev, or as weird as Cinefamily, but they do boast a lineup with the broadest appeal and the biggest screens among L.A.'s revival theaters. American Cinematheque's calendar probably has too many canonical Hollywood titles projected digitally for the most hardcore of cinephiles, but it's hard to complain when you're seeing Renée Falconetti's anguished face projected on the Egyptian's 50-foot screen. Also worth noting is that the (much smaller) Steven Spielberg Theatre at the Egyptian is the regular home of Los Angeles Film Forum, which brings experimental and avant-garde film to the heart of Tinseltown. 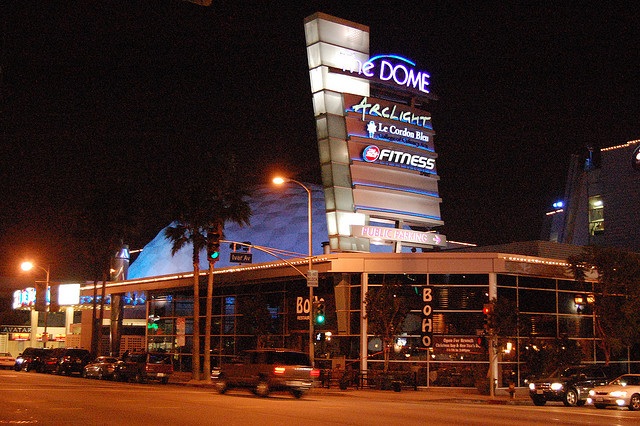 ARCLIGHT HOLLYWOOD
Sure, seeing a movie here can cost you up to $16 if you catch it in the Cinerama Dome on opening weekend. Sixteen dollars. Oh, and don't forget that parking will cost you about $3.00. And that's after it's been validated. But look, did you see the second word in the name of this theater? That's right, it's Hollywood, baby. Go big, or go home. We're talking 14 screens of plush and sparkling clean stadium-style assigned seating with THX-certified sound and state of the art 4K digital projection. This movie theater is so baller it has its own gift shop right there in the lobby. I haven't even mentioned yet that the Cinerama Dome sports an 86-foot screen. Eighty-six! Shut up, hand over your $20, and sit down. You don't watch the movies here, you let them invade every fiber of your being.

HONORABLE MENTION
The Leo S. Bing Theatre at LACMA has slightly less interesting programming ever since The Academy took over, but at least tickets are only $5 now... The Landmark does a fairly decent impression of the Arclight on the Westside... REDCAT isn't exclusively film, but they can have some amazing programs.